There are nearly 90,000 local governments in the U.S.; each one with its own fiscal and administrative responsibilities. This ‘market’ for local governments means that individuals are often able to base their choice of where to live on differing regimes of tax and service provision, and to exercise their voice to ensure that their government responds to their service needs. But does the voice of the poor matter as much as the voice of the rich in determining service levels in the local public market? Using data for municipal governments in the U.S., Benedict S. Jimenez compares the municipal budgetary choices in poor and affluent municipalities, and shows that in highly fragmented regions some services are provided the least in poorer communities, where they are needed the most.

A unique feature of the local public sector in the United States is the fragmentation of local governments. According to the Census of Governments, there were 89,004 fiscally and administratively autonomous local governments in the country in 2012. Two perspectives have dominated the debate on the outcomes of this highly fragmented system of local governance.

One view suggests that the fragmented local public sector, where there can be many local governments in one metropolitan area, approximates a market-like arrangement which provides citizens a choice of jurisdictions in which they might live, and that will satisfy their specific tax and service preferences. The ability of citizens to compare and choose among numerous local government-producers spurs competition among jurisdictions to attract fiscally desirable residents, forcing these governments to produce public services at the lowest possible cost in order to reduce local tax burdens. Competition generated by fragmentation, in this perspective, benefits citizens without necessarily making someone else worse off.

A second view suggests that the choice available in the local public market leads to the sorting of population by economic class, creating spatially segregated communities with differing fiscal wealth and unequal capacity to deliver local public services. Additionally, competition for economic development to expand the local tax base influences budgetary choices of municipalities. Specifically, municipalities in highly fragmented regions will be more responsive to the service demands of fiscally desirable and mobile actors rather than of poor households. In this perspective, competition clearly creates winners and losers among cities and their residents.

Using data from the 2002 Census of Governments and the 2000 Decennial Census, I examined the issues of fiscal disparity among, and budgetary choices of, all municipal governments located in metropolitan areas in the United States. Using a location quotient, I classified municipalities according to family income, identifying extremely rich and poor jurisdictions, as well as mixed-income jurisdictions. A poor (or affluent) location quotient that is greater than “2” means that a municipality has twice the number of poor (or affluent) families in comparison to what it would have had the poor (or affluent) were distributed across jurisdictions based on jurisdictions’ shares in the total number of families in a metropolitan area.

It is the rich, rather than the poor, who are the most segregated in the country. Of the 9007 incorporated municipalities in the sample with complete data, 11% of jurisdictions have very high concentrations of affluent families, whereas only 4% of are classified as being very poor. A large majority of municipalities in the sample, 86%, contain a heterogeneous mix of income groups (as indicated by poor and affluent location quotients of less than “2”). Figures 1, 2 and 3 classify municipalities into “poor”, “mixed-income” and “affluent” jurisdictions according to their location quotients, and present information about a number of fiscal indicators for each group of jurisdictions. All the fiscal indicators are standardized by income, and are measured as averages for each municipal group. 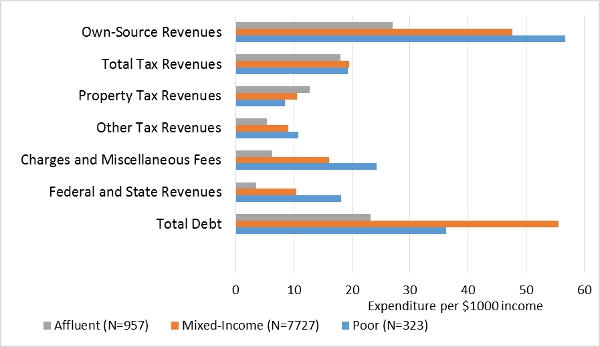 Figure 1 shows that poor municipalities raise more revenues from their own sources relative to their residents’ income. This means that families and businesses in poor localities shoulder a heavier tax burden in terms of supporting their local governments in comparison with residents and firms located in other municipalities. On average, governments in poor localities collect $57 in different types of local taxes and fees for every $1000 in private income, whereas mixed-income jurisdictions collect $48, and only $27 in affluent areas.

As for specific revenue sources, poor municipalities depend more on non-property tax revenues as well as charges and miscellaneous fees in comparison with other jurisdictions. Greater reliance on user fees and charges can lead to better allocation of resources by matching the supply of services with consumer demand. Nevertheless, this revenue source raises equity concerns especially with regard to service access by underprivileged residents. Indeed, it is ironic that user fees are one of the main sources of revenues in municipalities where a sizeable portion of the population has a greater need for government services but can least afford to pay for them. In comparison, affluent jurisdictions rely more on the property tax which is understandable given their richer property tax base.

Municipalities also support local budgets with revenue transfers from the federal and state governments, as well as through by issuing debt. In comparison with other jurisdictions, poor localities are more dependent on intergovernmental transfers. Rather surprisingly, while poor municipalities have higher debt compared to richer ones, it is the mixed-income jurisdictions which have the highest debt among the three groups. Affluent communities are the least dependent on inter-governmental revenue and have the lowest total debt relative to income.

Figure 2 shows that poor municipalities spend more on average in comparison with mixed-income and affluent jurisdictions relative to private income. Higher spending in poor jurisdictions reflects the greater need for government services among residents in these communities, and of course, lower private incomes. 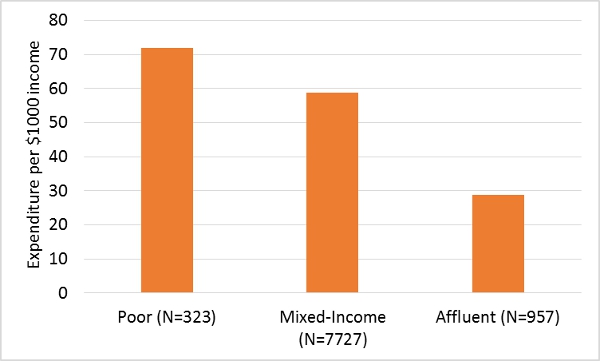 Figure 3 shows expenditures per $1000 income for a select number of services. Communities have different budgetary priorities, but in general, poor jurisdictions spend the most for different services except for public welfare, utilities and transit. In comparison, affluent municipalities spend the least regardless of service type. 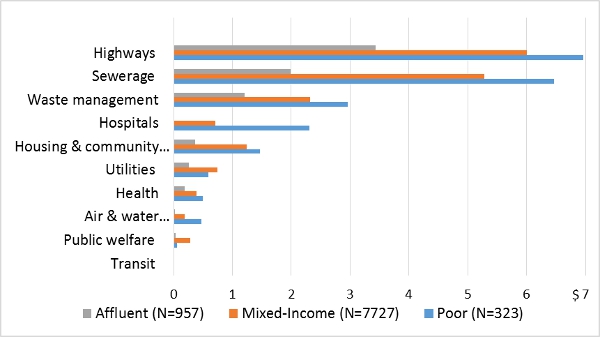 Within each type of municipality, budgetary priorities also differ. For example, poor communities spend more than one-hundred times more for highways or sewerage in comparison with public welfare services. Rich municipalities do not offer hospital or transit-related services, and spend $0.04 per $1000 personal income on public welfare, and $0.03 on air and water transportation. Similar to both poor and mixed-income communities, affluent jurisdictions prioritize services such as waste management, sewerage and highways. Most municipalities in the sample did not spend on public transit.

How does competition generated by local government fragmentation influence the decision of municipal governments to prioritize among different services? To answer this question, I grouped the direct general expenditures of municipal governments into different categories, the most important of which are developmental and redistributive services. Developmental services include sewerage, waste management, utilities, highways, transit, and transportation. These services help municipalities attract mobile capital, promote local economic growth and expand the local tax base. Redistributive expenditures, which mainly benefit the poor, include health, hospitals, public welfare, housing and community development. Because these services involve the transfer of income from well-off to low-income groups, they increase the burden for the more productive members of the community without improving local economic competitiveness. I did not include education, police and fire protection because they cannot be easily categorized.

I ran regression analyses and controlled for different factors to isolate the effects of inter-municipal competition on the budget priorities of the three types of cities. Following the market analogy, the more municipal governments there are in a metropolitan area (more fragmented), the more intense the competition among these governments. My analyses show that poor municipalities located in highly fragmented regions spend less for services that benefit the poor in comparison with poor municipalities located in more consolidated regions. In the hopes of promoting local economic development by attracting capital from neighboring municipalities, poor municipalities in fragmented areas tailor services according to the needs of mobile high-income households and firms rather than their underprivileged residents. Poor residents need more redistributive services, but responding to residents’ needs requires higher taxation which in turn can drive away high-income groups.

In fact, regardless of income classification, all types of municipalities in fragmented areas spend less for redistributive services. All types of municipalities in more fragmented regions also spend more for developmental services compared to cities in highly consolidated regions. In the highly competitive environment of the fragmented metropolis, providing for the needs of businesses and high-income taxpayers seems to matter the most for local officials.

In metropolitan America, fiscally wealthy communities co-exist with impoverished ones. It is important to emphasize however, that spatial economic segregation—at least, as measured at the municipal level—is not that severe. The results show that different income groups, more or less, are dispersed across a greater number of jurisdictions. Although segregation festers only at the periphery of the metropolis, the plight of the metropolitan underclass is surely not a peripheral issue. Research has shown that unequal access to public services leads to limited opportunities and poorer life outcomes for low-income individuals. How have lower expenditures for social services at the municipal level, combined with the declining support for redistribution programs at the state and federal governments as a consequence of multi-year budget crises, affected citizens’ access to basic social services? This is an important question in light of the 2008 Great Recession which is likely to have intensified demand for local public services especially in metropolitan areas.

This article is based on the paper, ‘Separate, Unequal, and Ignored? Interjurisdictional Competition and the Budgetary Choices of Poor and Aﬄuent Municipalities’ in Public Administration Review.

Benedict S. Jimenez – Northeastern University
Benedict S. Jimenez is Assistant Professor at Northeastern University in Boston. His research focuses on urban public finance and management. He is the recipient of the Donald C. Stone Junior Scholar Award from the American Society for Public Administration, and the Paul A. Volcker Junior Scholar Award from the American Political Science Association.