In recent decades many commentators have expressed increasing concern over the apparent decline of civil society in the U.S. Jaclyn Schede Piatak explores one possible way to address this decline, using public sector employees, who, she argues, are more likely to volunteer. She writes that non-profit employees are much more likely to volunteer both formally and informally than those in the for-profit sector, due to their ‘other-orientation’ from their work. With this in mind, public and non-profit workers may be a valuable resource towards beginning to rebuild social capital and civic engagement in the U.S.

Historically, the United States has been known for its strong civil society, dating back to the early 1800s when Alexis de Tocqueville visited America before writing Democracy in America.  However, social capital has been on the decline in recent decades with fewer people joining community groups, getting to know their neighbors, and even generally socializing.  This decline could have serious impacts on the health of democracy and voluntary organizations.

At the same time, the face of public service continues to evolve as people carrying out the government’s work can be found in all three sectors—government, nonprofit, and for-profit.  Unlike those in previous generations, younger individuals may see opportunities to engage in public service in nonprofit and for-profit organizations just as much as in government agencies.

Volunteers play a vital role in society; from parents volunteering to serve in a parent teacher association to individuals serving food to those in need to others providing medical care or firefighting services.  Despite the fundamental need for volunteers, in 2013 the volunteer rate in the United States was at its lowest point since the data was initially collected in 2002.  This is disconcerting since volunteering encourages good citizenship and builds social capital.

What does it mean to volunteer?

A majority of the research on volunteering focuses on formal volunteering – that is volunteering through or for a formal organization.  People choose to volunteer for numerous reasons ranging from altruistic to self-interested motives.  People volunteer out the goodness of their heart, or to help others in anticipation of needing help in the future, or to meet others in order to make friends.

Aside from motivations to volunteer, personal resources like education and work also influence people’s decision to volunteer.  These sorts of resources typically increase the chances that an individual will be asked to volunteer due to larger social networks; and being asked is the most popular way people become involved in volunteering in the first place.

So an individual decides to volunteer, but that could be just once for an hour or two out of the entire year.  Is there a difference?  Many different models of volunteering exist, including one-time, episodic volunteers that devote one day to painting a local school or volunteering at a soup kitchen on a holiday.  Interestingly, volunteer rates do not necessarily correspond to the amount of time volunteers devote to an organization.  For example, women are more likely to volunteer than men, but male volunteers tend to devote more time to volunteering than female volunteers.

Can public employees pave the way to rebuilding social capital through the act of volunteering? 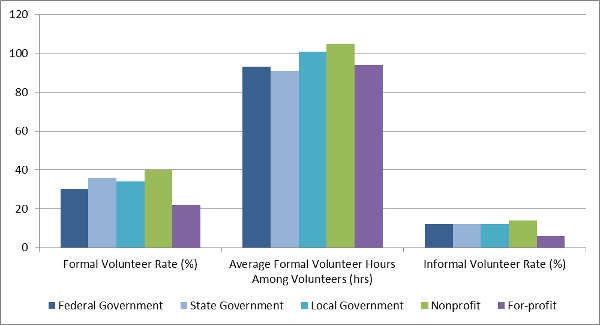 Lessons for public and nonprofit managers

Nonprofit sector employees appear to be even more other-oriented than a majority of public servants.  These findings have important implications for the recruitment and retention of public sector employees.  If an individual wants to help others through their work, how do they choose between the public and nonprofit sector?  In the bureaucratic environment of public sector work, how do you ensure these other-oriented employees feel like they are making a difference?

Important distinctions within the government sector across the federal, state, and local levels were found.  Local teachers almost certainly differ from federal bureaucrats at the Department of Education, and even in similar occupations, state compliance officers may be different from federal compliance officers due to the nature of their work.  Local government employees are more prone to volunteering than federal and state government employees.  These findings coalesce with research on public trust, where people tend to have the highest levels of trust in local government.

This is based on the article Altruism by Job Sector: Can Public Sector Employees Lead the Way in Rebuilding Social Capital? Journal of Public Administration Research and Theory, first published online April 2, 2014 doi:10.1093/jopart/muu013

Jaclyn Schede Piatak – University of North Carolina at Charlotte
Jaclyn Schede Piatak is an Assistant Professor in the Department of Political Science and Public Administration at the University of North Carolina at Charlotte.  Her research interests include public and nonprofit management, volunteering, philanthropy, and social policy.  Her work appears in the Journal of Public Administration Review and Theory and a co-authored book, Occupational Labor Shortages: Concepts, Causes, Consequences, and Cures. You can follow Jaclyn on Twitter @JaclynPiatak.