In the last two decades video games have grown into a multibillion dollar industry, with titles and franchises that rival the film industry in terms of revenues. Ricard Gil takes a close look at how producing a game in-house, rather than via a developer, can increase games’ consumer performance. He argues that this stems from such ‘integrated’ games being perceived as being higher quality, and being distributed more strategically.

News outlets remind us daily about how talent and firm boundaries are constantly changing in creative industries through a steady flow of mergers and acquisitions. These industries contrast with other (more traditional) sectors in that they function as networks and that distributors acquire rights from creators to distribute content on existing platforms. Since access to high quality content and network management is of utmost importance for success, the acquisition of talent guarantees control over assets (human capital in these industries) that produce in-house content and evaluate quality in arm’s length transactions.

Despite the fact that the study of the determinants of the boundaries of the firm has a long tradition in economics, the study of contracting for innovation presents new challenges for academics as well as policy makers and industry practitioners. The production function for innovation is unlikely to include tasks that are easy to specify increasing both the costs of managing and outsourcing innovation. Understanding the trade-offs involved in contracting for innovation becomes then very important from a managerial and policy perspectives as the economy increasingly relies on these sectors.

The U.S. video game industry is a particularly good setting to study vertical integration in emerging, creative industries. As of 2008, this industry experienced record sales of around $22 billion in the U.S. and more than $40 billion globally. As a result, competition intensified considerably between the three main platforms (Nintendo Wii, Sony’s PS3 and Microsoft’s XBOX360). A direct consequence of the rapid sales growth and competition in this industry has been that distributors of content (called publishers) have acquired an increasing amount of successful independent developers in the pursuit of controlling key creative talent and develop the next hit game. It is important to note that the video game market is considered to be a hit market because sales are very concentrated on only a few extremely successful products. For example, in December of 2007, half a billion dollars was spent on video games for the XBOX360. Out of these, more than $150 million was spent on only two games.

This strategy is not in disagreement with the numbers. Our evidence shows that internally produced games are associated with higher prices and higher sales than games outsourced to independent developers, even after adjusting by demand seasonality (month and year), game fatigue (time since release) and potential market size (platform customer base). If it is clear that internally produced games have higher demand, the question that we must ask is why this is the case. We find the answer when we turn to industry structure and quality assurance processes.

The genesis of a video game starts with the development of the game. Developers create video games while publishers possess distribution rights of the game and are responsible for the manufacturing, marketing, market research and advertising of the game. First-party developers are owned by a publisher whereas second-party developers are independent developers that exclusively work for a specific publisher. An independent developer contracts with a publisher receiving a combination of milestone payments and royalties. To make sure that milestones are followed and deadlines are met, publishers assign producers (project managers) that monitor, assist and coordinate actions with the developer. In a sense, meeting milestones help meeting deadlines and the timely release of a video game in the market. If the developer is external (second or third-party), coordination with the QA team (Quality Assurance) from the publisher is more costly than when the developer is internal. Because game testing is done on special test equipment that is provided to developers and publishers by platform companies, publishers that own platforms have lower costs of coordination with developers than publishers coordinating with external developers and external platforms. In a nutshell, most games are developed in three different types of firms that we show in Figure 1: solo developers (independent developers that need an external publisher), integrated developers (firms that publish and develop games), and console companies (these are firms that own a platform, publish and develop their own games). 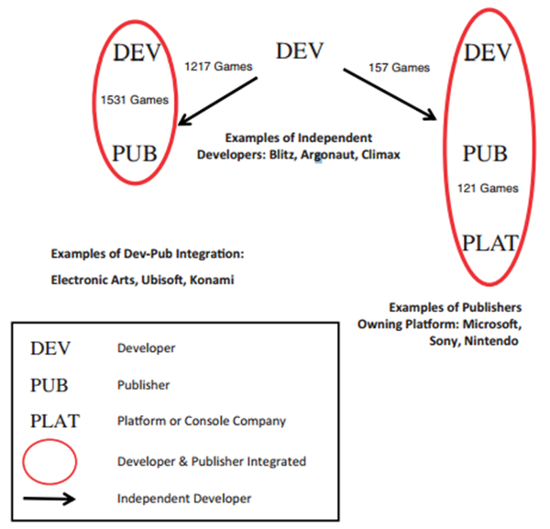 Taking into account the structure and processes in the industry, we hypothesize that integrated games outperform non-integrated games because of three distinct channels: (1) integrated games may be better than non-integrated games and consumers perceive them as of higher quality and therefore have higher demand appeal; (2) distributors of content may release their internally produced games in more profitable months; and (3) distributors of content invest more resources in promotional activities of their own video games than outsourced games. We test our hypotheses using data from NPD, the leading marketing data provider, on monthly video game sales in the U.S. between October 2000 and October 2007 (all video games and all platforms in both the 6th and 7th generation), and find evidence that suggests that most of the difference in performance is due to the first two channels: integrated games are inherently better and are released in strategically more profitable months. According to our findings, marketing strategies after release appear to have statistically negligible effects.

Although our findings provide a sensitive number of reasons behind the difference in performance between integrated and independent games, the popular press has suggested three additional explanations for the incidence of vertical integration and the wave of merger and acquisitions in creative industries that we are unable to explore in our paper. First, network effects in these industries raise the marginal benefit of producing internal content and therefore the willingness to pay for creative assets in companies that have access to potentially bigger networks. Second, internal production of content may be cheaper (lower transaction and adaptation costs) than outsourcing content development. Finally, a third alternative is that vertical integration and developer acquisition is how large companies in this industry are able to attract and retain high-skill talent that is able to evaluate outsourced content and produce future hits. A deeper understanding of the causes and consequences for the accumulation of assets and talent in these industries is needed as antitrust and economic policies may be able to hinder or foster technological innovation and diffusion, and consequently economic growth.

This article is based on the paper ‘Vertical Integration, Exclusivity, and Game Sales Performance in the US Video Game Industry’, in the Journal of Law, Economics, and Organization.

Ricard Gil – Johns Hopkins Care Business School
Ricard Gil is an Associate Professor of Economics and Strategy at The Johns Hopkins Carey Business School in Baltimore, MD. His research examines the reasons and consequences of vertical integration as well as the role of formal and informal contracting in a variety of industries such as the movie industry, the video game industry, public procurement and the dry-cleaning industry among others.