Government workers are able to gain better pay in attractive areas like California and Manhattan, especially if they are unionized.

Government workers are able to gain better pay in attractive areas like California and Manhattan, especially if they are unionized.

In recent years, many commentators have expressed growing concerns over levels of public sector pay.  While citizens who are unhappy with high pay levels in the public sector could move elsewhere, thus affecting the tax base, in some areas this out-migration is much less likely than others. Jan K. Brueckner and David Neumark write that ‘high amenity’ areas such as California, for its climate, or Manhattan, for its productive density, are more attractive to citizens, which reduces the likelihood that they will vote with their feet over public sector pay, thus leading to better paid government workers in those areas.

We consider whether mobility actually works in this way.  In particular, when residents of high-amenity states are willing to pay for those amenities, public-sector workers may have more leeway for rent extraction.  This suggests that, all else the same, public-sector wages should be higher in places with amenities that people value.  Our paper demonstrates the existence of this link in a theoretical model, and then tests for it empirically. 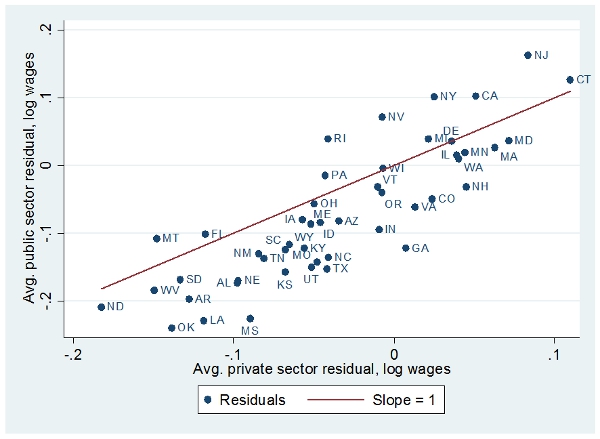 Initial suggestive evidence for this wage-amenity connection is shown in Figure 1, which plots state-level public-sector wage residuals (representing the wage component not explained by the usual controls) against state-level private-sector wage residuals.  The solid line has slope equal to one, so that points on the line represent a state in which the public-sector and private-sector wage premia for the state are equal.  While most of points are in fact below the line, note the identities of the states substantially above the line – states where the public-sector premium is larger than the private-sector premium and hence where public-sector workers are “overpaid.”  These states have warm weather (California), low rainfall (Nevada), a coastal location (e.g., New York, New Jersey, and Rhode Island), and large, dense urban areas (New York, New Jersey, and California).  Thus, Figure 1 suggests that rent extraction may be occurring in places where people like to live.

Megan Dean reviews The Politics of Weight: Feminist Dichotomies of Power in Dieting by Amelia Morris