Brazil: Reversal of Fortune is a valuable and highly relevant book which offers a thorough and holistic approach to several of the changes experienced by the country in the last few decades, writes César Jiménez-Martínez. Chapters cover democracy and the economy, welfare and class mobility, and Brazilian foreign policy. Recommended for economics and politics students looking for a clear introduction to the country. Due to steady economic growth, political stability, and an ongoing reduction of poverty and inequality, the 21st century has been, so far, a remarkable era in Brazil’s history. Accordingly, the country has received increasing attention from economists, politicians, journalists and academics, among others, in an attempt to examine issues such as the causes behind these achievements and their future sustainability. These accomplishments have been a matter of dispute. As these two oft-referred reports by The Economist illustrate, accounts have swung between huge optimism, particularly due to Brazil’s resilience during the last global financial crisis, to downright pessimism, because of a lower economic performance in recent years and a series of doubts regarding the quality of its democracy.

With Brazil in the spotlight again due to the upcoming World Cup and the still fresh memories of the protests of last June, Brazil: Reversal of Fortune is a timely and relevant addition to the literature. Its author is Alfred P. Montero, professor of Political Science at Carleton College, who has written extensively about Brazil, Latin America, and Spain.

In Brazil: Reversal of Fortune, Montero attempts to offer a more balanced, as well as more complex, perspective of the South American country’s ‘turnaround’, which, according to him, started with the stabilization of the Brazilian economy brought by the Plano Real in 1994. To that aim, Montero adopts quite a comprehensive approach to analyse the dimensions of governability, good policy, and quality of democracy; paying attention to issues such as economic performance, changes in political and judiciary institutions, foreign affairs and social policy. ‘One of the insights of this study’, he explains in the introduction, ‘is that the three dependent variables do not rely on the very same causes. What is good for policy governance may not work to help democratic quality. What is good for governability may limit more effective and innovative policy making as well as democratic quality’. As such, Montero avoids establishing linear relationships between these processes and observes how different dimensions and several institutions may interrelate and affect each other.

In my view, this approach proves fruitful, because it ends up offering a richer outlook on Brazil, unpacking some of the contradictions experienced by the country in recent years, which have not been properly addressed by the literature. According to Montero, while issues such as clientelism, patronage politics, and informal and temporary suspension of rules still characterise Brazil’s political landscape, they do not necessarily act in detriment of democratic and economic development. ‘Perhaps’, he assesses, ‘the most inconvenient fact for studies of democracy and good government in Brazil is the reality of improved performance in which many of the old ways of doing politics have remained firmly rooted’. 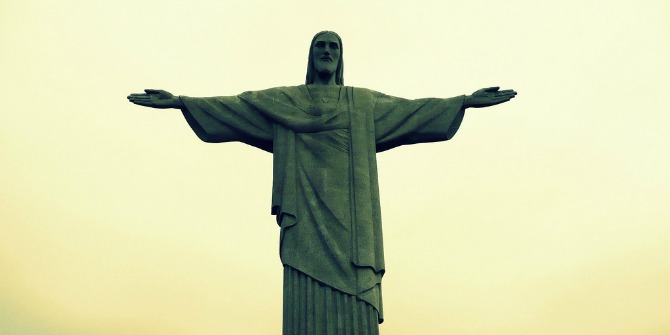 Chapter Three offers a good example of this more complex perspective. Here, Montero examines how governability has improved in Brazil despite the lack of deep changes in institutional design. In doing so, he criticises the pessimistic accounts given by some scholars, who have almost exclusively focussed on the relationship between presidency and congress. Conversely, according to Montero, broader issues such as the increasing ideological convergence among politicians or the weaknesses of programmatic political parties in Brazil may actually explain some developments in good governance and democratic quality during the last few decades.

Similarly, other interesting insights appear in Chapter Five, which examines how developmentalist policies have contributed to the recent good economic performance. Here, Montero convincingly argues that – unlike some pessimistic or neoliberal claims – Brazil never completely embraced neoliberalism nor adopted a model of what has been called ‘neodevelopmentalism’. Actually, in spite of the privatisation of several industries and the liberalisation of trade policy, statism did not disappear at all. In fact, it played a fundamental role in defining some market-oriented reforms that helped key industries to become more competitive in both the domestic and international markets.

While Brazil: Reversal of Fortune does not hide its optimism for the ‘turnaround’ of the country, it also addresses some challenges that remain. For instance, in spite of progress in social policy, the political class has not dealt with the structures causing inequality. In addition, Brazilians –particularly the ones belonging to a growing middle class- are still frustrated with the quality of democracy in their country, as the protests of June 2013, the largest social unrest experienced by Brazil in two decades, may have demonstrated.

Perhaps this latter point could have been more developed by the author. Although Montero explores the role of Brazilian civil society in terms of its participation in NGOs and civil society organisations, generally speaking, he says very little about political participation outside some of these institutions and organisations. While there are some references to last year’s demonstrations scattered through the text, in my view, it could have been interesting to know the author’s perspective regarding these events in more detail, in order to shed light, for instance, on how disruptive and extraordinary – or not – they were, to what degree they represent a challenge for Brazil’s political institutions, and which effects they may have on the political landscape and the quality of democracy in the country.

Still, Brazil: Reversal of Fortune is a valuable, highly relevant book, which offers a more thorough and holistic approach to several of the changes experienced by the country in the last few decades. As Montero reminds the readers, legendary composer Antonio Carlos Jobim used to remark that ‘Brazil is not for beginners’. Considering the complexity of Brazil’s ongoing transformation, he was probably right, but precisely because of that, this book could be a very good starting point for a better understanding of the South American giant.