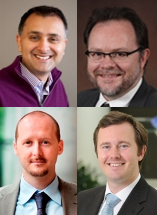 Areas such as Silicon Valley and Boston are often held up as examples of innovative regions to be emulated, but what makes them this way? By analysing patent data on computers and communication technology, Ajay K. Agrawal, Iain Cockburn, Alberto Galasso, and Alexander Oettl,  argue that the mix of large and small firms in a region is very important to regional innovation. He writes that regions where a number of small and large lists coexist are more productive in terms of innovation, when compared to those that have only a small number of large firms or a large number of small ones.

A striking feature of economic geography is the large variation in productivity across regions. Moretti (2011) documents that after adjusting for skill composition, average wages in the highest and lowest paying U.S. metropolitan areas diﬀer by approximately a factor of three. Such dispersion is also evident when one compares innovation outcomes across regions. Silicon Valley and Boston are popular examples of outlier regions, significantly more productive than others in terms of innovation.

In Figure 1, we illustrate such variation using US patent data on computers and communications technologies in 1995. Even Metropolitan Statistical Areas (MSAs) of similar size in terms of the number of local inventors often differ substantially in terms of their innovation productivity (number of citation-weighted patented inventions per inventor). For example, Rochester, New York and Portland, Oregon had a similar number of innovators working in the computer and communications industry in 1995, but Portland inventors generated almost double the number of citation-weighted patents. 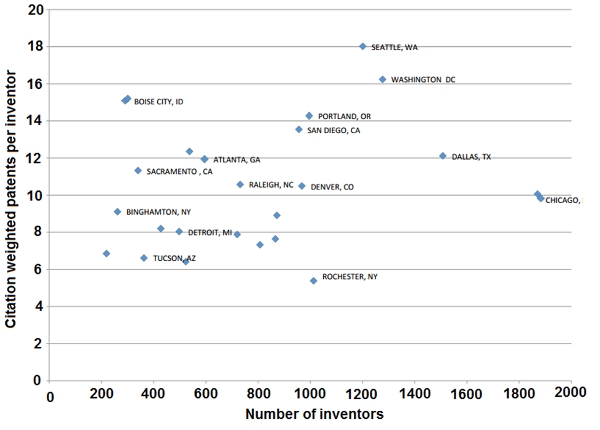 Regional productivity disparities have led to a variety of policies focused on enhancing local innovation. In cities like San Diego, California or St. Louis, Missouri such initiatives have mainly focused on encouraging entrepreneurship. Conversely cities like Flint, Michigan or Greenville, South Carolina have invested heavily in attracting large corporations.

In recent research, we study how local innovation is affected by the organization of R&D manpower. In other words, for a region with a given number of inventors, does the manner in which those inventors are organized (e.g., all in one large firm, spread out across many small firms, distributed across a mix of large and small firms) influence their productivity? We argue that innovation productivity is greater in “diverse” regions, i.e. those where large and small labs coexist.

Large and small labs can be beneficial to one another

The presence of large labs is beneficial because they have an advantage in idea production due to within-firm knowledge spillovers as well as spreading the fixed costs of research over more projects (Schumpeter, 1942). At the same time large labs only commercialize innovations that “fit” with their established research activities. For example, in 2001 only 5 out of more than 2,000 new product proposals by General Electric employees were accepted for product development.

Spin-outs (when a division of a company becomes a new business) may commercialize “misfit” inventions that are not consistent with the assets, capabilities, or strategy of the parent firm. We expect the cost of spin-out formation to be reduced when a large number of small labs are present in the region. Intuitively, the presence of many small labs generates a thick local market for ancillary services, and may also spur a culture of entrepreneurship that lowers the risk and cognitive cost for employees of large labs to leave their employer and start their own firm or join another entrepreneurial venture. The complementary externality effects of co-located large and small labs imply that innovation is maximized in regions which have a diversity of firm sizes.

We test the empirical validity of our theory using U.S. regional innovation data for 1975-2000. First, we report two case studies from 1995 that are consistent with our theory to illustrate our main point: 1) Portland, Oregon compared to Rochester, New York (lack of small firms), and 2) Atlanta, Georgia compared to Seattle, Washington (lack of a large firm).

We also find that in periods where at least one large lab and numerous small labs co-exist, regions experience a 17 percent increase in innovation. Furthermore, consistent with the proposed mechanism, we find that diversity is associated with a 28 percent increase in the probability of spin-out formation. Moreover, we present additional analyses indicating that the data are consistent with our causal interpretation but not the main competing hypotheses.

Our findings suggest important policy implications. Regional productivity disparities have led to a variety of policies focused on enhancing local innovation. Such initiatives often focus on either promoting entrepreneurship or attracting large corporate labs. Our results indicate that policies focused exclusively on attracting “anchor tenants” or cultivating new ventures may not be as effective as promoting firm size diversity, leading to an appropriate mix of large and small firms. In other words, our results suggest that there is no universal “best” policy, but rather the optimal policy depends on the organizational structure of R&D labor in a region at a given point in time. In simplistic terms, a region with large firms but few young entrepreneurial firms may benefit more from policies designed to cultivate new ventures rather than to attract more large firms, whereas regions without local large firms may benefit most from attracting those.

This article is based on the paper “Why are some regions more innovative than others? The role of small firms in the presence of large labs” in the Journal of Urban Economics.

Iain M. Cockburn – Boston University
Iain M. Cockburn is the Richard C. Shipley Professor of Management at the Strategy and Innovation Department in the School of Management at Boston University. His research interests include the economics of innovation, intellectual property, productivity measurement, industrial organization, and applied econometrics.

Alexander Oettl – Georgia Institute of Technology
Alexander Oettl is an Assistant Professor in the Scheller College of Business at the Georgia Institute of Technology. His research interests include the economics of innovation, knowledge spillovers, labor mobility, and economic geography.  His current work focuses on the production and diffusion of ideas at the individual, firm, and regional level.