With more explicit forms of racism having declined in recent decades, the implicit racial attitudes of how people feel about policies designed to help minorities, or ‘symbolic racism’, has begun to gain attention. But how do these forms of more implicit racism affect how minority political candidates are evaluated by voters? Using national election surveys carried out in 2012, David Redlawsk, Caroline Tolbert and Natasha Altema McNeely find that both positive and negative emotional responses to candidates running for office can help to condition the influence of underlying levels of racial resentment in shaping how voters evaluate them. More negative emotions, such as fear, make levels of symbolic racism worse, while more positive ones, such as hope, can help to overcome the effects of such racism.

We tend to think (or maybe simply hope) that people evaluate political candidates based things like on their impressions of the economy, where they stand on issues, their partisan preferences, and even factors like incumbency. But when it comes to non-white candidates, racial attitudes also come into play. There is a great deal of research on race and politics in the United States, with much of it focused on how implicit racial attitudes influence assessments of policies that are perceived to benefit minorities, such as affirmative action or welfare policies.

A leading theory is “symbolic racism” initially described by David Sears and Donald Kinder, and developed over the years by Sears and many colleagues. Symbolic racism has, perhaps, replaced “old-fashioned” explicit racism in conditioning how people feel about policies designed to help minorities, and in responding to non-white candidates. With old-fashioned racism, non-white individuals are generally deemed less qualified; symbolic racism instead focuses on the belief that members of minority groups should get ahead on their own, without “special privileges” or government programs.

It wasn’t very long ago that commentators were hailing the advent of the post-racial American where a black (actually mixed-race) man could be elected President of the United States. Six years in, the evidence is pretty clear that the election of Barack Obama failed to usher in these post-racial America (See the book by Michael Tesler and David Sears, Obama’s Race: The 2008 Election and the Dream of a Post-Racial America), although his re-election in 2012 might suggest race is not quite the political barrier it once was, as Obama overcame all manner of vicious attacks questioning every aspect of his Americanism to win by a convincing margin. Still, there is plenty more we need to understand about how racial attitudes influence the evaluation of minority political candidates.

Over the last couple years we have been looking at the question of how implicit racial attitudes – that is, attitudes that are not directly expressed – influence candidate evaluation, with a specific focus on Barack Obama. In a 2010 paper in Political Research Quarterly (“Voters, Emotions and Race in 2008: Obama as the First Black President”) we examined with Bill Franko how positive emotions may override implicit concerns about Obama as a black president, leading to great support for him. In new research, we argue that the effects of symbolic racism as currently understood misses an important element – emotion – which may condition how strongly implicit racial attitudes influence evaluations of black candidates like Obama. The literature recognizes that racial attitudes have affective underpinnings, but the direct role of emotion has not been explored in depth. Emotional responses to politics and politicians provide independent bases of candidate evaluation, and when combined with the effects of symbolic racism better explain the evaluation of African American candidates in a process we call “emotive racism.”

Emotion can work in both positive and negative ways. Feelings of hope, pride and enthusiasm may reduce the effects of negative racial attitudes, while feelings of fear, anxiety and anger may increase them. A recent study by Antoine Banks and Nick Valentino takes a first step at explicitly examining the emotional antecedents of symbolic racism (as well as old-fashioned racism and race-neutral values.) They find that anger appears to be the motivating negative emotion in symbolic racism, rather than disgust. But Banks and Valentino do not address the role of emotion in the other direction, that is, how symbolic racism and emotional responses to candidates combine to influence candidate evaluation when an African American candidate is on the ballot. That is our task.

Emotional responses to candidates in a given election come after the development of racial attitudes, that is, racial attitudes generally exist prior to a specific campaign. Campaigns in which minority candidates participate should activate those pre-existing racial attitudes. But they should also activate more proximate emotional responses – both positive and negative – to the candidates running for office, since campaigns are quite focused on the emotions of voters. Models of minority candidate evaluation that include symbolic racism measures, but fail to account for the emotions that candidates generate, are likely underspecified, and may overstate the direct role of symbolic racism.

Using two national election surveys conducted in 2012 with unique questions placed on the survey measuring emotional response to both the black presidential candidate (Obama) and the white candidate (Mitt Romney), our findings show that emotions generated by candidate campaigns have distinct and important implications for shaping evaluations of both minority and white candidates when they are competing for the same office. We find that negative emotions, especially fear, appear to exacerbate levels of symbolic racism, while positive emotions, especially hope, can overcome both racial resentment and negative emotions. Finally, emotions triggered during the presidential campaign are more salient in shaping evaluations of African American candidates than white candidates in competition with each other, but they have some influence on both. These patterns are repeated whether the outcome variable is candidate evaluations, feeling thermometer scores or trait assessments regarding the candidates’ knowledge and or empathy towards others. Moreover, the key findings are also confirmed when we look at 2008 instead of 2012.

Racial attitudes toward African American candidates are partially explained by symbolic racism, which has replaced overt racism in most American’s reported responses to such candidates. However, as typically operationalized, symbolic racism as applied to candidate assessments fails to account for the emotions generated by a political campaign. Symbolic racism’s effects are moderated when emotional responses to Barack Obama are included in a candidate evaluation model, while emotions remain an important predictor. So while the extensive research into symbolic racism that has greatly increased our understanding of how racial attitudes influence political beliefs has borne a great deal of fruit, our research strongly suggests that racial attitudes – whether measured as implicit attitudes or as direct responses to racially-tinged policy and beliefs about the place of minority groups in society – are not the full story when we think about candidate evaluation in this context.

At its core politics is about emotion, and emotions powerfully influence how voters perceive candidates, even to the point of potentially overriding other such otherwise stable attitudes like symbolic racism. While not surprisingly, high levels of both symbolic racism and negative emotions lower evaluations of Barack Obama during the 2012 (and 2008) campaign, the ability of Obama’s campaign to generate positive emotions even among some who were high in symbolic racism played an important role in conditioning evaluations of him as he contended against both John McCain and Mitt Romney. Inclusion of both symbolic racism and emotion is necessary to understand perceptions of Obama as a black presidential candidate, and, we suspect, of other minority candidates as well.

This article is based on the paper Symbolic Racism and Emotional Responses to the 2012 Presidential Candidates in Political Research Quarterly.

Caroline Tolbert – University of Iowa
Caroline Tolbert is Professor of Political Science at the University of Iowa. She is the author/coauthor of eight books, and numerous scholarly articles. Her research explores voting, elections, public opinion and race and representation broadly defined. She has written three books on digital inequality, including Digital Cities: The Internet and the Geography of Opportunity (2012), Digital Citizenship (2008) and Virtual Inequality: Beyond the Digital Divide (2003). Tolbert is co-editor with Rodney Hero of “Race and the 2012 Elections: A Post-Racial Society, More Apparent Than Real Mini Symposium” in PRQ in July 2014.

Posted In: Caroline Tolbert | David Redlawsk | Elections and party politics across the US | Natasha Altema McNeely 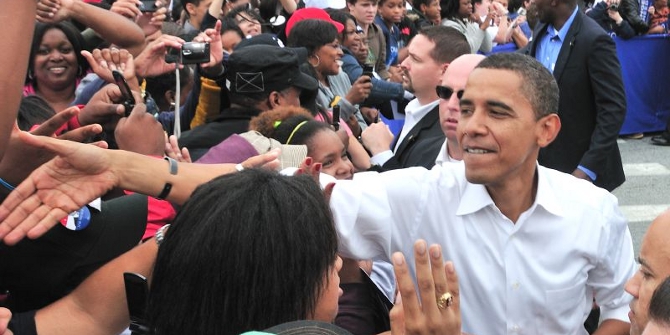