Much of the conservativeness of the American ‘South’ stems from the ‘Deep South’ of states such as Alabama and Mississippi.

Much of the conservativeness of the American ‘South’ stems from the ‘Deep South’ of states such as Alabama and Mississippi.

Is the South still different? In 2008 and 2012 Barack Obama succeeded where John Kerry and Al Gore had failed by winning in Virginia and Florida, indicating for many that the peripheral states of the South are now up for grabs. Steven White takes a close look at why and how conservatism differs across the South, and finds that while southern white distinctiveness persists in the aggregate, this is driven by attitudes in the Deep South states. He argues that the concentration of white born again Christians is a major factor in the region’s social conservatism.

In 2000 and 2004, the Democratic candidate for president didn’t receive a single Electoral College vote from the South. This led many analysts to suggest the party “whistle past Dixie” and turn its attention to opportunities elsewhere in the country. However, in 2008 Barack Obama actually won three states from the peripheral part of the region: Virginia, Florida, and North Carolina. In 2012, he won Virginia and Florida again and only lost North Carolina by 2 percentage points. Southern Electoral College votes – at least in the peripheral states – suddenly seem more up for grabs.

These electoral outcomes highlight the real world implications of several academic debates: Is the white South still different? Are the deep and peripheral parts of the region still distinguishable? And what role does the region’s propensity for a certain type of Christianity play in all of this?

Historically, the South has been a unique region in American politics in several ways. During the era of Jim Crow, the “solid South” was the most reliable part of the Democratic Party’s coalition, trading electoral support of the national party for protection of the region’s white supremacist racial structure. However, in the aftermath of the civil rights realignment – when the Republican, rather than Democratic, party became the party of racially conservative white voters – the South has become increasingly Republican in its presidential voting behavior. This is especially true in the Deep South states, where white presidential voting behavior is nearly becoming a mirror image of black voting behavior.

The South is also unique in its deep concentration of white Evangelical or “born-again” Christians. These Christians believe eternal salvation requires a born-again conversion experience. Historically at odds with political engagement, they were brought into the political mainstream beginning with the successful 1976 presidential candidacy of southern born-again Christian Jimmy Carter. However, it was the Republican Ronald Reagan who cemented their place in the GOP’s political coalition.

Figure 1 plots the percentage of the white population that identifies as a born-again Christian in each of the 48 continental states, as well as the District of Columbia. There is substantial variation, with only 12 percent of whites in Connecticut identifying as born-again but 78 percent of whites in Mississippi doing so. There is also clear regional clustering. With the exception of heavily Mormon Utah, the least born-again states are in the Northeast, and the most born-again states are in the South and its border states. Randomly select a white person in New England, and it’s very unlikely you’ll pick a born-again Christian. However, if you randomly select a white person in the Deep South, it’s very unlikely you won’t pick one. 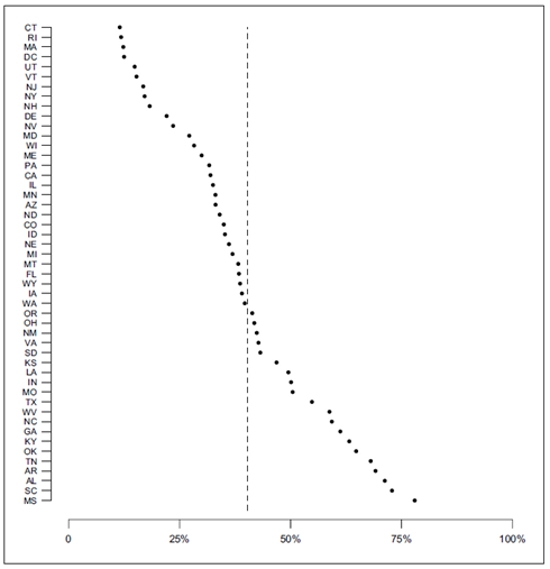 Note. The dotted line represents the national average of 40 percent

In recent research, I analyze three questions: Are southern white attitudes still distinctive in the 21st century? Do major differences still exist between the Deep and Peripheral South states? And finally, how much does the greater concentration of white born-again Christians in the region drive this distinctiveness? I find clear evidence that southern white distinctiveness persists in the aggregate. White southerners overall were more likely to vote for the Republican presidential candidates in 2004 and 2008, more opposed to gay marriage and abortion rights, more supportive of the war in Iraq, and more negative in their assessments of Muslims and gay rights organizations.

However, I also find that this is driven far more by the Deep South states than the Peripheral South ones. I follow the lead of V. O. Key, Jr., as well as other southern politics scholars in this tradition like Earl and Merle Black, in defining the Deep South states as Alabama, Georgia, Louisiana, Mississippi, and South Carolina. I define the Peripheral South (what Key called the “Rim South”) states as Arkansas, Florida, North Carolina, Tennessee, Texas, and Virginia. Consider vote choice in the 2008 election: Controlling for ideology, partisanship, gender, age, income, and education, white southerners overall were still 14 percentage points more likely to vote for McCain over Obama than whites elsewhere in the country. However, this can be broken down into a 25 percentage point increase in the Deep South, compared to only a 9 percentage point increase in the Peripheral South. A similar pattern shows up for opposition to gay marriage, opposition to abortion, attitudes toward gay organizations, attitudes toward Muslims, and support for the Iraq war. The aggregate white South is more conservative than whites in the rest of the nation, but Deep South whites especially so.

Regarding the confounding of region and religion, I find the South’s greater concentration of white born-again Christians plays a substantial role in the region’s social conservatism, but not as much of a role in views towards economic and foreign policy issues. However, whether it impacts the regional differences or not, it is clear that born-again Christianity in itself has a major impact on white public opinion nationally. In every issue analyzed born-again Christians had different views than those who were not born-again. This is not surprising for “culture wars” issues like gay marriage and abortion, but is perhaps more surprising for issues like opposition to free trade and support for the war in Iraq.

Overall, the white South is still different, but heterogeneously so. The “southern” difference is often a weighted average of a very distinctive Deep South and a much less distinctive Peripheral South. Looking only at “the South” in the aggregate, in other words, blends the deeply southern residents of Mississippi and Alabama with the perhaps southern-in-name-only residents of northern Virginia suburbs and Florida retirement communities. As these parts of the South becoming increasingly differentiated – perhaps best exemplified by Peripheral South Virginia’s role as a swing state in 2012, while Deep South Mississippi whites gave 89 percent of their votes to Mitt Romney – such subregional breakdowns will become increasingly important to keep in mind.

This article is based on the paper The Heterogeneity of Southern White Distinctiveness in American Politics Research.

Steven White – Columbia University
Steven White is a Ph.D. candidate in the Department of Political Science and a 2013-2014 Mellon Interdisciplinary Graduate Fellow at Columbia University. For the 2014-2015 academic year, he will be a post-doctoral research associate at the Taubman Center for Public Policy & American Institutions at Brown University.

June 11th, 2014|Democracy and culture, Elections and party politics across the US, Steven White|0 Comments
Previous post Next post