What you choose to eat is more than a personal preference; food choices are influenced by socioeconomic factors such as household income and cooking skills as well as environmental factors such as accessibility to food retailers. Using Twitter data, Xiang Chen takes stock of personal food choices and their correlation to the environment of available food. He finds that nearby grocery stores have marked effects on promoting healthy eating, while the influence of fast food restaurants is less evident. This is the first time Twitter has assisted in dietary research that seeks to improve food security.

The food industry in the US has stepped into an era where processed, packaged, and energy-dense food prevails: microwavable entrées are stocked in the freezer of corner stores, burgers and fries are on the menu of almost every restaurant, and desserts are saturated with excessive sugar or artificial sweeteners. The influences brought forth by lack of a food culture and promoting food in large portions have further put Americans into an ‘obesogenic’ food dilemma, where they are surrounded by an environment that encourages them to eat unhealthily. Aside from cultural and behavioral explanation such as unawareness about proper nutrition and a lack of regular exercise, an important contributor to the perceived increase in the obesity rate is the absence of a supportive food environment that allows people to make healthful food choices. We investigated this connection in order to identify if food choices are influenced by people’s immediate food environment.

A key way of investigating this connection is through Twitter. Twitter messages, or tweets, often contain users’ preference for certain types of food.  Food-themed tweets can be broadly categorized as “healthful” and “unhealthful” depending on their content. For example, expressing a desire to shop for groceries for dinner is considered to be healthful, while craving a BLT sandwich from McDonald’s is relatively unhealthful. Using this dichotomy and focusing on the case of Columbus, Ohio, raw tweets disclosed as publically available were streamed directly from Twitter. The geographical locations of these tweets were then pinpointed on the map using a coordinate-matching process called geocoding in the Geographic Information System (GIS), as shown in Figure 1a. Two different types of food retailers, “green retailers”suchas grocery stores carrying fresh fruits and vegetables, and chain fast food restaurants were also geocoded in the local region, as shown in Figure 1b. Spatial analysis between these two datasets revealed if people’s food attitudes to food were influenced by their exposure to nearby food retailers.

Figure 1 – (a) Selected tweets and (b) food retailers in Columbus, Ohio

Note: N is the number of tweets.

Examining this problem in terms of the percentage of healthful vs. unhealthful tweets gives rise to more striking findings. Figure 2a shows there is no apparent pattern as to how the prevalence of fast food restaurants shapes individuals’ eating habits. However, the result indicates that even with low access to fast food restaurants (fewer than 5), greater than 85 percent of individuals still tended to acquire fast food, which suggests that preference for fast food is not restricted by spatial barriers but may be stimulated by other non-spatial determinants such as taste and cost. In contrast, Figure 2b shows that the increase of green retailers in vicinity of individuals has a direct influence on dietary behaviors. When there were less than three green retailers in a 0.5-mile buffer of tweets, there were generally a higher percentage of individuals eating fast-food. When there were three green retailers, the percentage of healthful eaters (52.6 percent) outnumbered that of unhealthful eaters (47.4 percent). 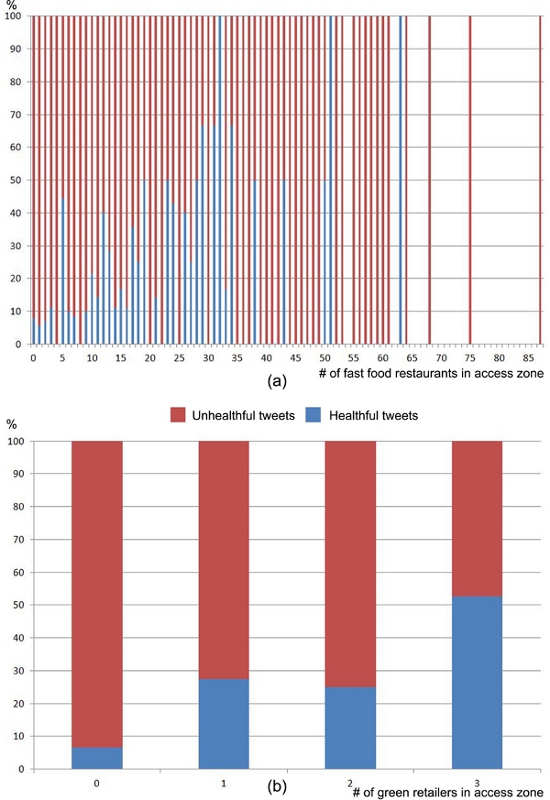 Understanding this correlation is necessary for proposing food initiatives that aid in food safety and mitigate the risk of obesity in communities. Supermarkets that stock fresh produce have played a more far-reaching role than fast food restaurants in improving the eating habits of local residents. Therefore, instead of discouraging consumption of fast food, food policy making should be oriented towards improving the foodscape experienced by individuals, such as improving accessibility to supermarkets and offering more healthful diet options that meet nutritional recommendations.

Another dimension of the contribution of this study is the idea of crowdsourcing food-themed data from Twitter. In recent years, Twitter has been employed as an alert system for public health surveillanceand emergency response. This study is the first to engage Twitter in semantic analysis of food. Tweets are given voluntarily by users and this self-reported mechanism overcomes the privacy concerns of data collection. More importantly, tweets cover a large spatial extent and are available for any recent time period.  This availability in space and accuracy in time have immeasurable potential for soliciting data on the individual level.

This article is based on the paper Does food environment influence food choices? A geographical analysis through “tweets”,in Applied Geography.

Xiang Chen – Arkansas Tech University
Xiang Chen is a newly appointed Assistant Professor in Emergency Management at Arkansas Tech University. His research interest is urban food access and socioeconomic correlates by employing innovative geospatial techniques, such as geovisualization, social media, and space-time modeling. His other research interest is emergency preparedness for natural disasters and terrorist attacks by assessing vulnerability of urban transport infrastructure and by deriving optimal placement of shelters.