In theory, state supreme court justices should be independent in their decision making, rather than representative of voters’ interests as is the case for legislators. But can state supreme court justices’ decisions on certain major issues, such as the death penalty, be influenced by whether or not they are concerned about reelection? Using data from more than 8,000 death penalty cases in the late 1990s, Melinda Gann Hall finds that electorally insecure justices are more likely to make popular decisions on the issue of the death penalty when reelection is a concern, but in their final terms these justices are more likely to cast unpopular votes even under the most threatening circumstances.

Understanding linkages between citizens and government, particularly the connections brought about by the powerful force of elections, is fundamental to a science of politics. Central to this enterprise are institutional arrangements and other contexts that influence how voters are represented and shape the impact of electoral politics in democracy.

Beginning with classic studies of Congress through to recent work on state legislatures, political scientists studying United States politics have established that the threat of electoral reprisal induces public officials who wish to retain their seats to take the preferences of their constituencies into account when casting votes on controversial issues. However, certain circumstances sever this connection, including lame-duck status derived from voluntary retirement, electoral defeat, progressive ambition, and term limits. Essentially, terminal terms produce a shift in elite behavior wherein members vote sincerely in accordance with their own preferences rather than strategically to appease constituencies.

In recent research, I looked at how state supreme courts in the United States represent voters’ preferences. Specifically, I assessed whether justices in their terminal terms because of mandatory retirement laws have a greater tendency than their counterparts to cast unpopular votes. In doing so, I evaluated an important mechanism that serves to translate public preferences into judicial votes: conditions of electoral insecurity that raise the threat of electoral censure.

The primary data source for this inquiry is the State Supreme Court Data Project, which contains over 8,000 individual death penalty votes cast in state supreme courts from 1995 through 1998. The death penalty is appropriate for investigating constituency effects because public opinion in every state was strongly supportive of capital punishment in the 1990s, providing an unambiguous cue to decision makers.

Fundamentally, the analysis shows that when reelection is a goal, the effects of electoral insecurity are observable, producing strategic decisions about death sentences that better comport with constituency preferences favoring capital punishment. However, terminal terms, which remove the electoral incentive, sharply attenuate these effects. In short, representation in state supreme courts occurs in the form of strategic responsiveness quite similar to representation in legislatures. In this regard, the states’ highest courts are intriguingly enigmatic. Unlike the other political branches, state supreme courts lack an explicit representative function and are steeped in normative expectations of independence and counter-majoritarianism. Courts also are bound by law and are limited in their ability to decide without legal constraint.

In fact, elected state supreme courts in some regards may be the quintessential democratic institutions. State supreme courts are closely connected to state electorates by competitive elections and by federalism that leaves criminal law largely to the states. Moreover, on the issue of the death penalty, justices lack agenda control that would allow them to sidestep this controversial topic. In the American states, death penalty cases proceed automatically on appeal from trial courts to state supreme courts, and the justices must review these cases knowing that their choices may become the next hot-button issues in their reelection campaigns. Indeed, intense electoral competition, combined with the inability to avoid position-taking in politically salient cases, may constitute some of the most favorable conditions for constituency effects and their subsequent diminution when electoral goals and the impact of electoral politics are altered by terminal terms.

To place in stark relief these intriguing results, I modelled the predicted probabilities of liberal votes for various combinations of variables. Figure 1 displays these results, showing the predicted probabilities of liberal justices chosen in nonpartisan elections in conservative states to reverse death sentences under various conditions of electoral threat. Specifically, the comparison groups are justices under the age of 60, justices who are 60 years of age or older and eligible for additional service, and justices who are 60 years of age and older but in terminal terms. The age categories reflect the fact that the average age of the justices in the dataset is 59 and justices starting at the age of 60 are lame ducks. 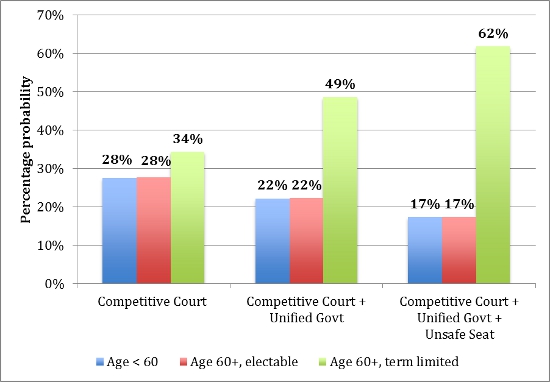 The effects of removing the electoral incentive are pronounced. Under only one condition of vulnerability (competitive supreme courts), the predicted probability of justices who are less than 60 years old casting a liberal vote is 28 percent. For justices who are 60 or over but not term-limited, the probability also is 28 percent. For the term-limited, the probability is 34 percent. However, when unified governments (the state legislature and statehouse are controlled by the same party) are added to the mix, predicted probabilities decline for justices eligible for continued service but increase for justices in terminal terms. When all three conditions of electoral threat are present, the differences in predicted vote are striking. In this scenario, justices who are not term limited have about a 17 percent probability of casting a liberal vote while justices in their terminal terms have a probability of 62 percent (i.e., these justices are predicted to reverse death sentences). Liberal justices in conservative states can face extraordinary electoral pressure to cast conservative votes but mandatory retirement attenuates these effects.

My latest research provides intriguing new evidence that mandatory retirement provisions fundamentally reshape the representative function in state supreme courts. Statistically speaking, mandatory retirement conditions the impact of the electoral environment, changing the ways in which external pressures influence judicial choice. Substantively, electorally insecure justices are more likely to make popular decisions on the issue of the death penalty when reelection is a concern, but in terminal terms these justices are more likely to cast unpopular votes even under the most threatening circumstances.

This research provides the most direct systematic evidence to date about the nature of the electoral connection in state supreme courts, or the question how various aspects of electoral politics influence judicial votes. These results support the contention that electoral vulnerability is key to the representative function in state supreme courts. While all justices in elected courts may have some incentive to adopt a representational posture, popular decisions are a complex function of individuals with reelection goals responding strategically to pressures generated by their own electoral circumstances. At least on the highly salient issue of the death penalty, both institutional and personal incentives drive popular decisions.

The fact that democratic pressures penetrate courts can be construed by many as an affront to the rule of law and fundamental due process. Observers reasonably might argue that appellate review should never be influenced by voter preferences or the personal desire to retain office, especially in capital cases where judicial votes represent life or death choices. Remarkably, the opposite view also is plausible. In cases lacking reversible error, electoral pressures may prevent justices from disregarding the law and imposing their own preferences that contradict the proper findings of juries and trial judges. In fact, the death penalty is law, and judicial independence has never been defined as judges voting as they wish. Thus, caution is essential when drawing normative conclusions from these findings, especially since we cannot ascertain what the objectively correct decisions are from the statistical analysis.

This article is based on the paper “Representation in State Supreme Courts: Evidence from the Terminal Term” in Political Research Quarterly.

Melinda Gann Hall – Michigan State University
Melinda Gann Hall is Professor of Political Science at Michigan State University. Professor Hall is a nationally recognized authority on judicial politics and state politics, with particular interests in judicial behavior and judicial elections. Professor Hall is a leading proponent of, and contributor to, infrastructure development in the study of state courts