In recent months, much has been made of San Francisco’s affordable housing crisis, with many commentators blaming the increased demand for housing on the influx of affluent workers drawn to the Bay Area’s creative and tech industries. Using a dataset of more than 7,300 land parcels, Nils Kok and Paavo Monkkonen find that San Francisco’s real problem is its poor supply of affordable housing. They argue that the city’s relatively low rate of affordable house building can be attributed to regulatory barriers in the form of extensive project approvals and project reviews, which are fuelled by the power of local stakeholder organizations.

It is common knowledge that the San Francisco Bay Area has an affordable housing crisis. Less well-known is the fact that the popular view of this housing crisis is focused on the wrong root cause of the crisis. Many people think that the Bay Area housing market is booming as developers rush to meet the increased demand of an economically vibrant area led by a phalanx of well-paid tech workers. According to this view, the housing market in the Bay Area is strong relative to other parts of the United States, and the only problem is that affluent newcomers are only incentivizing high-end housing construction as well as bidding up the prices of the existing housing stock, thus pricing lower and middle income people out of the market.

Yet compare development rates in the Bay Area to places like Houston or Atlanta and you find that despite offering a superior job market and better weather, the Bay Area lags far behind both metropolitan areas in producing new housing. That is because there is another side to this equation: the land use regulations that significantly constrain the supply of new housing in the San Francisco Bay Area.

Housing regulation tends to get short-thrift in the media due to its decidedly technical nature – it’s much easier for local newspapers and blogs to write about the cultural clashes involving the Google buses than it is to delve into why it is that San Francisco’s planning department reviews four times as many projects a year as New York City despite a population 1/10 the size. Bay Area cities have some of the most onerous permitting processes in the country. In San Francisco it takes a project an average of four years to be completed after it is first filed, and this added regulation leads to both less housing being built and higher prices for existing housing.

Why does San Francisco have so much regulation? A large reason is that The San Francisco Bay Area has some of the most active Not in My Back Yard (NIMBY) organizations in the country, and perhaps the most powerful way for local stakeholders to preserve the existing character of their cities manifests itself is in local land use regulation. The more project approvals, public hearings, and applications that a housing development must undergo the higher projects cost to complete. These added costs get priced into developments that do get built, reduce the number of units that developments contain, and limit the number of projects that would get built otherwise. 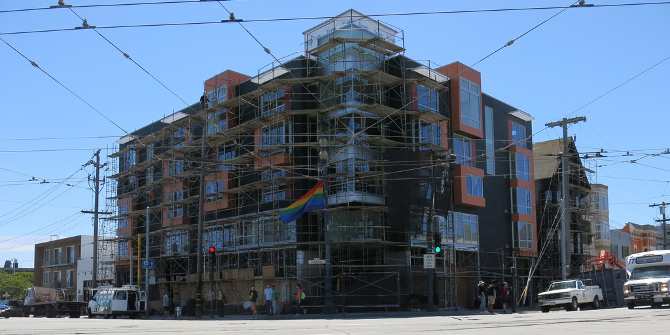 Our recent research confirms the relationship between regulations and housing prices within the Bay Area; that Bay Area cities that require a greater number of independent reviews to obtain a building permit or zoning change have higher land prices. We also find that local land use regulations in the Bay Area are closely linked to the value of houses sold.

Our intra-metropolitan research is based on a new source of data on land prices that distinguish land prices from housing prices. City and county assessors record the sales prices of parcels of vacant land and “teardown” parcels, and we use this data to examine how land use regulations shape land and housing prices within the San Francisco Bay Area. Where previous research has been limited in the size of its data pool, we were able to match our dataset of 7,358 sales of land parcels to the attributes of local regulation, especially the number of reviews required for standard projects and those requiring zoning changes.

Some of the findings confirm the existing understanding of property markets developed. For example, intra-urban variations along topographic, economic, and demographic dimensions are strongly associated with land prices. This is especially true in the San Francisco Bay Area, where we found the distance to an earthquake fault line correlates with land prices.

Yet the most important findings are those related to land use regulations. The variation in the restrictiveness of the legal and regulatory environment across cities strongly correlates with the value of land, even after controlling for a suite of demographic and other characteristics of the local environment. Our first central finding is that if the number of independent reviews required for approval of a general construction project were increased by one standard deviation in each of the political jurisdictions in the Bay Area, it is estimated that average land prices in the region would further increase by eight percent. We also find that if the number of separate reviews by municipal authorities required to approve a zoning change were increased by one standard deviation, the average land price would further increase by about four percent.

Because the power to regulate land is wielded by city and county governments in the U.S., there is significant intra-metropolitan variation in the stringency of regulation. This within metro variation has received limited attention because housing markets operate at the metro level generally, but our research provides strong evidence of the influence that land use regulations exert on house values in the San Francisco Bay Area. In part this is because local land-use regulation is so pervasive, yet it is also because land values represent such a large fraction of house values in the San Francisco Bay Area.

Our research makes clear that regulatory barriers in the form of extensive project approvals and project reviews play a critical role in the San Francisco Bay Area’s housing crisis. A first step towards reforming this excessive regulation is to acknowledge the role that regulation plays in constraining supply instead of focusing so much attention on how the existing supply of housing is apportioned.

This article is based on the paper ‘Land use regulations and the value of land and housing: An intra-metropolitan analysis’ in the Journal of Urban Economics.

Nils Kok – Maastricht University
Nils Kok is an associate professor in Finance and Real Estate at Maastricht University, the Netherlands.  His current research focus is on energy efficiency and “sustainability” in the real estate sector, concentrating on the microeconomics of energy efficiency in buildings – residential as well as commercial. His broader research interest ranges from urban economics to real estate investments, including topics such as land prices and regulation, transparency of global property markets, international property investments, and demographics.

Paavo Monkkonen – UCLA
Paavo Monkkonen is an Assistant Professor in the Department of Urban Planning at the UCLA Luskin School of Public Affairs, where he teaches courses on housing markets and policy, applied microeconomics, research methods, and global urban segregation. His research focuses on five areas: housing policy with an emphasis on low-income housing, the role of finance, policy, and economic development in the changing spatial structures of cities, land use regulations and their impacts on housing markets, the regularization of informally developed neighborhoods, and property taxation, and is international in scope, having covered Argentina, Brazil, China, Hong Kong, India, Indonesia, Mexico, and the United States.