In the modern U.S., most state civil service bureaucracies are organized to be professional and independent of political influence. But have these civil service reforms, such as merit based apolitical recruitment, affected the behavior of elected politicians? In a study of states that have adopted these merit systems throughout the 20th century, Gergely Ujhelyi finds that these changes have led to the decentralization of state government spending towards local governments. He argues that as politicians lost their ability to influence policy implementation, they began to redistribute public funding towards friendly local governments. With the current trend towards a less politically insulated and more flexible civil service, state politicians may now have an incentive to centralize spending at the state level once again.

Motivated in part by tighter budgets, in recent years a number of states have made major institutional changes in how they organize public employment. Some of these, like the elimination of collective bargaining in Wisconsin, have received considerable public attention. Other large-scale changes, like the 2012 elimination of civil service protections in Arizona, have gone mostly unnoticed. Evidence from civil service reforms in the last century suggests that these changes could lead to the centralization of government spending at the state level, away from local governments.

The most basic trade-off in organizing a government workforce is between insulation (protecting employees from undue political influence) and flexibility (making sure that employees can be motivated). Some insulation is believed to be necessary to let public employees operate independently of the changing winds of politics, but we also want bureaucrats who can be motivated to work hard and be responsive to the public – and that requires flexibility (e.g., the possibility of firing people).

Most of those who have thought hard about the organization of bureaucracies have looked at the question from a management perspective. This reflects the traditional view that “the field of administration is a field of business. It is removed from the hurry and strife of politics.” In recent research, I question this approach and argue that it is important to realize that changing the rules governing bureaucracies will affect the behavior of elected politicians, for better or worse.

To study the impact of bureaucratic organization, I collected data on the adoption of the “merit system” by US state governments throughout the 20th century. These were the reforms that first introduced civil service protections and merit-based recruitment into American state bureaucracies. Due to the nature of American federalism, the reforms happened largely independently of similar reforms at both the federal and the local level. While some states adopted the merit system as early as the late 19th century, most reforms occurred much later in the second half of the 20th century. The list begins with New York (1883) and Massachusetts (1885), and ends with Mississippi (1977) and West Virginia (1989). Texas is the only state that never adopted a comprehensive merit system for its state workforce.

Compared to the earlier system of political patronage, these reforms clearly limited politicians’ ability to exercise pressure on state workers. Not only were they no longer able to hire loyal employees based on referrals from party officials, their ability to get policies implemented in exactly the way they wanted was also severely limited. Bureaucrats protected by civil service rules would have the final say in implementing a wide range of policies, from the distribution of social assistance checks to the selection of contractors for public projects.

I find that once politicians’ ability to influence policy implementation was limited in this way, their response was to redistribute public funding from state bureaucracies to local governments, as Figure 1 illustrates. Government spending followed the path of least resistance: allocating more funds to friendly local governments and less to independent state bureaucracies was a rational response from state politicians who wanted to retain control over public spending. The evidence shows that this pattern appears in overall spending as well as certain categories that we tend to think of as politically sensitive, such as spending on roads and welfare. As a result of the introduction of the merit system, the share of state government budget that was being transferred to local governments grew by an average of 3 percentage points relative to a mean of 27 percent. In road spending, the growth of the share of these intergovernmental transfers was around 2 percentage points relative to a mean of 18 percent, and in welfare spending the share grew by as much as 15 percentage points relative to a mean of 22 percent.

Figure 1 – Effects of merit reforms on redistribution of public funding 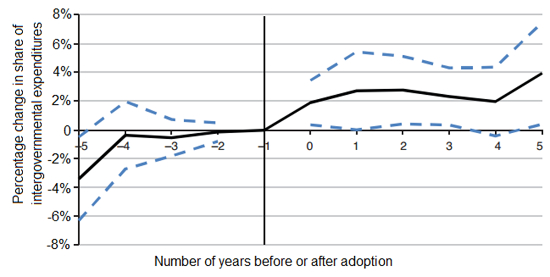 Note: The figure plots coefficient estimates from regressing the fraction of intergovernmental expenditures on five leads and lags of Merit. The dotted line represents the 95 percent confidence interval. The estimation sample is post-1960, using a balanced set of states to estimate all lags and leads.

The evidence also shows that this reallocation of spending from state to local governments had consequences for total (state + local) spending. In particular, total investment in long-term capital projects, which is often viewed as a key driver of economic development over this period, decreased following the introduction of the merit system.

Whether the impact of these civil service reforms was beneficial overall is a difficult question. Even if the increased transfers to local governments were undesirable, reform likely increased the quality of state bureaucracies and the efficiency of government spending that remained at the state level. As of yet, there is very little quantitative research that one can rely on to judge the overall impact of these and similar reforms. No-one knows what we will gain and lose from overhauling the rules governing public employees, as in the recent US reforms. What is certain is that these reforms are likely to affect not just the government workers themselves, but also the behavior of their bosses, the elected politicians. Mirroring my findings from the earlier periods, it is possible that less insulation and more flexibility in the state workforce may give state politicians an incentive to centralize spending and rely less on local governments for service delivery.

This article is based on the paper ‘Civil Service Rules and Policy Choices: Evidence from US State Governments’ in the American Economic Journal: Economic Policy.

Gergely Ujhelyi – University of Houston
Gergely Ujhelyi is an assistant professor in the Department of Economics at the University of Houston. He has worked on a wide range of public policy issues in the US, Argentina, Mexico, and South Africa. His current research focuses on the organization of public employment and its implications for political and economic outcomes.