One of the arguments put forward for the legalization of drugs such as marijuana, is that it will lead to a fall in violence associated with the black market for drugs. But should the two US states who have recently legalized the growth and consumption of marijuana now expect such a fall in violent behavior? Using data from the time of alcohol Prohibition in the 1920s, Emily Owens finds that violent homicides for those in their 20s (the age commonly associated with criminal violence) increased during Prohibition, and then fell once it was repealed, while violent homicides fell for those in their 30s, largely due to less alcohol fuelled violence.

On July 7th, 2014, the state of Washington joined Colorado in a grand social experiment going on in the United States: licensed Washington businesses are now able to sell marijuana, grown by licensed farmers, to any willing customer.   One (of many) arguments for legalization is that offering pot smokers an alternative to a product produced and sold on the black market cuts into the profits of drug dealing gangs.  Driving these gangs out of business will then reduce the amount of violence and crime in society.

There is sound economic theory behind this argument.  The intuition is that people who buy and sell goods in black markets aren’t subject to the same laws and regulations that protect buyers and sellers in legal markets; you can call the police if your mechanic steals your car, but it’s hard to sue your heroin dealer in small claims court.  In an unregulated black market, the people who get the best deals are the ones who are good at coercion, which includes using physical force.  When marijuana is simply another legal commodity, we would expect that any black market-based violence to disappear.

Many Americans tend to point to the rise and fall of Prohibition, those 13 years when the US government criminalized the manufacture, transportation, and sale of intoxicating beverages, as cautionary tale of government bans causing an explosion in black market violence.  I find that this increase in Prohibition-related black market violence did in fact occur, and that this may have important implications for states that legalize the production and sale of marijuana.

Three important facts are frequently overlooked in the legend of crime during of Prohibition.  First, the early 20th century was a time of major social upheaval and demographic change, and you can’t isolate the impact of the black market for alcohol without taking these other factors into account.   Second, in many parts of the US, Federal Prohibition was actually redundant; it’s not clear that a 1920s spike in homicides in Virginia can be attributed to Prohibition when Virginians hadn’t been able to buy a drink since 1914.  Third, most of us take modern US crime data, compiled by the Federal Bureau of Investigation, for granted.  Before the 1930s, newspapers covered “crime sprees” every summer, but the only way to really measure crime in the US was to use aggregated mortality records from a handful of states that reported to the US Census Bureau.

Making matters more complicated, any increase in homicides caused by the black market violence has to be weighed against the safety of those who would have been harmed by people who drank too much.  Most of us know about the exploits of Al Capone and bootleggers with tommy guns because those exciting stories were covered in the media.  But most of the crimes that happen when someone has drunk too much (a fight gets out of hand or a family member is beaten) are mundane acts of violence which don’t get attention in the local paper.

In recent research, I showed that once you took state dry laws and demographic characteristics like urbanization, education, immigration, racial composition, age patterns, and New Deal spending into account, it’s not clear that outlawing alcohol affected crime rates at all.  Some state dry laws actually lead to a reduction in total homicides.  Overall, in the early 20th century, patterns of urbanization and New Deal spending, and not the existence of a black market for alcohol, were really driving overall homicide rates in the US.

My empirical findings don’t mean that the legends of violent bootlegging are false; they mean that any increase in black market violence during Prohibition was essentially offset by a reduction in “drunken” homicides.  In other words, looking at overall crime rates actually doesn’t tell us how violent black markets are – total crime may have gone up or down, depending on how much “drunken” violence is reduced.

Modern crime data allow us to measure those two types of homicides separately.  Since 1974, the FBI’s Supplementary Homicide Reports have recorded the circumstances, as well as characteristics of the victim and offender, for a large fraction of homicides in the country.  When you take a look at who is killed by black market violence (for example, people shot in a drug deal gone bad or prostitutes attacked by their clients), one very robust pattern emerges: relative to other homicide victims, the victims of black market violence are 60 percent more likely to be in their 20s.  In contrast, people killed in accidents, in fights, or by family members (all things that are more likely to happen if one or more of the parties is drunk or high) are much more likely to be older than 30 or younger than 20.

The persistent link between age and circumstances of death in modern homicide data allows us to measure crime during Prohibition in a new way.  The Census mortality records contain very little information about homicide victims, but they do consistently report death rates by the age of the deceased.  If violence is an important part of the black markets, then criminalizing the market for alcohol should have increased the homicide rate for people in their 20s relative to the homicide rates of people over 30 or under 20 years old.

My research assistants and I compiled Census mortality records to see whether or not banning alcohol sales changed the composition of homicide victims in US states between 1900 and 1940.  Figures 1 and 2 show the average, age-specific, homicide rate in the years leading up to and after a state went “Dry,” and when alcohol sales were legalized. 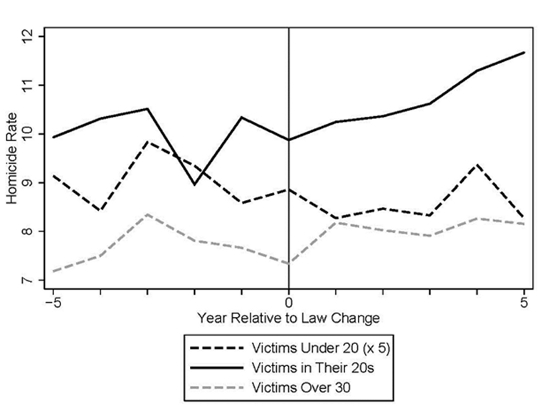 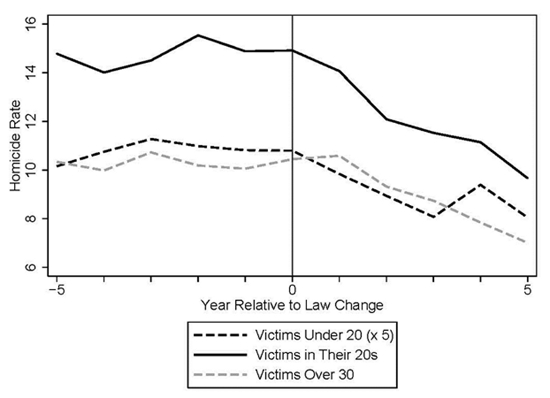 In this case, the data are consistent with the legend.  Going Dry changed homicide rates in the way we would expect if market based violence increased and drunken violence fell.  Even more striking was that this relative increase was largest where US folklore predicts it would be:  Northern, urban states with large foreign-born populations.

Today, all eyes are on Colorado and Washington to see if legalizing marijuana is good or bad for society.  The physical effects of consuming marijuana and alcohol are different, as is the social (and criminological) cost of using each drug.  However, what limited data we have on the nature of crime during Prohibition suggest that a reduction in any black market violence associated with the marijuana trade is a likely possibility.

This article is based on the paper, ‘The American Temperance Movement and Market-Based Violence’ in the American Law and Economics Review.