The rise of globalization in recent decades has meant the increasing flow of capital, both financial and human.  But does this increased human mobility have benefits for workers? In a new study, Susan Pozo investigates how international experience can benefit workers’ wages. By examining the U.S. population that was born in other countries to parents with U.S. citizenship, i.e. those who gained, but did not seek, international experience she finds that wages for this group are 5 percent higher for women and 2.5 percent higher for men.

The increased interest in globalization has led to spirited discussions about the benefits to corporations and institutions of acquiring international human capital.  By mastering foreign languages, learning to be culturally sensitive and familiarizing oneself with alternative problem solving strategies, colleges and universities tout the benefits that students obtain from study abroad. This is based on a belief that international experience is a form of human capital sought after by employers wishing to better manage international supply chains, engage a multicultural customer base and negotiate increasingly complex and unfamiliar business relationships across the globe.

Do international experiences, in fact, raise workers’ earnings and productivity?  While plausible, there is limited evidence to support this claim.  To date, scholars have tried to answer this question by comparing the earnings of returned-migrants with individuals who never migrated, or by measuring the contribution of immigrants to economic productivity.

I use an alternative methodology for obtaining a sample of individuals who have been “treated” with international experiences but it was not of their own choosing.  I study the U.S. population that was born in other countries to parents with U.S. citizenship, arguing that as children, they, unlike other migrants, did not select to gain international experience.  I compare these foreign-born Americans to Americans born on U.S. soil with comparable characteristics.  I obtain my sample using the citizenship question in the 2006-2010 American Community Survey (ACS) — the successor to the “long-form” census questionnaire.  Figure 1 shows how the survey classifies people who are U.S. citizens or not. 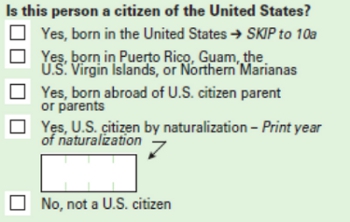 I classify those checking the first or second box as born on U.S. soil and those checking the last two boxes as immigrants.  I exclude immigrants from this study.  Individuals responding as belonging to the third category – born abroad of an American parent or parents – are my primary population of interest.  These persons may have been born to U.S. foreign service workers, U.S. military personnel, U.S. executives managing joint ventures or NGO workers. They are colloquially known as, “Missionary Kids,” “Military Brats,” “Global Nomads,” and “Third Culture Kids.” They are born with U.S. passports and are likely cultured into the U.S. ethos, but were exposed to at least one non-U.S. culture — serving as my “treated” group.  I refer to them as INTs (international human capital-enhanced individuals) who constitute about one-percent of the working age non-immigrant U.S. population.

There are, of course, other segments of the U.S. population that have been treated with international experiences but are not identified by the census as such, e.g. the siblings of the treated group who were born in the U.S. and traveled with their parents on the foreign assignment.  They will have international experience but will not be classified as INTs in this study, potentially biasing my empirical results against finding an international human capital-effect. 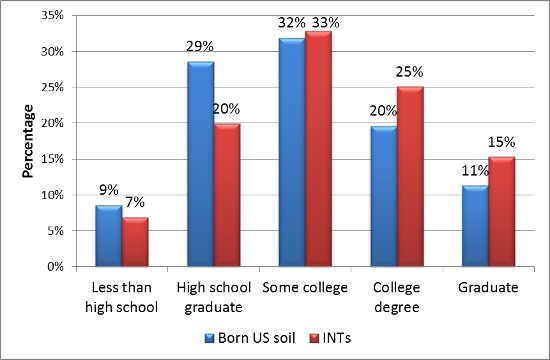 In order to ascertain whether international human capital-enhanced individuals earn a wage premium, I estimate a standard wage equation, for full time workers between 26 and 64 years of age, adjusting for standard characteristics.  I estimate separate regressions for men and women to account for differing employment and work patterns.  Controls for marital status, educational status and military service are included, as are dummy variables for each year (2006-2010) to account for the business cycle.  I find, on average, that INT women earn about 5 percent more and INT males about 2.5 percent more than their U.S.-born counterparts with the same characteristics.

Aconcern is that of occupational selection.  If more INTs select into high paying occupations then we should expect to see that they earn a premium, but it should be attributed to occupation and not to international human capital.  To control for this possibility, I account for each person’s occupation and find that an earnings premium for INTs remain.  It is a bit smaller (4.1 percent for women and 1.9 percent for men) but with comparable significance.  The treated group, Americans born abroad, still outperforms the control group, Americans born in the U.S.

It is possible that international experience is more valuable in certain occupations.  I estimate the size of the premium by occupation using interaction terms.  As Figure 3 shows, female INTs earn a premium in all occupations except for farming.  For males, shown in Figure 4, the results are mixed.  While men still earn premia in most occupations, they are compensated more poorly in sales, construction, repair and production.  Nonetheless, INT men still earn sizable premiums in the managerial, professional, farming, transport, and service occupation categories. 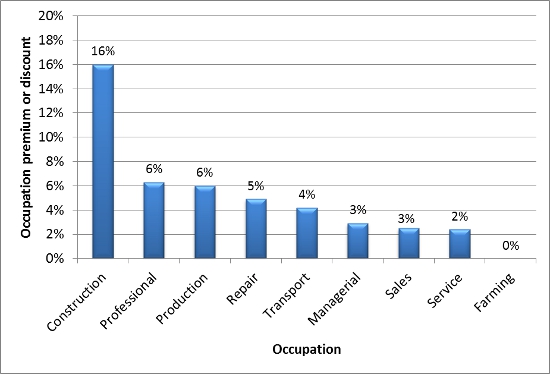 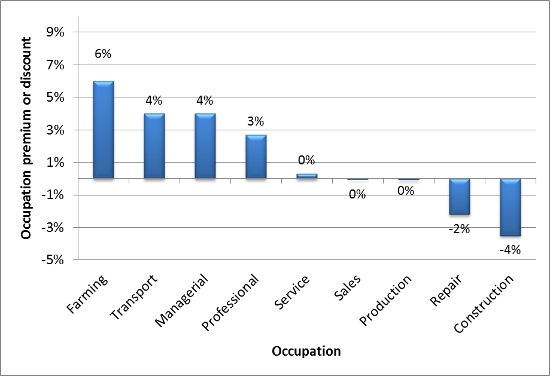 Overall, my results suggest that there are measurable returns to international human capital.  While, on average, these returns seem modest—about 5 percent for women and 2.5 percent for men, the returns are sizable in certain occupations and seem to always be present in the managerial and professional categories, occupations that particularly value creativity and innovation.  If anything, my methodology likely underestimates the size of the premium. These findings bolster the claim that the U.S. labor market does reward international experience.  This suggests real monetary benefits to participating in study abroad programs, to seeking international postings, to learning languages and to acquiring multicultural experiences.

This article is based on the paper ‘Does the US Labor Market Reward International Experience?’ in the American Economic Review Papers and Proceedings.