Many blame the ongoing polarization of Congress on the system of primary election that often rewards the most extreme candidates on either side. But are “open” primaries, where more than just regular partisans can participate the solution to this polarization? Using data from two decades of state-level experimentation with primary laws, Eric McGhee finds that primary races that are “pure closed” can actually result in candidates that are slightly closer together ideologically than those that are “pure open”. Despite this, California has found some success with open primaries increasing moderation among party nominees, and it may well signal the conditions for success.

Politics in the United States has become forcefully divided along party lines. Democrats and Republicans are miles apart on the issues, and partisanship seems to have permeated every nook and cranny of American political life.

This can create problems for the U.S. system, which famously relies on “checks and balances” between the competing institutions of the Executive and Legislative branches.  If the president and Congress are different parties and these parties refuse to negotiate, American government comes to a grinding halt.  We have seen some signs of that in the last few years, most recently in October 2013 when disagreement over a spending bill forced the government into a partial shutdown. Is there any way to incentivize moderation and bipartisanship to avoid more debacles like that one?

Many observers think the answer lies with another eccentricity of the American system:  primary elections.  In a traditional primary election, the parties let their rank-and-file partisans choose the party’s nominees for office.  “Rank-and-file partisans” in this context mean voters who are both registered with the party and who care enough to vote on the nominees. Because most voters aren’t either one of these things, the decisive voter in these primaries ends up being a committed partisan.  These partisan voters then choose the most extreme candidate on each side, leaving the broader group of centrists who show up in the general election with a choice between polar opposites, when all they really want is a moderate.  Or so the logic goes.

Reformers have offered a simple solution:  allow more than just registered partisans to participate in primary elections.  The hope is that if the primary electorate starts looking more like the general electorate, it will start choosing more moderate candidates as well.  The “crossover” voters—those who identify with one party but vote for a different one—will help pull candidates away from their party bases and toward an accommodationist middle.

Such “open” primaries take many different forms.  Some allow registered independents to participate in a party’s primary, but only if the party agrees to let them.  Others go further and eliminate party registration, allowing any voter to choose any party primary each time around.  These basic options also admit many gradations of “openness” based on how public and permanent one’s choice of parties turns out to be.

Nor does this exhaust all the possibilities.  The most radically open—sometimes called “nonpartisan”—primaries don’t even require voters to choose a party primary.  They put all candidates on the same ballot and deliver this ballot to all voters.  Voters can then choose candidates of different parties for different offices—say, a Democrat for U.S. Senator, a Republican for the U.S. House of Representatives, an independent for state legislature, etc.—just as they would in a general election.

The basic idea of promoting moderation through primary reform seems sensible, but there are a number of ways it could go wrong.  First, it’s not clear that the primary electorate on each side is all that different from the general electorate, or at least the portion of the electorate that votes for that same party in the general election.  Second, the logic of broadening the primary electorate is far more complicated than it first appears.  It depends on the number of candidates who run and the positions they take on the issues.  Efforts to model this logic more rigorously haven’t consistently predicted a moderate winner, even if the pivotal voter in the primary is moderate.

Finally, the voters themselves often have trouble playing their part.  Either there aren’t enough crossover voters to change the outcome, or voters aren’t aware of the ideological differences between the candidates in the first place.  In fact, all the moderation in the world can’t help a candidate without the money or manpower to run a visible campaign, and money and manpower come from the same activists and party leaders the open primary was meant to supplant.

So do open primaries promote moderation, or not?  Unfortunately, measuring their impact has been tough.  The best measures of ideology—those for the U.S. Congress—haven’t offered good statistical leverage in certain key states.  For example, Alaska has frequently tinkered with its primary system, but has had the same one U.S. representative for the past four decades. And taking advantage of the “laboratories of democracy” at the state level has stymied on the different policy agendas in each state.  If state legislators in different states are voting on different issues, how can we compare them to each other?

Recent breakthroughs in measuring ideology at the state legislative level have changed that.  It is now possible to compare legislators from different states on the same ideological scale, so that, say, a conservative in Oklahoma means the same thing as a conservative in Massachusetts.  And the last twenty years or so have also seen a lot of state-level experimentation in primary laws, offering leverage on the question at the same time that the ideology measures have become available.

Using these data, my colleagues and I have found that open primary laws do virtually nothing to promote moderation.  The figure below shows the ideology of Democratic (hollow points) and Republican (solid points) legislators over time.  The nation’s primary systems have been divided into several different groups here, but the most important distinction is between “pure closed” (the traditional primary system where only party registrants can participate) and all others.  If open primaries encouraged moderation, then the Democratic and Republican points in the “pure closed” graph would be farther apart (closer to the top and bottom) than the points in any of the other graphs.  Instead, if anything they are a little closer together.  And ideology in these systems is fairly stable over time.  In fact, most of the ups and downs that are visible can be explained by states dropping in and out of these different categories. 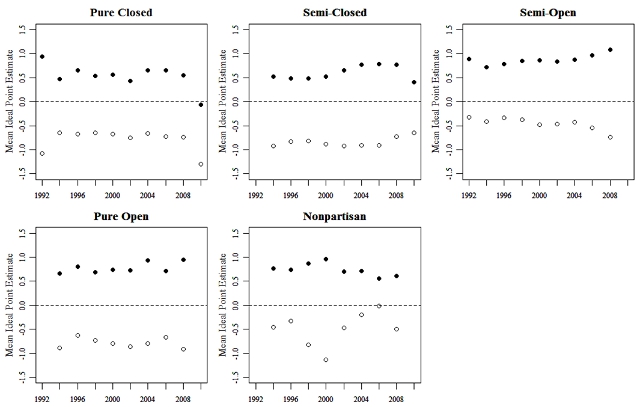 But on balance, both the theory and the evidence is equivocal enough that we should be skeptical of the link between open primaries and moderation, no matter how sensible it might seem at first blush.  What seems like a moderating reform might just deliver more of the same.

This article is based on the paper ‘A Primary Cause of Partisanship? Nomination Systems and Legislator Ideology’ in the American Journal of Political Science.