Mass shootings in recent years such as those Newtown and Aurora in 2012 have once again placed the spotlight onto the role of violent videogames in encouraging youth violence. But is there a link between the two? Christopher J. Ferguson argues that the evidence shows that videogames do not cause violence, and that any alarmist claims that they do are based on minimal data. He writes that moral panics, such as those that arise after mass shootings, encourage psychologists to make extreme claims in order to gain prestige, headlines and grant funding.

In June 2011 the US Supreme Court struck down a California law regulating the sale of violent video games to minors in a 7-2 decision.  In the majority opinion the court stated, regarding the research on videogame violence: “These studies have been rejected by every court to consider themand with good reason.”  The Supreme Court struck down the California law, ruling that videogames enjoy First Amendment protections as do minors and stated the existing research provided no compelling evidence that video game harm minors.

This result may have seemed a surprise for those who believed fervently that violent video games were harmful to minors.  After all, scholars had been assuring us that media violence had effects on us nearly as dramatic as smoking on lung cancer or that up to half of the homicides in the US could be attributed to media violence, at least in part. So what happened?

In truth, some scholars had been warning that the scientific community was heading for a credibility crisis for some time due to these exaggerated claims.  The reason for this was simple: as the Supreme Court rightly perceived, the evidence linking video game violence to “harm” was weak, inconsistent and often based on studies employing questionable researcher practices (which is a fancy way of saying scholars appear to have nudged their data, whether intentionally or not).  The conclusions of the US Supreme Court were reiterated by reviews by the governments of Australia and Sweden about the same time.  And as Figure 1 shows, surveys of researchers and clinicians have now made clear that no consensus exists among experts on the impact of media violence on society.

Figure 1- Summary of survey results of experts on impact of media violence on society. 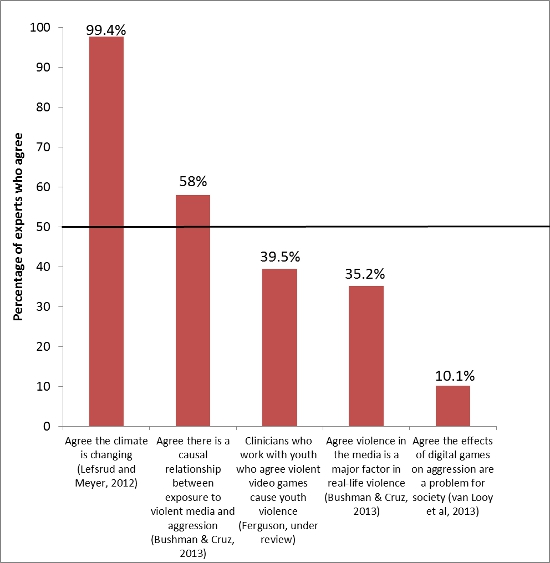 Note: Created by Patrick Markey and modified with permission here.

Increasingly, research from various labs is making it clear that the influence of video games on youth aggression is minimal.  My own work has found little evidence for a relationship between video game violence and youth violence.  Long-term outcome studies from Germany have similarly not found any relationship.  Other research finds that the release of violent games is associated with immediate declines in violent crime, not increases.  This is consistent with overall declines in youth violence occurring during the decades, as shown in Figure 2 below, in which violent videogame sales soared.  This is not to say that no studies find any evidence for effects, but these tend to be very small.  For instance, on study from Canada found that playing violent video games was associated with about a half a percent increase in later youth aggression.  Similar results were found in a recent Dartmouth study. 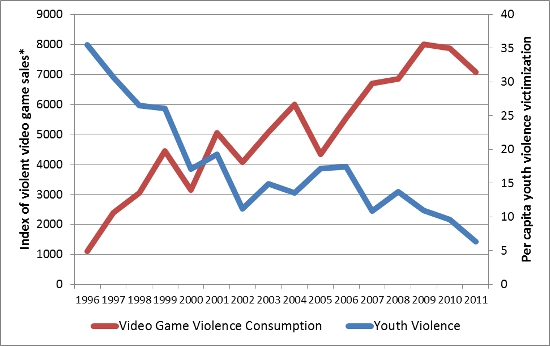 Why, then do people seem so resolute in believing that video games are harmful?  The Dartmouth study actually provides one hint of the problem.  In the accompanying press release, the authors imply that video games are a serious problem.  Yet even taking the study at face value and ignoring its flaws (such as asking youth if they play violent video games, then whether they engage in violent or other risky behavior setting up rather obvious pressure for certain types of responses) the authors find that playing violent video games only raised aggression by roughly half a percent.  There’s a difference between statistical significance and practical significance and scholars have often seemed ignorant of this issue, making alarmist claims to the public based on minimal data.

At issue is that society itself, when engaged in a cycle of moral panic, often sets up incentives for scholars to make more extreme claims.  Grant funding, news headlines, professional prestige, all come from raising alarms about pressing societal problems psychologists will ride to the rescue of.  That’s perhaps why the American Psychological Association (APA) released a policy statement in 2005 linking video games to aggression.  That policy statement, which the APA allowed to be written by scholars heavily invested in anti-media advocacy reviewing their own data, is now known to be flawed.  The APA is currently reviewing it and 230 scholars have written an open letter to the APA asking them to retire it for good.  That policy statement, written by invested scholars without any skeptics invited, should not be considered a neutral review.  Unfortunately the task force reviewing the policy statement is also less than neutral, with two of the seven scholars having signed an amicus brief supporting California in the Brown v EMA case mentioned above and two others having worked closely with media scholars who have advocated “harm” beliefs.  Although we may hope reason prevails, the APA has not taken adequate care to preserve their reputation as an objective arbiter of scientific proof.

Moral panics on media are nothing new, known to have existed in the times of the ancient Greeks, and passing through waltzes, jazz, rock and rap, Harry Potter, Dungeons and Dragons, novels and even translations of the Bible in more recent times.  Psychiatrists testified before congress in the 1950s that comic books caused not only delinquency but homosexuality (Batman and Robin were secretly gay, it was said) and scholars testified before congress in the 1980s that rock musicians from Twisted Sister to AC/DC to Cyndi Lauper (yes, Cyndi Lauper) were causing sexual immorality, violence, suicide and occult worship.  These claims seem absurd in retrospect, yet we fail to learn from history.  As with past moral panics, scholarship from Oxford University has clarified that fears of video games are largely the domain of older adults who don’t play them or know much about them.  In essence, the writing is already on the wall of the great videogame panic.

Yet it resurfaces whenever there is a mass shooting in the US involving a young male (although when an older male commits a mass shooting, videogames are conveniently ignored).  Despite that one of the preeminent experts on mass shootings referred to links between these events and videogames a “myth,” politicians and some scholars can’t resist insinuating links may exist.  The 2012 Newtown shooting should be a lesson to us.  The sad shooting of nearly two dozen elementary children by a 20-year-old male set off months of rumors, hearings and uninformed speculation about the alleged role of videogame violence in the shooting.  But the official investigation report, released 11 months later, found he spent most of his time playing non-violent games like Dance, Dance Revolution.  Let this be a lesson to us: like them or hate them, videogames don’t make us violent.

This article is based on the paper ‘Violent Video Games, Catharsis Seeking, Bullying, and Delinquency: A Multivariate Analysis of Effects?‘, in Crime & Delinquency.