For those states that expand it, Medicaid may be a gateway to enrollment in the Supplemental Nutrition Assistance Program for those in poor health.

For those states that expand it, Medicaid may be a gateway to enrollment in the Supplemental Nutrition Assistance Program for those in poor health.

The federal government’s Supplemental Nutrition Assistance Program (SNAP) provides more than 45 million Americans on low incomes with assistance to purchase food. Poor access to food – and low quality food – is often a key contributor to poor health outcomes, meaning that policymakers are keen to increase the number of SNAP enrollments by the chronically ill. In new research, Chad D. Meyerhoefer and Yuriy Pylypchuk look at the link between health, and whether or not those with low incomes enroll in SNAP and Medicaid. They find that individuals with diet-sensitive and other chronic conditions are more likely to enroll in SNAP if they are already enrolled in Medicaid. They argue that coordinating measures aimed at improving access to health care, such as the Medicaid expansion under the Affordable Care Act with programs like SNAP, would help low-income individuals better manage the burdens of chronic disease.

Following significant welfare reforms in 1996, the Supplemental Nutrition Assistance Program (SNAP, formerly the Food Stamp Program) has emerged as the cornerstone of the United States’ social safety net. The purpose of SNAP is to allow low income Americans to afford a nutritionally adequate diet. For many poor households SNAP benefits finance a large portion of their food purchases, freeing up income for expenditures on goods other than food. While not targeted specifically at individuals in poor health, the program does enroll many households that contain a member with serious medical problems. These households often meet the SNAP eligibility criteria because an adult’s earning potential is constrained by their own, or a family member’s, disability or chronic illness.

More broadly , there are at least three reasons why an individual’s health and disability can influence their likelihood in enrolling in SNAP: (1) Poor health imposes financial hardships when unhealthy individuals have difficulty either finding or maintaining employment, or paying for health care costs; (2) Many chronic conditions are diet-sensitive and require specialized diets, which could increase individuals’ preferences for more expensive foods; (3) Unhealthy low income individuals are also more likely to enroll in Medicaid; a public health insurance program that targets certain categories of poor Americans. Experience with the Medicaid program may increase an individual’s likelihood of SNAP enrollment through better knowledge of the social welfare system or reduced stigma.

Given the rising rates of chronic disease in the U.S., our research seeks to characterize the importance of individual health characteristics, and chronic conditions in particular, on SNAP and Medicaid enrollment decisions. This information is important for state policy makers and SNAP program administrators who seek to increase SNAP enrollments by the chronically ill, who are among the most vulnerable members of the low income population. It can also be used to help forecast how health care reforms instituted under the Patient Protection and Affordable Care Act might change the health characteristics of SNAP participants. The ACA removes the categorical eligibility restrictions from the Medicaid Program and expands its gross income eligibility to include the full SNAP population. However, following the passage of the ACA, the U.S. Supreme Court made this expansion optional, and at present, just over half of states are acting to expand their programs. If the Medicaid Program serves as a conduit for individuals with poor health to enroll in SNAP, states participating in the Medicaid expansion will serve SNAP populations in poorer health than states that opt-out. Our estimates can be used to predict differences in the health characteristics of future SNAP participants across these two sets of states.

Using data from the 2000-2005 Medical Expenditure Panel Survey we evaluate the impact of health status on the likelihood that low income adults enroll only in SNAP; enroll only in Medicaid; enroll is both SNAP and Medicaid; or do not enroll in either program. Based on measures of overall physical and mental health, we find that those in good physical health are more likely to enroll in SNAP, while those in the poorest physical and mental health are much more likely to enroll in both SNAP and Medicaid.

In addition, individuals with at least one diet-sensitive condition are more likely to jointly enroll in SNAP and Medicaid or only enroll in Medicaid, but are less likely to only enroll in SNAP or neither program. Moreover, the magnitude of the selection effects is large. Having a diet-sensitive chronic condition increases the probability of only enrolling in Medicaid by 8 percentage points and decreases the probability of only enrolling in SNAP by 6 percentage points. Both of these effects are 40 percent of the average probability of enrollment in the respective category. Selection into the programs by individuals with other chronic conditions is similar to those with diet-sensitive chronic conditions. Figure 1 contains a subset of these effects together with a measure of disability: whether an individual needs help with activities of daily living. 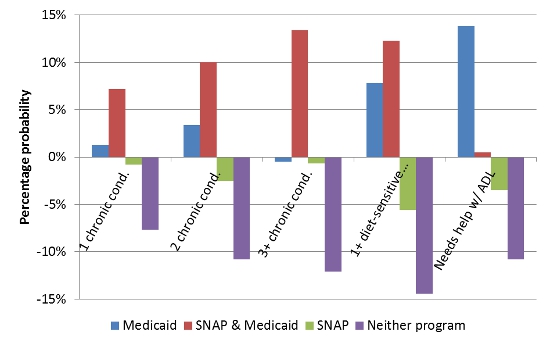 Our models of enrollment choice suggest that the Medicaid program may serve as a gateway to SNAP by those in poor health. To explore this possibility further, we estimate the impact of health characteristics on the conditional probability of SNAP enrollment given Medicaid enrollment. These models confirm that individuals with diet-sensitive and other chronic conditions are more likely to enroll in SNAP conditional on Medicaid enrollment.  The strongest selection into SNAP is by Medicaid enrollees with cardiovascular disease and gastrointestinal disorders.

If SNAP-eligible individuals who are currently enrolled in Medicaid were to enroll in SNAP, the SNAP program would serve more individuals with chronic medical conditions. As a result, state-level efforts to coordinate enrollment between the two programs, or state compliance with the expansion of Medicaid legislated under the ACA, will draw less healthy individuals into SNAP, many of whom have diet-sensitive chronic conditions.  We also find evidence of some potential barriers to SNAP enrollment by those with functional limitations making it difficult for them to accomplish activities of daily living. While it is important to keep in mind that SNAP is, by design, an income support program rather than a health program, per se, higher enrollment of chronically ill individuals would increase the potential to improve the health of low-income individuals by coordinating initiatives designed to manage chronic disease with SNAP.

This article is based on the paper, ‘The Effect of Chronic Illness on Participation in the Supplemental Nutrition Assistance and Medicaid Programs’, in the American Journal of Agricultural Economics.