Stronger welfare policies meant that older workers who lost their jobs during the Great Recession were more insulated from mental health issues in Europe than in the U.S.

Stronger welfare policies meant that older workers who lost their jobs during the Great Recession were more insulated from mental health issues in Europe than in the U.S.

The old cliché states, “Money doesn’t make you happy”, but is this really true? In new research, Carlos Riumallo-Herl finds that wealth had an insulating effect against depression for older workers who lost their jobs during the Great Recession in the U.S. He finds that in comparison to workers in the U.S., those in Europe with low wealth who were made unemployed at the same time did not suffer from depression. He argues that this can be explained by the greater generosity of European unemployment safety nets which mean that people did not have to draw on their own wealth whilst unemployed, and were thus more financially secure.

In recent decades the world has faced several economic recessions, with none of them as persistent and critical as that which began in 2008. The ‘Great Recession’ of 2008 had dramatic consequences on employment worldwide, and particularly among older workers near retirement. Unemployment rates for individuals aged between 50 and 64 years rose from 3.1 percent to 7.3 percent in the United States, and from 5.4 percent to 6.2 percent in the European Union. Job loss at this stage of the life cycle has significant consequences beyond financial ones. In particular, for older working people becoming unemployed increases the likelihood of suffering from depression or other mental disorders.

In new research using longitudinal data on more than 38,000 individuals between the ages of 50 and 64 from the U.S. Health and Retirement Survey (HRS) and the Survey of Health, Ageing and Retirement in Europe (SHARE) between 2004 and 2010, we find that while wealthier American workers suffered less from depression than those with little or no wealth during the Great Recession, there was no similar difference among Europeans at the same time.

Public unemployment policies have a fundamental role in mitigating the consequences of job loss before retirement, however the approaches differ substantially between Europe and the United States. In Europe, unemployment policies are more generous and comprehensive, thus serving as alternative pathways towards retirement. Particular programs such as housing or insurance benefits protect older workers from income losses and allow them to retire earlier.  On the other hand, in the United States, unemployment benefit programs are stricter and less comprehensive thus rendering American workers more susceptible to the income losses of unemployment. Such policies discourage early retirement. As an example, many European countries have unemployment assistance programs of unlimited duration once first‑tier unemployment benefits are exhausted, while extended assistance is non‑existent in the United States. 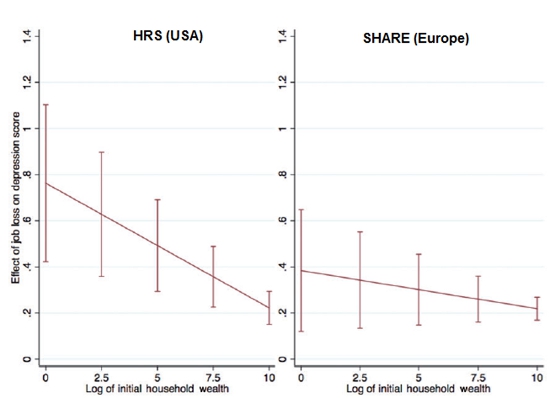 As a consequence, wealth has become an important resilience factor in the United States that is of less importance in Europe. As Figure 1 illustrates, wealthier American workers suffered less from depression than those with little or no‑wealth during the ‘Great Recession’, however no similar gradient occurred in Europe. This can be explained by the greater generosity of the European unemployment safety nets. Comprehensive unemployment benefits translate into financial security and a considerably lower depletion of individual wealth throughout the unemployment period. Thus, older individuals in Europe reach their retirement age without drawing from their savings or collecting reduced social security benefits due to early retirement.

It is however important to emphasize that regardless of the social context job loss has considerable consequences on individual mental health. This suggests that earning losses might be only one among several pathways through which job loss influences depression. Other non‑financial mechanisms include withdrawal from social networks, loss of a social role, social stigma and psychological distress. For example, social networks within jobs may improve mental health by enhancing access to social support structures and buffering the impact of stress on mental health. Additionally, job loss may lead to increased anxiety and negative health behaviors. It is also possible that work has several other non‑financial benefits that include providing a time structure for the day, self‑esteem, status formation, and the sense of contributing to a collective purpose. Finally, work may promote the use of cognitive skills, decisions latitude, interpersonal contact, social status, and personal motivation. Consequently, unemployment policies should aim to re‑employ older individuals not only for the financial benefits, but also for the non‑financial ones.

Since the financial loss is not the sole pathway by which job loss impact mental health, social protection programs may not be sufficient to eliminate the impact of job loss which occur via financial and non‑financial mechanisms. Nevertheless, whereas the effect of job loss is confined to the poorer Americans, both rich and poor Europeans experience relative small effects of job loss on mental health. Thus highlighting the important mitigating role that social protection policies have.

While unemployment benefits and income transfer programs buffer the impact of job loss on mental health. The stronger effect of job loss on depression in poor Americans compared with poor Europeans should prompt future research on the potential role of specific social protection programs in buffering the impact of job loss among less wealthy workers and their families. Furthermore, policy should be further developed to achieve a balance between the early retirement incentives that these programs create and their protective components.

This article is based on the paper, “Job loss, wealth and depression during the Great Recession in the USA and Europe’ in the International Journal of Epidemiology.