The Liberal Party looks poised to do well in next year’s Canadian elections, writes Claudia Chwalisz. However, the Conservatives have changed the rules of the game to their advantage with the controversial ‘Fair Elections Act’ – a bill that suppresses voter turnout, increases money’s influence on results, and eliminates the independent elections monitor.

Ahead of next year’s Canadian elections, the battle lines between the Liberals and the Conservatives are being drawn. A number of political earthquakes went off this year – Quebec rejecting the sovereigntists, the Liberals’ surprising majority win in Ontario, and the controversial ‘Fair Elections Act’ passing – which indicate that it will be anybody’s game. Sadly for the New Democrats (Canada’s social democratic party), a two-party race will likely prevail in most provinces.

In April, the separatist Parti Québécois (PQ) suffered an unexpected blow in Quebec’s provincial election, despite a realistic prospect of winning a majority at the outset of the campaign. In the end, the Liberals won a majority government. It marked the smallest share of the popular vote for the PQ since 1970. So what happened?

It appears that Quebecers’ appetite for sovereignty is no longer there. When Pierre Karl Péladeau, one of the PQ’s star candidates, raised his fist in the air and announced he wanted Quebec to be an independent country, the PQ plummeted in the polls. Research by sociologist Claire Durand shows that ahead of previous referenda, young people were the bedrocks of support for sovereignty. The ‘dying federalist hypothesis’ was, as older people die, and if young people remain sovereigntist, then sovereignty will eventually get majority support. However, since 2010, support among young people has fallen below 40%, in line with the rest of the population. As measures have been taken over time to accommodate some nationalist concerns, the sovereignty issue has been defused for younger Francophones. They feel that Quebec has the capacity to fulfil its own unique goals. Today, one is left wondering what the PQ still stands for.

In addition, with Justin Trudeau, son of former Prime Minister Pierre Trudeau, now leader of the Liberal Party, the Liberals will likely do well in Quebec next year. Federally, the Liberals are leading in Quebec with 39.2% (versus 24.8% for the NDP and 15.3% for the PQ) as of 9th September, a number that has been steadily increasing. Even though Liberals have lost over nine federal elections in Quebec since 1980, Quebecers may unite with other Canadians to support them in their collective desire to oust Stephen Harper’s government. 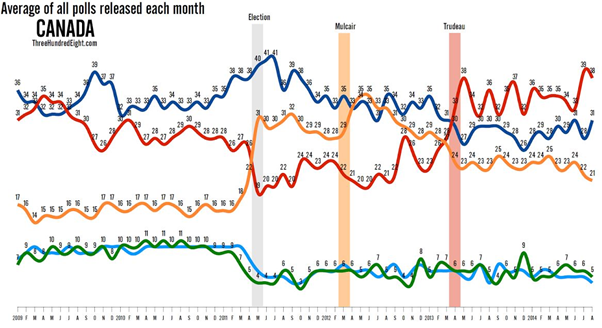 Source: Three-hundred-eight.com, September 9, 2014.
Note: This is a weighted average of the latest federal polls.

A Liberal majority in Ontario against all odds

Two months later, voters in Canada’s largest province elected a Liberal majority despite expectations. Almost 70 per cent of the vote went towards parties on the centre-left. The results were significant for a number of reasons.

Unlike most Ontarian elections, the campaign between the Liberals and the Progressive Conservatives (PCs) was not based around political leadership, but on a clear left-right policy divide. Like in Quebec, a younger generation of voters indicated that economics matter most. The Liberals clearly favour an activist government that embraces the demand side of the economy to get it moving again. On the other hand, the PCs argued that government is the problem, and cutting it down is the solution. Both parties promised to reduce the large fiscal deficit within a year of one another; the key difference was in the manner this is to be achieved. After a close race in the polls up to election day, an unexpected majority voted in favour of a strong role for the state.

Furthermore, although leadership was not the central element of the election campaign, it still matters. Despite the Liberals being in power for the previous 11 years, Kathleen Wynne only took over as party leader last year, distancing herself from the party’s scandals. As Ontario’s first female premier and the first openly gay first minister in Canada, her emphasis on inclusivity proved meaningful. In contrast, Tim Hudak, (now former) leader of the PCs, dragged his moderate party to the hard right, and displayed incompetency by presenting a platform criticised for discernible errors of basic maths.

Looking ahead to 2015, it is uncertain to what extent the Liberals’ victory can be replicated at the federal level. Prime Minister Stephen Harper’s agenda is more centrist than Hudak’s; some who voted Liberal in Ontario will likely vote Conservative in 2015. The question is how many. Since Trudeau’s leadership election, Ontario polls have swung away from Harper for the first time since 2010. The fact that Kathleen Wynne was able to win an outright majority against the odds demonstrates the impact of a strong leader with a clear policy agenda and vision. Justin Trudeau has 13 months to build the broad coalitions of support necessary to win.

Then there is controversial bill C-23, dubbed the ‘Fair Elections Act’ by Conservatives. It passed on 27th June in spite of petitions, letters, and editorials from over 450 academics (Canadian and international), leading newspapers such as the Globe and Mail, journalists, and students criticising the bill for discouraging voter participation and skewing the political advantage towards the Conservatives in next year’s elections. It’s not the first time the Conservatives are accused of attempting to suppress voter turnout.

The Chief Electoral Officer and head of Elections Canada (the independent electoral agency), denounced the bill as anti-democratic. Amongst the changes, the most controversial is the elimination of vouching, a process by which a voter can vouch for another voter who has a government-issued identification but is missing ID that proves name and residence. Critics argue that this will likely disenfranchise more than 100,000 non-Conservative voters, as it is aboriginals, young people and seniors who are most likely to be affected by this change. Furthermore, while Elections Canada previously offered elementary and secondary school programs that explain voting, they are no longer permitted to run any large campaign to encourage turnout.

Elections Canada will also lose the power to monitor and investigate election fraud. Given that Conservatives committed electoral fraud in the last 2011 federal election by sending tens of thousands of non-Conservative voters automated phone calls directing them to non-existent polling booths, this is worrying news. Instead, a new Commissioner of Elections – directly responsible to Cabinet and the Prime Minister, not parliament – will be created.

The ‘Fair Elections Act’ will also enhance money’s role in influencing election results, with individual donation caps to parties increased and fundraising rules being changed in a way that disadvantages parties with donors who can only contribute small amounts.

Together, these amendments will directly impact on electoral outcomes, standing at odds with the principles of political equality and democratic fairness. The fact that the Harper government pushed the bill through by cutting off debate and discussion exacerbates the level of concern. According to a recent Abacus Data poll in mid-August, 25% of Canadians (and 39% of Liberals) consider accountability and trust as a major issue facing the country.

These emerging trends about the Canadian electorate raise important questions ahead of the October 2015 federal election. Although it seems that Trudeau’s Liberals have a good chance of winning next year, the opposition parties and many Canadians fear that the Conservatives will take advantage of the ‘Fair Elections Act’ to try and win with dirty tricks.

This article  originally appeared as a contribution to State of the Left – Policy Network’s regular insight bulletin that reports from across the world of social democratic politics.

September 24th, 2014|Claudia Chwalisz, Elections and party politics across the US, US foreign affairs and the North American neighbourhood|0 Comments
Previous post Next post