Americans are polarized about partisan loyalty and policy, but there is little animosity between cultural and social groups.

Americans are polarized about partisan loyalty and policy, but there is little animosity between cultural and social groups.

Many commentators have expressed fears of a “culture war” between Liberals and Conservatives which appears to have arisen alongside the increase in partisan polarization. But is this increased partisanship fuelled by greater animosity between social groups such as gender, class, age, and religion? In new research which looks at people’s attitudes towards other social groups and their partisanship over the past half century, Christopher Muste finds that social differences on policy issues do not extend to a direct animosity towards other groups which could otherwise reinforce issue-based and partisan polarization.

Recent years have seen an increasingly heated debate about polarization and “culture wars” in America. This debate has been plagued by confusion, reflecting the multiple definitions and measures of these concepts that produce often apparently contradictory research findings among academics.  Often, the ideas of polarization and culture war are used interchangeably; more typically, culture is defined in terms of one or more values (such as traditionalism) or value-laden social issues (such as abortion), and polarization is defined as partisan, ideological or issue differences.  The resulting cacophony of research findings hampers our ability to assess the depth, breadth, and trends in polarization.

In new research, I address this confusion by developing alternative measures of cultural polarization rooted in social science research on social groups and emotions. I analyzed two measures of polarization: social group members’ basic emotions, also called affect, toward their own social in-groups and their opposite out-groups, and the correlations between those group emotions and people’s partisanship.  I find that in general,  in contrast to the policy divisions between social groups observed in prior research there is no direct animosity towards those of other groups, meaning that process of partisan ‘sorting’ along ideological lines has not extended to the social foundations of politics.

To measure emotions, I used the ANES feeling thermometer, which assesses respondents’ positive (warm) or negative (cool) affect toward social groups to evaluate group favoritism.  The measure correlating emotion (affect) to partisanship indicates whether social group favoritism fuels and exacerbates party divisions. By analyzing trends from 1964 to 2012 in the two polarization measures on five major social group cleavages that have been the basis of political conflict and party cleavages in the US – race, gender, class, age, and religion, using ANES public opinion survey data – we can evaluate whether there is a “culture war” in the American public, dividing major cultural groups into hostile and sharply partisan camps.

I first analyze polarization of racial groups.  Given the prominent and enduring role of racial issues in American politics, it would be surprising not to find sharp polarization.  Figure 1 plots the trends in affect (emotions), calculated as the difference of thermometer scores toward blacks and whites. The two lines represent the mean scores, ranging from -100 to +100, with positive scores indicating more positive feelings toward people within the same group and negative feelings toward one’s out-group. The trend clearly shows decreasing, not increasing polarization, with both blacks and whites becoming more evenly balanced over time in their affect, declining from 25 points for both groups in 1964 to about 10–15 points in the 1980s. Since 1996 racial polarization has been historically low at 3–14 points. 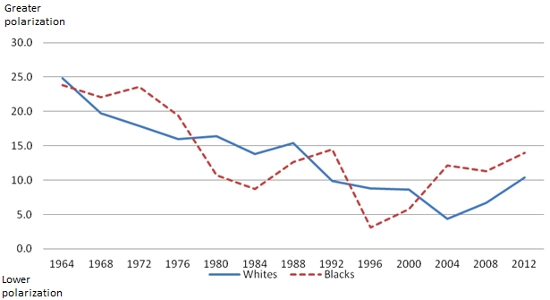 Although feelings toward blacks and whites are no longer sharply polarized, racial affect might still exacerbate party polarization if these feelings increasingly affect party identification. However, as Figure 2 shows, the trend in the relationship between racial affect and partisanship since 1964 provides little evidence of racial polarization. The correlation is generally steady among blacks, with a slight increase in 2012 to a still-low 0.18. Among whites, the correlation indicates a slight shift from Democratic to Republican identification over the half-century, but the magnitude of the correlations is small (0.11 in 2012).  By contrast, correlations between an ideological polarization thermometer of liberals and conservatives and party identification rose from .33 in 1972 to .59 in 2004.  Clearly blacks’ and whites’ favoritism toward their own groups is moderate, and what favoritism exists is only weakly related to the groups’ partisanship. 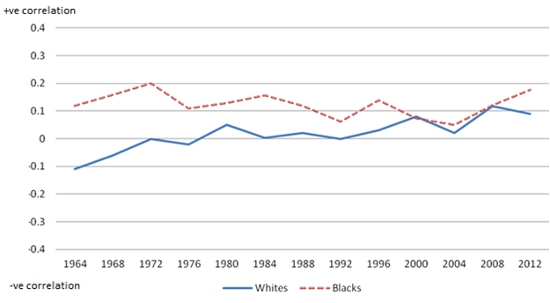 Assessing polarization by class, gender, and age is more difficult due to gaps in the ANES data.  Nonetheless, all three cleavages follow a similar pattern of low-to-no polarization.   For example, in Figure 3 both working-class and middle-class respondents have very positive feelings toward the middle class for those years in which there is data, 1972-1984 and 2004-2012 (and similar feelings toward the working class in years in which there is data).  This data also shows correlations below .10 over the 40 years, even during the recent controversies over income stagnation and inequality. 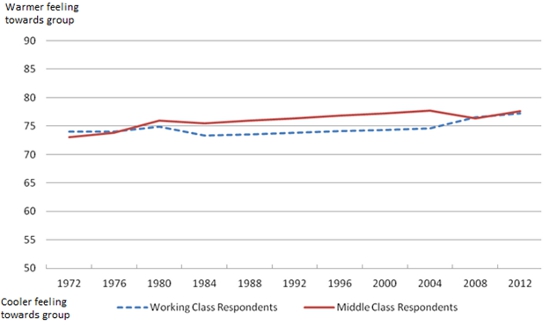 For age, the story is similar.  As Figure 4 shows, both young and old feel warmly toward the elderly (and toward young people when the question was asked).  The correlation of affect and partisanship ranges from -.02 to -.16, indicating that warmth toward the elderly is linked to democratic identification. Polarization by either measure has not increased. 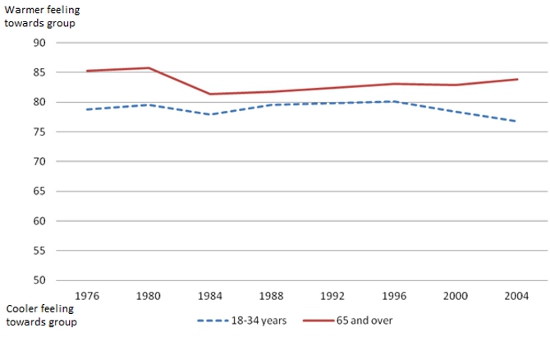 Gender differences in feelings toward women follow the same pattern: positive affect among both groups and no strong link to partisanship.   Thus, among the four cleavages of race, class, age, and gender, there is no strong or recent polarization in terms of group affect and partisan identification. 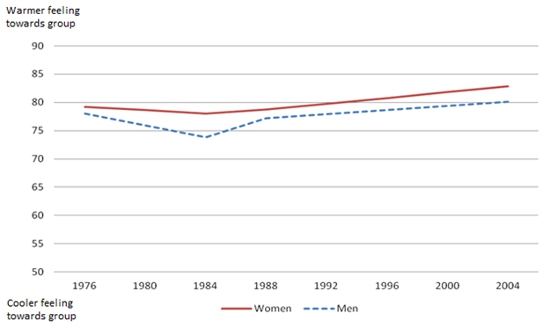 Religion presents a more complicated story, in part because measuring religious affiliation is multifaceted, and partly because the ANES changed its religious affiliation measures several times from 1964-2012.  The 2008 and 2012 measures are especially problematic, and no definitive conclusions can be drawn about those years.

With this caveat, the data show both Protestants and Catholics, the two largest religious affiliations in the U.S, expressing positive affect toward Protestants, Catholics, Jews, and Fundamentalist Christians (although Catholics rate Fundamentalists only around 50 degrees).  Correlations between favorability and partisanship are low, ranging from -.10 to +.10.  The lone exception is the correlation between affect toward Fundamentalist Christians and partisanship, shown in Figure 6, which rose above .10 in 2004 and 2008 – but this was only among Protestants, and the correlation dropped again in 2012.

At first glance these results appear to contradict an emerging scholarly consensus that Americans’ ideological and issue positions are becoming “sorted” into increasingly rigid party groups, and that issues tapping “cultural” values such as traditionalism are playing a greater role in voting.

In fact, my findings both complement prior research and serve as a corrective to fears of a culture war and polarization.  The apparent contradiction in results is due to the way culture is defined:  in terms of values and issue positions in previous research and in terms of the emotions of and toward social groups in my work.  My analysis reveals that “sorting” at the level of party and voting, has not extended to undermining the social foundations of politics.  While social groups may strongly differ on issues, including value-laden issues such as same-sex marriage, group  differences remain at the level of policy and do not extend to direct animosity and the injection of animosity into the party system, which might exacerbate the likelihood of  a culture war. Though partisan leaders in Congress, campaigns, interest groups, and media may issue calls to arms to “culture warriors,” the mass public has not adopted the role of troops taking up arms against one another.

This article is based on the paper “Reframing Polarization: Social Groups and “Culture Wars”, in Political Science and Politics.