In less than a month’s time, voters in Colorado will go to the polls to decide whether or not they wish to give their incumbent Senator, Democrat Mark Udall, another term, or instead, opt for his Republican challenger, Cory Gardner. Courtenay Daum takes a close look at what is proving to be a very close election race and one that might well decide which party controls the Senate. She writes that low ratings for President Obama and the fact that 2014 is an off year election may work against Udall, but that Gardner is also trailing in fundraising.  She argues that the race may well come down to which candidate is best able to get the vote out, especially among core supporters and independents.

Colorado’s Senate race between Democratic incumbent Mark Udall and Republican challenger Cory Gardner is one of the closest in the nation. Recent polls indicate that Gardner may have a slight advantage but the race remains too competitive to make any definitive predictions.  The Colorado Senate race should be of interest for two significant reasons.  First, party control of the U.S. Senate will be decided by the outcome of this and a handful of other close Senate races.  Considering that Republicans are unlikely to lose majority control of the U.S. House of Representatives, a Gardner victory in Colorado could be instrumental in giving Republicans control of both houses of Congress.  Second, the competitive Udall-Gardner Senate race (as well as the closely contested Colorado gubernatorial contest between incumbent Democrat John Hickenlooper and Republican Bob Beauprez) is indicative of the fluid nature of Colorado politics in the twenty-first century and may tell us much about the future of U.S. politics.  As a “purple” state Colorado is a testing ground for various political strategies and the outcome of the 2014 Senate race may inform Republican and Democratic tactics in future elections.

As residents of Colorado are well aware, the candidates, the major parties and a plethora of outside groups are focusing abundant resources on the Udall-Gardner Senate race.  This attention reflects both the national significance of the race as well as the internal battle over the future of Colorado politics.  To date, the two candidates have together raised nearly nineteen million dollars ranking this race the sixth most expensive out of 36 this midterm election.  In addition, outside groups have spent nearly thirty million dollars on the Udall-Gardner race which ranks the state second in outside group expenditures in Senate races this election cycle.  The bulk of this money is being spent on advertising to generate enthusiasm among core supporters and get these voters to the polls.  The fact that Udall had nearly six million dollars to Gardner’s nearly three and a half million dollars at the end of June (third quarter fundraising figures have still not been publicly reported) suggests that the incumbent may have an advantage in the last month of the campaign but the current electoral environment is clearly less hospitable to Udall than 2008.

In 2008’s competitive open seat election, Udall defeated Republican Bob Shaffer with 53 percent of the votes cast and likely benefitted from the national wave of support for Democrats. In particular, in 2008, Democrats in Colorado benefitted from the fact that it was a presidential election year with a strong Democratic candidate for president on the ballot.  As a candidate, Obama visited Colorado multiple times and received the Democratic Party’s nomination at the national convention held in Denver and he went on the become the second Democratic candidate for president since 1964 (Bill Clinton was the first in 1992) to win the popular vote in Colorado when he received nearly 54 percent of the votes cast.  By comparison, the current election cycle is much less hospitable for Democrats.  To begin, the 2014 elections are midterm elections which tend to have lower turnout rates than presidential election years and Udall will not reap the benefits of a popular Democratic presidential candidate driving Democrats to the polls in November.  In fact, President Obama’s low approval rating in Colorado—in the first half of 2014 approximately 55 percent of Coloradans disapproved of his job performance—may work to Udall’s detriment if Colorado voters associate him with the President.  Despite his greater financial resources and incumbent status, Udall’s campaign has struggled to pull away from Gardner in recent weeks. 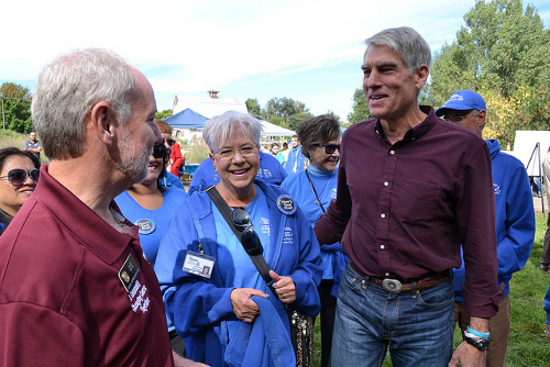 In a race that is likely to be decided by turnout among a few core groups of voters, both Udall and Gardner have been strategically targeting different groups of supporters to guarantee that they vote in the election.  To that end, Gardner has been working to connect Udall to President Obama in order to capitalize on the latter’s low approval ratings among Colorado voters.  He has repeatedly identified Udall as synonymous with Obama claiming in a campaign ad that “Udall votes with Obama 99 percent of the time”.  Similarly, recognizing that a majority of Coloradans believe the Affordable Care Act has been bad for Colorado Gardner has stated that Udall “passed Obamacare with his vote”.  Meanwhile, Udall has been targeting female voters recognizing that it is essential to turnout this group for a Democratic victory in a state where 46 percent of women identify as Democrats compared to 37 percent for Republicans.  As such, reproductive rights have increasingly become a focal point of the campaign as exemplified by Udall and Gardner’s dueling campaign advertisements on the topic.  Beginning in late spring-early summer, the Udall campaign was running advertisements attacking Gardner for his opposition to women’s reproductive rights and in a commercial released in September Udall attacked Gardner for his support of “harsh anti-abortion laws and a bill to outlaw birth control”.  In response Gardner’s campaign released an advertisement introducing an “over the counter” contraceptive plan in an attempt to moderate the perception that he is a conservative extremist on reproductive rights and abortion due to his repeated support for both state and federal personhood amendments.  By offering a contraceptive plan as opposed to simply avoiding the topic Gardner is hoping to counter the criticism that he is an obstacle to women’s reproductive rights and that this will enhance his appeal among the 13 percent of women who identify as true independents.  If this strategy proves successful it may be something that Republican candidates will consider in future elections across the states.

Interestingly, recognizing how important turnout will be in this election, Democrats worked to mitigate the issue of fracking—horizontal drilling and hydraulic fracturing executed to extract natural gas—in advance of the election.  Fracking is a contentious political issue in the state of Colorado and the Democratic leadership and populace are divided on the issue with environmentalists strongly opposed to fracking but others including Senator Udall and Governor Hickenlooper more inclined to support natural gas exploration in the state.  Fearing that the two anti-fracking initiatives—one would require that fracking wells be located at least 2,000 feet from community property including schools and hospitals and the second would give local governments the authority to prohibit fracking within their borders—being proposed for the November ballot in Colorado would attract outside resources that would mobilize Republicans, fracture Democrats and alienate independents, Democratic leaders in the state negotiated an agreement to keep the initiatives off of the ballot this fall. 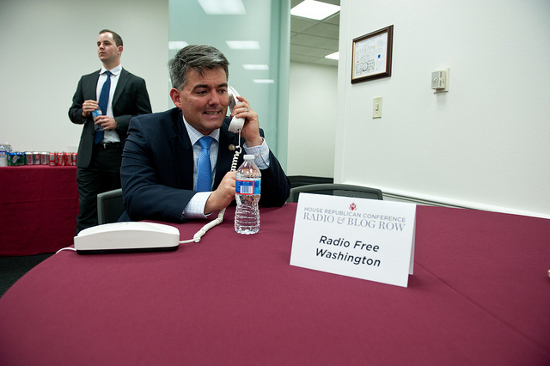 In addition to cultivating their supporters, both campaigns are investing resources in appeals to independent voters.  In Colorado, independent voters constitute a plurality of registered voters outnumbering both registered Democrat and Republican voters.  In 2008, when Mark Udall was elected to his first term in the U.S. Senate, independents comprised a bare plurality of the voters and the Colorado electorate was fairly evenly divided among Democrats, Republicans, and Independents.  In contrast, as of September 2014, the percentage of self-identified Independent active voters has increased at the expense of active registered Democrats. While the increase in the percentage of Independents is marginal—a few percentage points since 2008—given a national electorate that is less hospitable to Democrats this election cycle and the volatile political environment in the state of Colorado, this marginal shift may prove to be instrumental in November.

Despite Gardner’s lead in recent polls, this contest is likely to come down to the wire as both candidates exhaust their resources to mobilize voters and get them to the polls.  Due to the fact that Colorado allows voters to vote by mail beginning in mid-October, both campaigns will be able to keep track of which voters have completed and submitted their ballots.  Given the highly competitive nature of this Senate race, both campaigns will be working to turn voters out until the polls close on November 4 and it is possible that this race will be decided by the last few days of on the ground voter mobilization.  In the end, the campaign that has the better get out the vote operation will likely prove victorious.