Those who are detained or have their supervision revoked before trial are more likely to go to prison, and for longer periods.

Those who are detained or have their supervision revoked before trial are more likely to go to prison, and for longer periods.

Those who encounter the court system are guaranteed equal treatment under the Constitution, but is this always the case? Does being detained before trial affect a person’s likelihood of going to prison?  In new research that examines the cases of more than 90,000 federal defendants, James C. Oleson and his colleagues find that those released before trial were far less likely to be sent to prison if convicted, and if they were, for far shorter periods than those who were not released or who had their pretrial supervision revoked. He argues that this sort of sentencing disparity should be of interest to federal prosecutors and judges alike.

The United States of America has the highest reported rate of incarceration in the world, imprisoning citizens at a rate that is five to ten times that of other Western industrialized nations. In 2009, the Pew Center on the States reported that one in 31 adult U.S. citizens was either incarcerated or under community supervision. Mass incarceration of this kind is imposed at great financial and social cost.It costs between $21,006 USD (minimum security) and $33,930 USD (high security) to incarcerate each federal prisoner each year. With now more than 218,000 prisoners in federal Bureau of Prisons custody, serving average sentences of nearly four and a half years, the fiscal costs are immense. The financial burdens of mass incarceration are paralleled by very real social costs, affecting individuals, families, and communities. Beyond the immediate harm to prisoners and their families, mass incarceration can cripple already-disadvantaged neighborhoods. Accordingly, understanding the variables that influence judicial sentencing decisions is of great importance to public policy.

Although legal variables such as offense severity and criminal history appear to be most influential in judges’ sentencing decisions, extralegal factors such as race, gender, and age also influence sentencing outcomes. Whether a defendant is released from custody before trial can also influence sentencing. Fifty years ago, the Vera Foundation studied 3,000 felony defendants in New York and concluded that the individuals detained before trial were significantly more likely to be convicted and incarcerated.Most subsequent studies of pretrial detention and sentencing have also associated pretrial release (often on bail) with desirable sentencing outcomes while pretrial detention is significantly and positively related to conviction, incarceration, and sentence length.In light of these findings, we asked whether detention before trial would influence the likelihood of imprisonment and/or the length of imprisonment in the United States federal district courts.

Using nationwide fiscal year 2011 data, we followed 90,000 federal defendants from indictment through to sentencing; we controlled for offense, criminal history, and relevant variables (pretrial factors, defendant demographics, and legally relevant factors); and we measured the effects of pretrial detention and the revocation of pretrial release on subsequent sentencing decisions. We analyzed the data using two hierarchical models, allowing us to control for the effects of defendants who were nested within 819 different judges’ courtrooms, which were in turn nested within 92 judicial districts. Using a hierarchical logistic regression model, we asked whether pretrial release and pretrial revocation affected the defendants’ likelihood of receiving a prison sentence.Then, using a hierarchical Poisson model with correction for overdispersion, we predicted sentence length in years. 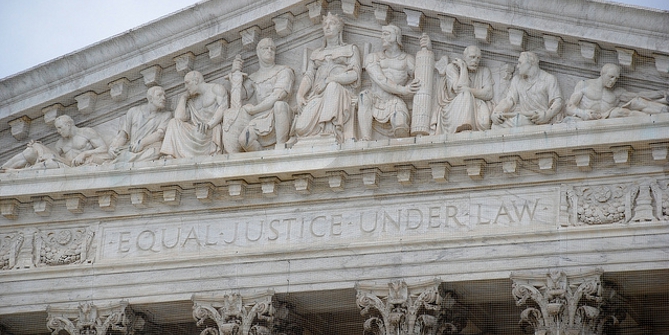 Our research indicates that federal defendants who are detained or who have their pretrial services supervision revoked are more likely to go to prison and to serve a longer sentence there. Detention itself, above and beyond legal or other extralegal variables, increases this likelihood. The promise of “equal justice under law” is emblazoned upon the west pediment of the United States Supreme Court building, but pretrial detention appears to beget post-conviction detention. This is not the racial disparity that fuels so much of the fire in contemporary sentencing policy; nevertheless, systematic sentencing disparity of this kind should be of interest to all federal prosecutors, defense counsel, judges, and other stakeholders. If researchers can identify the variables that drive federal sentencing decisions, allowing judges to make evidence-based sentencing judgments, resources can be diverted from being concentrated where they are useless—or even inadvisable—to where they will do the most good.

This article is based on the paper, “The Sentencing Consequences of Federal Pretrial Supervision,” in Crime & Delinquency.