After President Obama entered office in 2009, his administration launched a ‘reset’ of relations with Russia, with the aim of forming stable and cooperative relationship. Ruth Deyermond writes that the collapse in relations between the two countries following the Russian annexation of Crimea, and Russian military involvement in the Eastern Ukrainian conflict, is precisely what the reset was designed to prevent. She argues that the previous cooperation between Russia and the USA had been on matters of limited importance to both countries. This, combined with weak economic ties, and a lack of common values has made the relationship vulnerable to shocks such as Ukraine, and acts as block to re-establishing meaningful cooperation in the future.

Despite a serious effort by the Obama administration to permanently ‘reset’ the relationship with Russia, the crisis in Ukraine has pushed relations between Washington and Moscow to their lowest level for nearly 30 years, with no obvious route back. How has it come to this, when both states appeared committed to a different relationship?

When the Obama administration launched a reset of relations with Russia as its first major foreign policy initiative in 2009, it signalled an intention to stabilise one of the most turbulent relationships in the post-Cold War period. Over the last quarter of a century, US-Russia relations have swung between periods of cooperation and alignment, through relative neglect, into hostility, and back again. Earlier low points such as the Kosovo conflict in 1999 and the 2008 Russia-Georgia war, when the George W. Bush administration had contemplated military involvement in support of Georgia, demonstrated the need for a stable, cooperative relationship between the US and Russia both for the sake of global security and to facilitate the US’s foreign policy agenda which Russia – as a permanent member of the United Nations Security Council and a key security player in the European and Central Asian regions – had the ability to disrupt significantly.

Attempts by previous administrations to improve the relationship had been both short-lived (neglected when other, more immediate, priorities surfaced) and based on unrealistic claims of shared values. In 2002, for example, George W. Bush had declared that  ‘’the partnership of America and Russia will continue to grow, based on the foundation of freedom and […] democratic values we hold dear’; within a few years, actions such as the Russian government’s crackdown on foreign NGOs and Russian military action in Georgia made this unthinkable.

The Obama administration appeared to dodge both these problems by grounding the reset in a pragmatic outlook rather than an idealistic one, and attempting to build long-term stability into the relationship through the creation of a structure, the Bilateral Presidential Commission (BPC), that would establish a web of bureaucratic linkages giving predictability to the relationship. Despite attacks by domestic critics who saw it as a concession to a neo-Soviet aggressor, the reset appeared to succeed in advancing US foreign policy in areas such as sanctions against Iran, to move forward areas of mutual interest such as arms control, and to create a stable relationship.

The first significant problems seemed to appear with the dispute over possible action in Syria and the friction resulting from US condemnation of Russian governmental action against election-related protests in late 2011 and early 2012. Neither, however, presented the same order of problem as the crisis in Ukraine. Although the response of the Obama administration was initially measured (with Secretary of State John Kerry stressing on a visit to Kiev that they recognised Russia’s ‘legitimate interests in Ukraine’), the Russian annexation of Crimea and Russian military involvement in the Eastern Ukrainian conflict with the new government in Kiev have produced the most severe response by a US administration to any Russian action since the end of the Cold War, including  sanctions and the suspension of the BPC. At the same time, Obama has approved US assistance for the Ukrainian government, including military equipment and training. This collapse in relations is precisely what the reset was designed, largely, to prevent, and it raises the questions of why has this happened and how US-Russia relations can be improved. 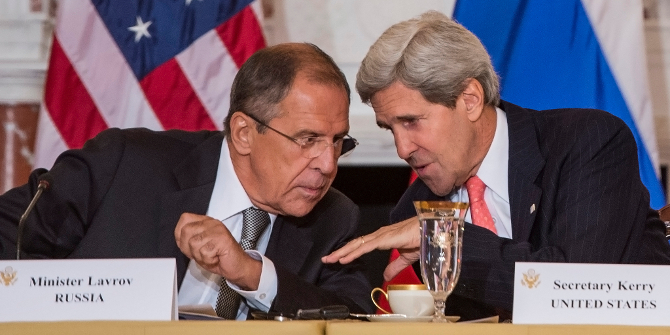 The deterioration in US-Russia relations is connected to several aspects of the contemporary international system and American and Russian perceptions of their own roles in it. The first of these is the friction deriving from their relative positions as global leader and as a second tier power with differing worldviews. The liberal ideology central to US hegemony is one major source of friction because US leadership on humanitarian issues and democracy promotion is assumed by Russia to be directed towards expanding and sustaining US dominance. This is understood to be threatening to the leadership of a profoundly realist, second tier state like Russia – particularly one with its own reasons to be concerned about the possible effects of external engagement in its domestic politics. The reset appeared to moderate these concerns but since the intervention in Libya – which was not opposed by Russia but on which the Russian government has said it was misled – it has become increasingly clear that the Russian government views the Obama administration as prone to hegemonic expansionism under the cover of normative global leadership, just as it thinks the George W. Bush administration was before it. This was a key factor in Russian opposition to intervention in Syria.

This friction is particularly acute in the region of the former Soviet Union, where the US and Russia have fundamentally different interests and objectives. As the global leader with continuing commitments to states such as Georgia; to the principle of democracy promotion; and to the extension of NATO membership (under the right conditions), the US has remained a significant political presence in the region even if less engaged than during the Bush presidency. For the Russian government, this is further evidence of attempts by the US to extend its influence in order to shore up its status as the world’s dominant state, and to undermine Russia.

This is a particular problem for Russia because one of the pillars of its great power identity (an existential matter for the Russian political elite) is its position as the dominant regional power. Activities in support of democracy promotion and the encouragement of regional engagement with Western institutions are interpreted as attempts to attack or weaken Russia and strengthen the US. Even the development of relations between states such as Ukraine and an entirely European organisation, the EU, was seen as an attempt by the US’s closest allies to advance US interests by weakening Russia.

Combined with these positional obstacles to improved relations is the fact that, arms control aside, cooperation has always been on matters of limited importance to both states. Economic ties have always been weak, and the US and Russia lack common political values or a shared worldview. Cooperation on low-level issues initiated through the BPC is trivial to both states compared with the importance of the issues over which disagreement has emerged, and the capacity of shared structures to build up trust has proved weak where cooperative ties are so thin.

All of these factors render the relationship highly vulnerable to external shocks, such as the Syria crises and the Ukrainian protests starting in late 2013. Well-grounded bilateral relations, embedded in institutions and made up of multiple ties on issues of importance to both states would arguably be able to deal with this type of crisis more effectively, even where states did not share worldview or interests. US-Russia relations lack these supporting conditions and seem unlikely to develop them.

These factors are also significant blocks to re-establishing sustained cooperative, or even non-confrontational, relations in the longer term. They indicate, in other words, that a future reset will be very hard and, in the absence of significant changes to the foreign policy outlook of both states, likely to be destabilised easily by future shocks. Previous attempts to found bilateral relations on shared values or interests failed because they were unrealistic about the structural and other obstacles in their path. The reset was the Obama administration’s best shot at stabilising US-Russia relations, and it failed to do this despite pragmatic and positive engagement on both sides. It will require a renewed belief in both states that sustained, mutually beneficial cooperation is possible and desirable if relations are to improve; in the current climate, this appears unlikely.