Kentucky’s Senate race has so far been a hard fought one, with Democrat Alison Lundergan Grimes hoping to unseat the current Senate Minority Leader, Mitch McConnell. Despite McConnell’s relative low popularity ratings, Anne Cizmar argues that Grimes faces an uphill battle, having already had to distance herself from President Obama. She writes that barring a shake up to the campaign, McConnell looks on course to win a race which may see more than $100 million spent between the two candidates.

Unseating a U.S. Senator is a steep uphill battle.

Since the Carter-Reagan election of 1980, a full 75 percent of Senate incumbents have survived their six-yearly appearance on the ballot, with 91 percent winning reelection in 2012.

The incumbent’s popularity isn’t always an indicator of trouble—good news for Kentucky’s Mitch McConnell who seems likely to win his hard-fought battle with Alison Lundergan Grimes despite his Obama-low job approval ratings.

McConnell, a Republican and 30-year incumbent, is the current Senate Minority Leader. He’s not well liked in Kentucky polling at around 34 percent job approval in the state. But the state is increasingly Republican; 5 out of 6 House of Representatives members from Kentucky are now from the GOP, and Kentucky has voted for the Republican presidential candidate in every election since 1996. As a result, most recent polls indicate he’s poised for victory, despite a competitive race against a strong Democratic challenger currently holding statewide office.

Grimes is new to the national stage, but a longtime player in Kentucky politics. Her father is a well-known former Democratic politician and close Clinton ally who owns the catering company responsible for serving food at the Kentucky Derby and Indianapolis 500. He’s aided his daughter with connections and campaign experience. She has some of her own, currently serving as Kentucky’s Secretary of State after winning more than 60 percent of the vote in 2011, the highest vote share of any statewide candidate. 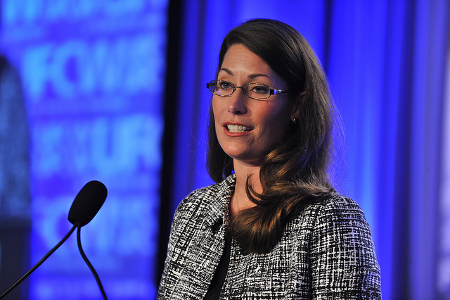 Grimes started her campaign with a strong showing at Fancy Farm, the picnic in southwestern Kentucky where the state’s political candidates launch their campaigns in early August. The picnic has been hosted since 1880 by St. Jerome’s Catholic Church in a town of 458, and is unique because candidates address partisans from both sides, shrugging off jeers while stoking supporters. Grimes delivered a populism-tinted stump speech centered on the theme that “Mitch McConnell doesn’t care” about working people, women or seniors.

In person, Grimes is polished, articulate and confident. She looks the part, and as a 30-something woman, she resonates with various audiences from coal miners to college students. She has also been aided by party elites, including Bill Clinton who has appeared with her at a number of campaign stops around Kentucky.

The race is expected to be the most expensive Senate campaign in U.S. history—a statistic that’s even more impressive considering the state has less than half the population of neighboring Ohio. Some estimates expect to see more than $100 million will be spent between the two sides, about $22 per head for every man, woman and child in the state. The race has garnered attention from across the nation, and money has been flowing in to both campaigns from around the country. Both campaigns have been criticized for their source of campaign donations.

Political junkies, pundits, and the parties have been rapt, partly because McConnell is the Senate Minority Leader, and unseating him would be a morale booster for the Democratic Party. This race is also key to Republican aspirations to seize control of the Senate in these elections, further isolating President Obama from Congress. If Republicans control both the House and Senate, Obama stands little chance of passing legislation in the last two years of his presidency. He’d also have a difficult time confirming appointees because of the constitutional provision requiring Senate approval. 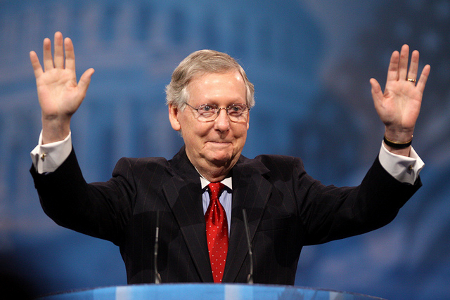 A local poll conducted by The Courier-Journal has Grimes 2 points ahead of McConnell. But polls by Fox News, CBS/New York Times, and Reuters have McConnell ahead by 4 to 6 points. Part of Grimes’s troubles revolves around President Obama’s low popularity ratings in Kentucky. McConnell has linked her to Obama starting back at Fancy Farm. Grimes has tried to separate herself from the unpopular president by referring to herself as a “Clinton Democrat,” associating herself with the former president who won the state’s eight electoral votes in both 1992 and 1996. In a recent ad, Grimes declares, “I am not Barack Obama. I disagree with him on guns, coal and the EPA”), as she shoots skeet in a Kentucky field.

This has been a rugged campaign, and both candidates are fighting to the end. Barring a shakeup in the campaign, the most recent polls—not to mention the historical trends—suggest “Team Mitch” will prevail over “Team Switch.”