With demographic change continuing in America, both the Republican and Democratic Parties have embarked on strategies to diversify their pool of candidates in order to attract a greater share of the minority vote. Using data from Congressional elections, Christopher Stout looks at the success of this strategy. He finds that blacks in districts with Democratic candidates are more likely to identify with the Democratic Party whether their candidates succeed or fail, but only identify with the Republican Party if the candidate is successful. He writes that while blacks respond positively to candidates of the same race on the ballot, this does not hold for Latinos and Latino candidates.

Both political candidates and pundits have long suggested that political parties can draw the support of blacks and Latinos through the nomination of minority candidates. For example,  2012 U.S. Republican Presidential candidate Herman Cain asserted in a mailer “as a descendent of slaves I can lead the Republican Party to victory by garnering a large share of the black vote…” Similarly, Former Housing and Urban Development Secretary and Mayor of San Antonio Henry Cisneros warned that if the Democratic Party does not diversify their candidate pool they could lose the support of young Latinos, “…because many young Latinos will say, ‘ [If] I want to advance in politics, it looks like the Republicans offer a route’ ”. Given these statements, it is not surprising that both the Democratic and Republican Parties are making concerted efforts to diversify their pool of candidates. This becomes even more imperative as the demographics of the United States shift and the nation grows more diverse.

In recent research, Jennifer R. Garcia and I empirically assess whether this strategy works. Based on previous research showing that blacks and Latinos have a strong preference to be represented by someone who shares their race/ethnicity, we argue that both Democrats and Republicans can improve their standing in minority communities through the nomination of underrepresented candidates. We believe, however, that this effect will be contingent on two factors: minorities’ perceptions of the party and the candidate’s viability. For the former, we argue that the Democratic Party’s nomination of black and Latino candidates should yield greater increases in co-racial/ethnic Democratic partisans. Minority voters tend to be ideologically closer with the Democratic Party, but they often fear that their vote is being taken for granted. The nomination of minority Democratic candidates may help alleviate concerns that the Party is ignoring their vote.

Republicans on the other hand, due to their recent history of racial animus and perceived hostility have to make stronger efforts to improve their standing amongst blacks and Latinos by nominating credible candidates. The mere nomination of an unviable black or Latino candidate, we suspect, would not be enough to bring reluctant blacks and Latinos into the Republican Party. As a result, we expect that the nomination of unsuccessful minority Republican candidates will do little to alter minority partisanship.

The results of our analysis presented in Figure 1 largely show that co-racial candidates play a significant role in influencing black partisanship. Blacks in districts with black Democratic candidates who succeed or fail are significantly more likely to identify with the Democratic Party than blacks in districts with no co-racial candidates on the ballot. Surprisingly, blacks in districts with black Democratic candidates who fail tend to be the most Democratic. We attribute this result to the fact that most unsuccessful black Democrats are nominated in majority white districts. As a result, the nomination of a black candidate in such context may lead voters to believe that the Party is nominating black candidates beyond safe majority-minority districts. The results in Figure 1 also show that blacks are more likely to identify with the Republican Party in districts where the Party nominates a successful candidate. However, the nomination of a black Republican candidate who ultimately loses does not lead blacks to identify more with the Republican Party. As a result, it appears that the nomination of a non-credible Republican candidate does little to sway black partisanship. 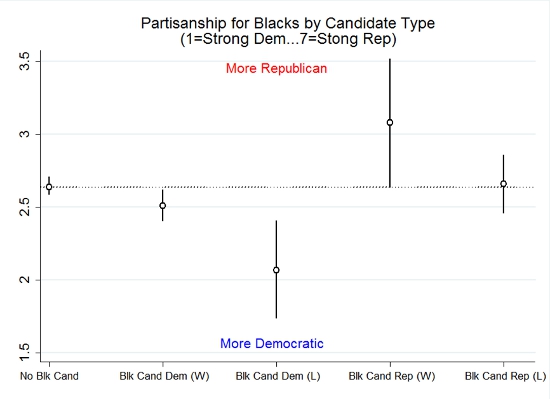 Figure 2 presents the levels of Democratic partisanship among blacks from the 1972-2012 American National Election Studies. The red line in the graph dilineates the Pre- and Post-Obama era. The graph show that blacks became more likely to identify with the Democratic Party after Obama’s successful bids for the White House. Additional analysis shown in the Supplemental Appendix demonstrates that this move to the Democratic Party is shaped more by warm feelings toward Democrats rather than percieved hostility from Republicans. 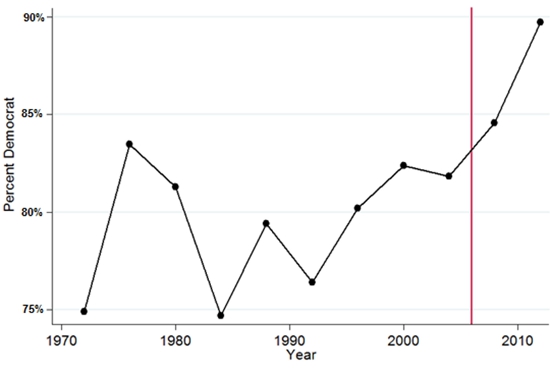 While blacks largely respond positively to the presence of candidates of the same race on the ballot, the results presented in Figure 3 show that Latino partisanship does not appear to be influenced by Latino candidates. Latinos did not have significantly different levels of Democratic or Republican Partisanship in any of the district types that we assessed. While we don’t find that Latinos respond to descriptive candidates, we offer several disclaimers. First, the data we use lacks a national origin measure and this may lead us to erroneously disregard the importance of descriptive candidates in shaping partisanship for Latinos. Second, our study examined the dyadic relationship between voters and co-ethnic candidates. While a descriptive candidate in isolation may not lead to changes in partisanship for Latinos, a collective growth in the party’s diversity may be  imporant to Latino voters. As a result, we hope that future research continues to examine the link between descriptive candidates and party identification. Nonetheless, the results indicate that both the Democratic and Republican Party can improve their standing amongst minorities by nominating credible underrepresented candidates. 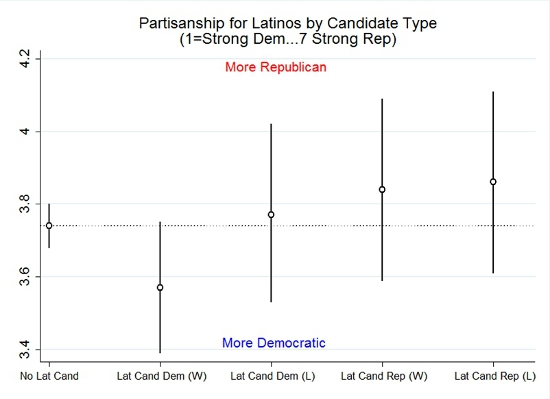 This article is based on the paper, ‘The Big Tent Effect: Descriptive Candidates and Black and Latino Political Partisanship’, in American Politics Research.