Many theories have been put forward to explain the economic successes of South Korea and Taiwan in the latter half of the 20th century. In new research, Kevin Gray attributes much of this success to U.S. aid, which, he argues, did not take place on a blank slate. Rather, it built on the already considerable state capacity created by Japan’s colonial bureaucracy. Aid to South Vietnam, on the other hand was far less effective due to the fragile legacy of French colonialism, and the failure of land reform which fuelled the domestic insurgency and led to a greater U.S. focus on military aims compared to development.

One question that has challenged policymakers has been that of how to reproduce the extraordinary developmental experiences of the East Asian “tigers” of South Korea throughout the global south. Much of the debate surrounding the causes of their rapid economic rise had focused on the relative roles of interventionist governments versus the invisible hand of the market. Others, however, have argued that it is no coincidence that, as US allies on the front line of the Cold War divide in Asia, they received amongst the highest levels of US economic and military aid anywhere in the world.

Indeed, between 1946 and 1975 obligations for economic and military aid to South Korea and Taiwan were $69 billion and just under $42 billion respectively. To put this into perspective, the whole of Latin America and the Caribbean received nearly $69 billion during the same period. Given these high levels, the question of the causes of South Korea and Taiwan’s extraordinary economic successes becomes considerably easier to answer.

There is one problem with this explanation, however. US aid to the developmental failure that was South Vietnam exceeded even that of even South Korea and Taiwan, amounting to a total of $115 billion between 1954 and 1975, as Figure 1 shows. Of course, an intuitive answer to this anomaly is that the Vietnam War prevented any genuine process of development taking place. 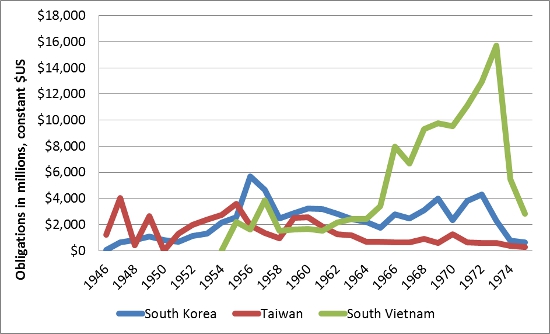 However, in 1945, South Korea and Taiwan were similarly divided and fragile states faced both by hostile communist neighbours to the north vying for legitimacy and unification, and by significant social unrest and resistance to within. South Vietnam’s descent into internal insurrection and war does not therefore in itself explain the divergence among the three countries but is itself rather the phenomenon that needs to be explained.

In recent research, I argue that US aid did not in fact take place on a blank slate, so to speak. By the time of their independence from Japan, South Korea and Taiwan already possessed considerable state capacity and autonomy from their respective societies. Whilst Japanese colonialism was highly exploitative, the geopolitical proximity of Japan to its colonies led to greater investment and nascent industrialisation with the emergence of powerful colonial bureaucracies. In this sense, the Japanese colonial division of labour differed significantly from the typical Western colonial pattern.

Furthermore, following independence, the US played a key role in bolstering the capacity of the post-colonial South Korean and Taiwanese states to deal with their internal and external threats. U.S.-sponsored land reform was significant here in defusing rural tensions and in establishing a more promising basis for economic development in South Korea and Taiwan. The United States also used aid as an inducement for South Korea and Taiwan to shift away from import-substitution policies and reintegrate into the Japan-centred regional economy as part of a broader export drive based on US consumer demand.

In comparison to Japan’s imperial project, French colonialism in Indochina bequeathed a weak fragile state that was largely incapable of establishing its authority either before or after decolonization in 1954. French colonialism in Vietnam had followed the typical Western pattern in that it was primarily concerned with extraction of agro-mineral resources. Given that the profitability of such resources was largely based on arbitrage, there was little requirement for the establishment of a developmentalist colonial bureaucracy aimed at increasing productivity.

Geographical distance from the imperial metropole also meant that the colonial bureaucracy was small. Indeed, for every French official in Vietnam, there were around fifteen Japanese officials in the Korean bureaucracy. This resulting lack of institutional capacity meant that there the post-colonial state in South Vietnam would be ill-placed to adopt a developmentalist role, and US aid was consequently put to use in an extremely inefficient manner.

Given Vietnam’s lack of colonial industrialisation and the country’s excessive reliance on the exchange earned by agro-mineral exports, the political barriers to land reform in the South were even greater. Though here it is also necessary to cite the lessened appetite for land reform under the Eisenhower administration. South Korea and Taiwan had achieved their independence earlier in 1945, at a time when land reform was more central to US aid policy.

The failure of land reform in South Vietnam thus compounded the state’s weak presence in the countryside, thereby fuelling the domestic insurgency. As a result, U.S. aid to South Vietnam became increasingly focused on immediate goals of pacification and military aims rather than on longer-term developmental aims.

Curiously, however, South Vietnam’s developmental quagmire and the massive U.S.-led war effort in Southeast Asia provided a significant boost to the South Korean and Taiwanese economies. As the US began to phase out aid, the Vietnam War provided a well-timed boost to both the South Korean and Taiwanese economies. South Korea’s direct participation in the war and the massive procurements contracts including large infrastructure projects marked the global rise of Korea’s best known conglomerates.

As can be seen, US aid played a crucial role in the rise of South Korea and Taiwan. Nonetheless, explanatory weight must be given to colonial legacies in explaining divergence with the case of South Vietnam. This same geopolitical contingency later played a role in the re-integration of South Korea and Taiwan into the Japan-centered regional economy. South Vietnam, on the other hand, remained mired by classic conditions of colonial underdevelopment.

As a result, the likelihood that the experiences of South Korea and Taiwan can be reproduced, even with generous levels of foreign aid, seems rather limited.

This article is based on the paper ‘U.S. Aid and Uneven Development in East Asia’, in The Annals of the American Academy of Political and Social Science.