Heading into this week’s midterm elections, the Republican Party has been widely tipped to maintain or increase its seats in the House of Representatives, and to retake the Senate. Yuri Gabriel Beltrán Miranda takes a close look at the role of Latin American voters in these elections, writing that due to their geographic concentration in areas such as Colorado, the Latino vote has little significance for House elections. With this underrepresentation in mind, he argues that the U.S. should consider adopting proportional representation, as its neighbor to the south, Mexico, has done.

In the midst of the storm that threatens to further weaken the Democrats in the House of Representatives and deliver the Senate to the Republican Party, the Latin-American voting population –whose participation in Obama’s victories should not to be overlooked- now seems insufficient to rescue the President’s party, but enough give the Democrats an even bigger headache if they do not turn out on Tuesday. The Democrats, paradoxically, could find answers in the proportional representation system, which is common through Latin America.

This Tuesday will be a busy day for American democracy, with 471 representatives chosen, including 36 senators (three of which are running extraordinary elections), and 435 members of the House.

With the actual integration of the 113th Assembly, the Republican Party leads the House of Representatives with a 223 to 119 composition. The Democrats have a 53 to 45 majority in the Senate. However, as Figure 1 shows, recent predictions clearly suggest that the GOP will benefit more from these midterms. 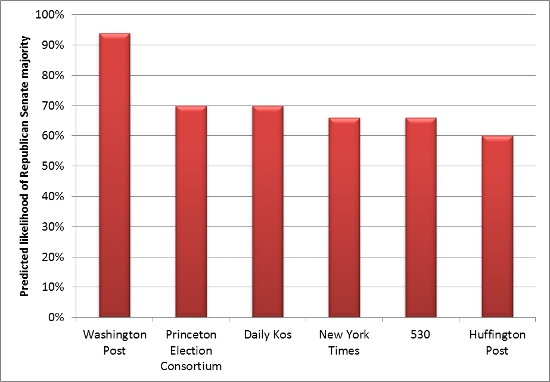 Note:The idea behind this figure  comes from the New York Times, but the present version was adapted to fit the purpose of this article. All sources were consulted on 23 October 2014, between 13 hrs and 15 hrs, GTM-7.

Given that both parties see midterms as a waiting room for the presidential run, tension is rising.

The “Hispanic” vote is much more powerful for presidential elections than for midterms. It has, for its geographic characteristics, low interference in the makeup of the House. The reason is that, as Figure 2 shows, with 15 percent electors from “Hispanic origin”, only Colorado has a population of Latin-Americans that could be of any significance for elections.

Figure 2 – “Hispanic”  voters in the States which have competitive elections 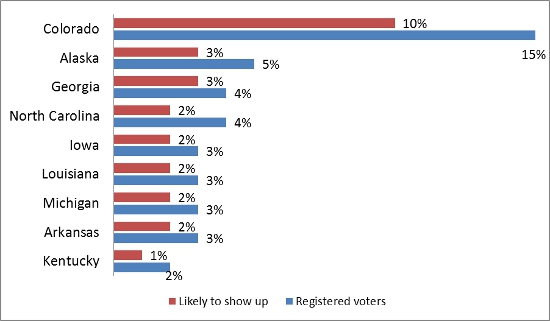 Note: The graph is original work by Nate Cohn, from The New York Times. The series: “Registered voters”, represents “Hispanic” voters inscribed in the electoral lists; the series “Likely to show up” is an estimate of the percentage of “Hispanic” electors that are actually expected to show up.

“Hispanic” electors have a significantly lower participation ratio than other groups of voters, particularly for the midterms.

At a district level, “Hispanic” political muscle is even more diluted: Latin-Americans tend to concentrate geographically; half of all voters in this category live in 65 of the 435 districts in which US territory is divided. With current district geography, their political strength is poorly exploited: it is excessive in some territories, and scarce in many others.

The table will not be easily turned: where “Hispanics” hold power nowadays, Republicans have already a great deal of political opportunity. In these areas, the GOP has not much more to lose. This is the reason for which right-wingers are not flinching in the face of this week’s elections. It is also the cause for them to be likely to gain majority over the entire House. Nevertheless it is possible that the majority will not be decided this year: if Louisiana or Georgia’s senatorial candidates go to runoffs, these will take place on 6 December and 6 January, respectively, the latter three days after the 114th Congress of the United States is sworn in office.

Democrats, on the other hand, could face severe consequences if they fail to compel their Latin-American sympathizers to show up on Election Day. “Hispanic” absenteeism, however, is not as powerful as it will be in five years time, when the group is expected to have grown by 25 million.

A representation system that does not deliver

In spite of those amongst the DNC who blame Obama’s Affordable Care Act (“Obamacare”) as the cause of a likely defeat, the reason behind it might be an electoral system that does no longer satisfy the peculiarities of the political system that it serves. In 2012 Democrats won only 46 percent of the seats, in spite of having obtained a larger amount of the total votes than the GOP. This can either be explained by the high urban concentration of DNC supporters, or by the artificial manipulation of district geography (Gerrymandering) amongst the most competitive constituencies of the US.

For instance, along the southern parts of the U.S., where “Hispanic” concentration is higher on a strip parallel to the Mexican border, electoral districts have been drawn in a vertical rectangular fashion that divides the Latin-American population. Such is the case in Arizona’s 1st and 4th districts.

In the U.S., a large number of regions have a clearly defined political tendency, and this allows little chance for real competence and consequently for election. In this light, this seems a good moment to have another look at the idea of proportional representation.

The progressive movement of the early 20th century had already attempted a change; to avoid the local absolutism of nefarious electoral machineries such as Tammany Hall in New York, some intellectuals suggested reforms such as the appointment of a City Manager and the integration of Proportional Representation in the Electoral System. The aim was to lower barriers for electoral competence, while isolating corruption and favoritism.

This is nothing less than the story of a frontal fight against ancient, well-settled power structures. These traditional authorities feel threatened with the opening of new possibilities of dissent. Supporters of Proportional Representation in the U.S. argue that because it works so well to allow newcomers, since 1962 its detractors managed have expelled it from all political competition –except for municipal elections in Cambridge, Massachusetts.

The issue of Latin-American representation implies an interesting challenge: the opportunity to observe the evolution of the U.S. political system through the next century. Initiatives like the one presented by the Republicans last August, to expedite the deportation of children from Central America who migrate without an adult (“Dreamers”), would seem to demonstrate that the political system has not overcome the fear and hostility against minorities, that has been in evidence since the beginning of the 20th century.

This crisis of representation is not exclusive to the Unites States; recently in Mexico, the same party that proposed and approved the inclusion of Proportional Representation during the 1990s, began rallying against it. Electoral authorities will subsequently have the task of providing information to voters on the composition of the electoral system and on the significance of its parts.

This article has also appeared in Spanish at Agenda Publica.

Yuri Gabriel Beltrán Miranda – Electoral Institute of the Federal District, Mexico
Yuri Beltrán Beltran Miranda has a clear vocation for education as for the spread of democratic culture. At the National Autonomous University of Mexico and at the Center for Economic Research and Teaching, the University of Michigan, and other institutions, he has either taught or studied several specialization courses, in order to develop and democratize knowledge about the technical and political parts of electoral systems. Today, asGeneral Council of the Electoral Institute of the Federal District (IEDF), Beltrán performs a daily effort, joint to that of Mexico City, to organize and administer elections and the mechanisms of an increasingly competitive citizen participation.