Airports are a key part of our globalized world, and calls for their expansion and development are becoming increasingly common. But airports can have negative effects on their local areas– air and noise pollution, and traffic congestion. Do airports’ benefits outweigh their costs to local areas? In new research that examines the 25 largest airports in the U.S., Julie Cidell finds that while airports may drive economic activity within a region, more often than not, that activity is occurring outside the vicinity of the airport. She writes that aspects of an airport’s location, such as nearby industry and transport links often serve as job creators, rather than the airport itself.

It is rare to find an article or report about a major US airport that doesn’t describe it as the “economic engine” of its metropolitan region (see Figure 1). Indeed, there are many studies that indicate a positive connection between increasing air traffic capacity or air traffic and the number of firms in a region. Such studies are commonly used to justify airport expansion and the development of an “aerotropolis” or “airport city” through increasing the airport footprint and/or building new runways and terminals, under the logic that the region as a whole will benefit from the expansion. However, breaking down the connection between transportation and economic development across time and/or space can lead to different results. For example, in peripheral European regions, the causality arrow goes from air traffic to economic development, but in core cities, it’s the other way around.

We know that the negative effects of airports—air pollution, noise pollution, labor competition, and traffic congestion—occur at a local scale, within 5-6 miles of the airport boundary. While the argument is often made that “you knew there was an airport there when you moved,” that argument is usually wrong for two reasons: a) many airport-adjacent neighborhoods predate jet aircraft, and b) despite their vast, fixed infrastructure, airports move. For example, a study of Phoenix concluded that it was the airport and its disamenities that moved into residential neighborhoods, not the other way around. Nevertheless, very few studies of the air transportation-economic development relationship are broken down at finer scales to enable an equitable comparison to the negative effects of airports.

That was the purpose of my recent study. I focused on the largest 25 airports in the US and carried out two different kinds of spatial analyses as described below. For both, I found that more often than not, the economic development an airport brings to its region is not only equally spatially clustered as the negative environmental effects, but that development is occurring somewhere other than the vicinity of the airport. In other words, airport neighbors are not sacrificing for the good of the region as a whole, but for other neighborhoods equivalent in size to their own, raising questions of spatial equity regarding facilities that draw on a great deal of government money and yet are not producing benefits region-wide.

Previous studies have argued that airports are significant job generators using a simple methodology: drawing circles of 2.5, 5, and 10 mile radii around the airport, counting the number of jobs within, and comparing that number to the central business district (CBD). I used the same methodology to draw rings around two major pieces of infrastructure found in every US metropolitan area: the largest shopping mall and the largest wastewater treatment plant. I also chose the point in the metropolitan area directly opposite from the airport across the CBD to act as a control. I then compared those numbers to the jobs in the CBD (all data were taken from the 2007 US Economic Census), with the results in Figure 2, below.

Surprisingly, at all distances studied, a wastewater treatment plant is a more important “job generator” than the airport. Is a wastewater treatment plant therefore the “economic engine” of its region? Such a facility generates relatively few jobs, either directly or indirectly. Presumably, this finding does not have to do with the characteristics of the plant itself as a job generator, but with its surroundings. Such plants are often located on major waterways and can be considered a locally unwanted land use much as the airport. For both these reasons, they are likely to be surrounded by industrial land rather than residential. Similarly, of course, one could argue that it is not the airport qua airport that is generating jobs, but rather other features of its immediate location such as ground transportation access—features which potentially could be reproduced in other locations without the hazards of noise and air pollution.

The second part of this study focused on the specific categories of firms that have been shown to be attracted to metropolitan areas by air service—professional and administrative services—and determined their spatial distribution in comparison to the airport. Figure 3 is an example of how the four different spatial analyses look in one metro region, plus the major pieces of infrastructure I discussed earlier.

The weighted mean center analyses of key infrastructure and professional services, indicated that for only 8 of the 25 airports studied (including Phoenix as pictured), that the center is within 5-6 miles of the airport. In other words, for two-thirds of the airports studied, the economic benefits are occurring at a greater distance from the airport than the negative effects. The standard deviational ellipses showed that this distance might not be too far: 76 percent of the airports were within the ellipse, suggesting that even if airports are not in close proximity to the center of airport-related development, they are within one standard deviation of it. However, that distribution might not be even across space. Local and global Moran’s I analyses showed that professional service firms and their associated jobs are clustered in space—but of the 25 airports studied, only 8 were in or adjacent to a “hot spot” of these firms. Six were in a “cold spot.” The airport may be driving economic activity within the region—but more often than not, that activity is occurring outside the vicinity of the airport.

The goal of my research was to empirically explore the frequently-made statement that airports are the “economic engines” of their regions. There are two parts to this: to what extent are airports drivers of local employment as compared to other large pieces of infrastructure, and what is the spatial distribution of the firms brought to a region by its air service? In both cases, I found that the “economic engine” claims are probably overstated, at least when we compare their spatial distribution to the distribution of the airport’s negative effects. Other major pieces of infrastructure such as shopping malls and wastewater treatment plants have as many or more jobs in their vicinity as airports do. The professional services firms that have been shown to be attracted to metropolitan regions are clustered in space rather than being evenly spread throughout the region, and those clusters are more often than not outside the range of where negative environmental and economic effects occur.

Any large piece of infrastructure, whether an airport, a shopping mall, or a wastewater treatment plant, will have positive and negative effects both within the immediate vicinity and across the entire region. Nevertheless, such infrastructure has to be sited somewhere. Taking into account the spatial distribution of that infrastructure’s effects, both positive and negative, can make clearer the questions of who benefits and who pays—as well as what might be done to offset the costs for those who suffer the negative effects of such infrastructure without reaping the economic benefits.

This article is based on the paper ‘The role of major infrastructure in subregional economic development: an empirical study of airports and cities’, in the Journal of Economic Geography.

Julie Cidell – University of Illinois at Urbana-Champaign
Julie Cidell is an associate professor at the University of Illinois at Urbana-Champaign, where her work focuses on two main areas: the political economy of transportation, and green buildings and public policy. She has also worked as a transportation engineer in Boston and taught physical geography in northern and southern California 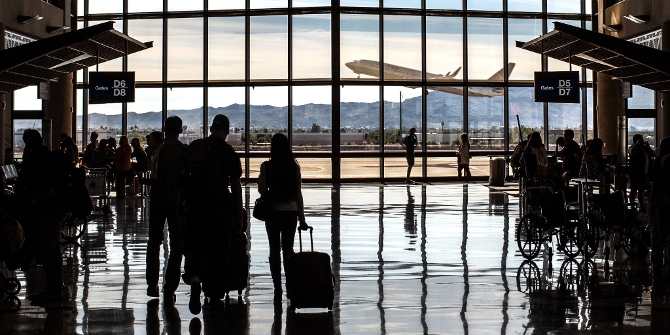