Republicans in Congress and President Obama both have incentives to get things done in the next two years.

Republicans in Congress and President Obama both have incentives to get things done in the next two years.

This week’s midterm elections saw the Republican Party retake the Senate and gain its largest majority in the House in over 60 years. Lori Cox Han writes that the GOP’s success is down to President Obama’s poor approval ratings, anti-incumbency sentiment, low voter turnout, and a poor electoral map for the Democrats. She argues that despite their victory, the Republican Party will still have to work with President Obama, and moderate its Tea Party members who are likely to call for sweeping reforms. Failure to get anything done over the next two years could have ramifications for the Republican Party’s chances of holding on to the Senate in 2016, and for the party’s eventual presidential nominee.

Now that the dust has settled (mostly, pending a few races still too close to call or headed for a runoff or recount), we now know that Republicans will take control of the US Senate in January. That means that the Republican Party will control both houses of Congress for the first time since 2006. The results are not surprising, as polling during the final weeks of the campaign showed that this was likely to be a good year for Republicans. What does this outcome mean for the next two years in Washington as Barack Obama finishes his second term and how does this election shape the outcome for both the presidential and congressional elections in 2016?

Let’s start with why Republicans won. Numerous factors were at play that gave Republicans an advantage in this election cycle. Primary among them would be Obama’s low approval rating, which has hovered around 40 percent for more than a year, as well as polling that shows a majority of Americans believe that the country is on the wrong track. Low voter turnout (usually at or below 40 percent), which always favors Republicans and always occurs in midterm elections, also played a role. In addition, Republican candidates did a good job of staying on message (mostly in their attacks against Obama) and being disciplined on the campaign trail (no major gaffes, like comments in 2012 about “legitimate rape” that offended women in both parties). Also important is the fact that many Republicans beat out Tea Party challengers in the primaries, which allowed candidates to have broader appeal among Republican and independent voters in the general election. Finally, as the minority party in the Senate since 2006, Republicans benefitted from a strong anti-incumbent mood among the electorate. As the Washington Post called it in a recent headline, it was “An Election about Rejection.”

Other issues during the campaign played a significant role in why, conversely, Democrats lost (not only control of the Senate, but several seats in the House and some governor’s races). In the Senate, where one-third of the 100 seats are up for reelection every two years, this was perhaps the worst electoral map that Democrats have faced in decades. Many of the races were in red states, and the Democrats who lost were either elected for the first time or reelected in 2008 (a strong Democratic year with Obama at the top of the ticket). With lower voter turnout, and an unpopular Democratic president, many of the incumbents or even challengers did not have a real shot at winning in conservative-leaning states this year. An example: Kay Hagan, a Democrat who beat incumbent Republican Elizabeth Dole to win a Senate seat in North Carolina in 2008, lost her reelection bid to her Republican challenger. In addition, despite Obama’s low approval rating, and despite calls that it was a referendum on his presidency, he wasn’t actually on the ballot. This hurt Democratic candidates with voter turnout among key demographics, particularly young voters and minority voters (including African Americans, Latinos, and Asian Americans) who overwhelming voted for Obama (and other Democrats) in 2012. Distancing themselves from Obama did not help Democratic candidates in getting out the vote among these key constituencies. Finally, despite an improving economy during the Obama presidency, Democrats were unable to take credit for those gains, particularly as many Americans haven’t felt as much improvement in their own lives as the national economic indicators suggest. 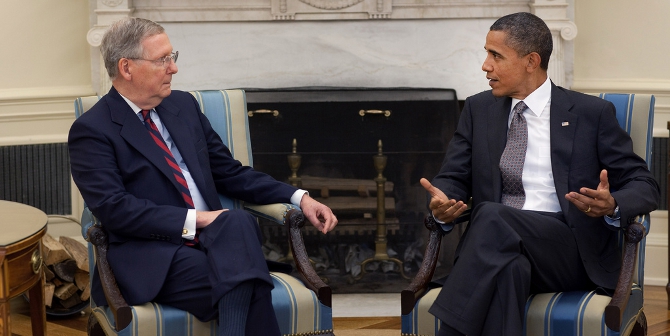 However, despite the victory on Tuesday, it’s not all good news for Republicans. The party’s brand is still widely unpopular, and while Americans are dissatisfied with both parties, polls suggest this is a bigger problem for Republicans than Democrats. Internally, the Tea Party still represents divisions that will not only make it difficult for the GOP to be unified, but will make compromises with the White House on legislation difficult as well. Like it or not, Republicans on Capitol Hill can’t govern alone, and must work with Obama to get something done as the legislative ball is now in their court. When the final results are in, Republicans may hold as many as 55 seats in the Senate, but that is well short of the 60 votes needed to break a Democratic filibuster, or the 67 votes need to override a presidential veto. While Tea Party members may call for sweeping legislative reform, Republican leaders will more than likely opt for more modest accomplishments, including a compromise with Obama on immigration reform, small tax reforms, and small fixes to but no repeal of the Affordable Care Act. Failure to get anything done over the next two years would not bode well for Republican chances for holding the Senate majority in 2016 (though the House seems safe barring a huge Democratic wave), and especially for the eventual Republican nominee in 2016 who will need a record of his or her party’s accomplishments on which to run.

While Democrats are reeling from Tuesday night’s loss, the news is not all bad for them. The 2016 Senate map looks much better, with many more contests in blue states. In addition, presidential election demographics will give an advantage to the Democratic nominee. And while Republicans may try to claim a mandate to govern during the next two years, making that claim is difficult with such low voter turnout and with their party so unpopular among the electorate. And what does this all mean for Obama for his last two years in office? His party losing control of the Senate will make any judicial or executive branch appointments, whether controversial or not, much more problematic. In preparing for this reality, the White House plans to push through numerous judicial nominations, as well as Attorney General Eric Holder’s replacement, in December before the next congressional session begins in January. Another controversial policy issue—approval of the Keystone XL Pipeline—may land on Obama’s desk soon, which will require the President to finally support or reject the plan. And any reform in areas such as immigration will now require even more compromise with Republicans. The bottom line is that Republicans in Congress and President Obama both have incentives to get things done in the next two years. Republicans will need to prove to voters that they are capable of governing, and Obama wants to accomplish some policy changes before he leaves office. Being seen as a president who can compromise with the opposing party and signing resulting legislation into law could go a long way in his approval rating rebounding, and in shaping his legacy, before he leaves office in January 2017.

Lori Cox Han – Chapman University
Lori Cox Han is Professor of Political Science at Chapman University in Orange, California. With research and teaching interests in the presidency, women and politics, media and politics, and political leadership, she is the author of several books, including In It to Win: Electing Madam President (Bloomsbury, forthcoming), Presidents and the American Presidency (Oxford University Press); A Presidency Upstaged: The Public Leadership of George H.W. Bush (Texas A&M University Press); Women and U.S. Politics: The Spectrum of Leadership, 2nd ed. (Lynne Rienner); and Governing From Center Stage: White House Communication Strategies During the Television Age of Politics (Hampton Press).