Last week saw the Democratic Party midterm elections lose control of the Senate and its representation in the House fall to numbers not seen in nearly 70 years. Christopher T. Stout looks at concerns that a decline in turnout from black, Latino, and Asian American voters contributed to the Democrats’ defeat. Using exit poll data, he finds that while these groups were underrepresented in the midterms, they voted in numbers similar to that of previous elections, and that they did not switch to the Republican Party. To explain the Democratic Party’s poor performance, he argues that we need to look to the growth in white Republican support, which has increased by 9 percent since 2006.

Barack Obama did not call the 2014 Midterm Election results a “shellacking” for his party as he did in 2010, but he might as well have. While public opinion polls showed that the Democratic Party was almost certain to lose control of the U.S. Senate, few could have predicted how poorly Democrats would do in several key races. Democrats lost U.S. Senate elections in all but one of the states (New Hampshire) considered a toss-up by realclearpolitics.com. To make matters worse, Democratic candidates lost gubernatorial elections in Massachusetts and Maryland where their party holds at least a 2-to-1 registration advantage.  Many pundits are starting to delve into the data to explore why the Democratic Party suffered such great losses in this election cycle.

One of the explanations for the Democratic Party’s losses is that their base did not turnout. There is evidence for this – young voters, who disproportionately support the Democratic Party, were outnumbered by voters 60 or older by more than a 2 to 1 margin. While it is certainly true that the 2014 midterm electorate, like all midterm electorates, was overwhelmingly white, male, and older, the magnitude of the losses for Democrats raises concerns that drastic declines in the Party’s base of black, Latino, and Asian American voters contributed to the their defeat in several key elections. 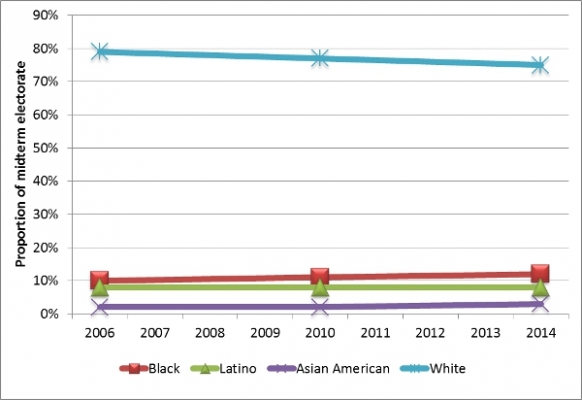 How valid are these concerns? We can gain some insight from exit polling. Figure 1 presents the proportion of the midterm electorate which is black, Latino, Asian-American, or white from exit polls conducted directly after the 2006, 2010, and 2014 midterm elections by CNN.  The figure shows a relatively flat pattern indicating that while blacks, Latinos, and Asian Americans continued to be underrepresented in the 2014 midterm elections, their levels of participation were not disproportionately lower in 2014 than in previous years. The differences in the Democratic Party’s strong performance in 2006 and the Party’s poor performance in 2014 then could not be driven simply by disproportionately lower levels of black, Latino, and Asian-American turnout.

Of course, an examination of aggregate turnout may obscure changes in racial/ethnic participation in key swing states.  In other words, it is possible that the Democratic Party’s losses in close elections may be driven by drastic declines in minority turnout in competitive states. But, while full exit poll data is not available, in states considered toss-ups like Georgia and Louisiana, blacks actually comprised of a greater share of the electorate in 2014 than they did in 2010. Latinos were also a slightly larger share of the electorate (~14) in 2014 than they were in 2010 (12 percent) in Colorado which had both a close U.S. Senate and gubernatorial election. Overall, the initial data demonstrates that while turnout was down in 2014, minority voter participation was not disproportionately lower than it had been in previous elections.

If large scale changes in minority turnout do not explain the Democratic Party’s losses in 2014, then a possible answer to the Party’s poor performance may be that minorities opted to support the Republican Party in greater numbers. This could be especially true in 2014 because the Republican Party diversified their pool of candidates and minorities may have been frustrated with the President’s lack of action on issues like immigration and growing racial income inequality. Figure 2 assesses this possibility by again relying on exit poll data from 2006, 2010, and 2014 to determine whether minority support for Republican Party U.S. House candidates changed over time. 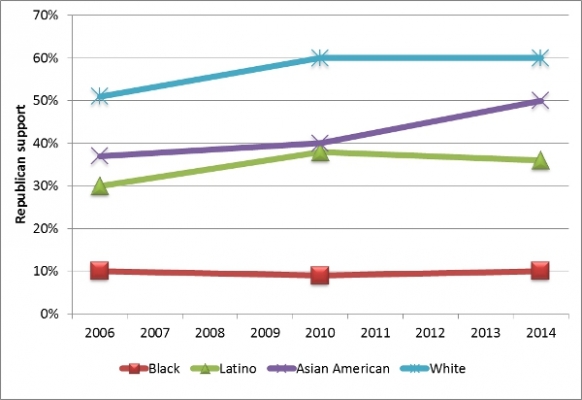 The results show little variation in black and Latino vote choice across all three midterm elections. In spite of increased efforts to appeal to black voters, only a small segment of the black community (~10 percent) reported voting for a Republican U.S. House candidate in any of the midterm elections. Latinos were more supportive of the Republican Party in 2010 than they were during the Democratic midterm wave of 2006 (30 percent). However, Latinos were less likely to support the Republican Party’s U.S. House nominee in 2014 (36 percent) than they were in 2010 (38 percent).

While changes in Latino and black Republican support do not explain why the Democratic Party did so poorly in 2014, we do gain some insight into the party’s performance from Figure 2. Asian-Americans became much more supportive of the Republican Party in 2014 (49 percent-but see Asian American Decision Poll which has a large sample of Asian American voters) than they were in 2006 (37 percent). However, given that Asian-Americans make up a small segment of the electorate and an even smaller proportion in toss-up states, this alone can’t explain the Republican’s strong performance in 2014.

The best explanation turns out to lie with the Republicans, rather than with the Democratic base.   Specifically, growth in white Republican support between 2006 and the midterm elections in which Obama was President largely explains why the Democratic Party performed so poorly in recent midterms. In the two most recent midterm elections, white support for the Republican Party has grown by about 9 percent compared to the Democratic wave of 2006. A close inspection of swing U.S. Senate races exemplify these changes. While candidates like Mary Landrieu (D-LA) and Mark Udall (D-CO) maintained their high levels of support among blacks and Latinos between 2008 and 2014, they lost a large segment of the white vote. In fact, Landrieu’s support among whites was almost cut in half between her initial run in 2008 (33 percent) and her re-election in 2014 (18 percent).

As more data becomes available, researchers, political parties, and pundits will spend more time exploring why the Republican Party did so well in 2014. Although initial explanations suggest that changes in minority voting habits may explain the Democratic Party’s downfall, there does not appear to be systematic evidence to suggest that minority political behavior in this election was significantly different than in 2006 when the Democratic Party retook the House of Representatives and the U.S. Senate. Instead, the losses that the Democrats suffered in 2014 appear to be largely driven by lack of support among whites who did turnout at the polls.