Since 2008, U.S. federal immigration has operated its ‘Secure Communities’ policy where arrestee’s identifiers are checked against immigration records. Federal immigration also identifies unauthorized immigrants who have been previously removed as a group that poses a risk to the community. Using a sample of nearly 3,000 foreign born inmates Jennifer Wong and Laura J. Hickman find that 91 percent of those who had previously been removed were rearrested within nine years, and that they were likely to be rearrested more frequently, and more quickly, compared to those who have never been removed.

Particularly since the terrorist attacks of September 11, 2001, the enforcement of civil immigration law within the interior of the United States has been an increasing focus of attention. What to do about the population of approximately 11.1 million unauthorized immigrants has been the subject of considerable controversy. There is, however, comparably less rancor over potential enforcement responses to criminally-involved unauthorized immigrants. Within this subgroup, a high priority has been placed on identifying and removing those who have previously been removed (i.e. deported) from the country. In new research, we find that those immigrants who had been previously deported have are more than 2.5 times more likely to be rearrested, and are likely to be rearrested much more frequently than those who have never been deported.

In 2008, the federal government launched “Secure Communities”, which means that when state and local law enforcement agencies send digitized fingerprint and arrestee information to the Federal Bureau of Investigation (FBI), the standard records check query is also routed through a separate immigration records check. If an arrestee is determined to be unauthorized and eligible for removal, an alert is sent to the corresponding U.S. Immigration and Customs Enforcement (ICE) field office. ICE may then request that the law enforcement agency detain the individual for transfer into federal immigration custody for potential detention and removal from the United States.

As of January 2013, Secure Communities has been “activated” in all U.S. local jurisdictions, accounting for 3,181 jurisdictions in all 50 states, the District of Columbia, and U.S. territories. Between its launch in late October 2008 and 2012, ICE reports that approximately 5 percent of over 28 million Secure Communities searches resulted in a match with an individual in federal immigration records. The process ultimately led to the removal of nearly 228,000 unauthorized immigrants during this period.

While Secure Communities has been welcomed in some jurisdictions, in others it has been implemented over the objections of local and state elected officials and vocal public protest. Among the issues raised are concerns about collateral consequences for policing in local communities. These include worsening relations between immigrant communities and law enforcement, leading to suppression of overall crime reporting, reduced cooperation with law enforcement investigations, and the thwarting of community policing efforts. In addition, a number of community protests have arisen around the assertion that Secure Communities is merely sweeping up large numbers of low-risk immigrants for minor offenses. Opposition groups often highlight examples of individuals transferred to ICE custody after arrests for public intoxication, unlicensed street ice cream sales, and unpaid parking tickets.

The U.S. Department of Homeland Security, in turn, has sought to clarify that its interior civil enforcement efforts are focused on individuals who pose a noteworthy risk to the community. One such group is unauthorized immigrants with a prior record of removal. This group has long been identified in political and policy discussions as posing a particularly high crime risk, potentially cycling back and forth across the U.S. border engaged in criminal pursuits. Through fiscal year 2012, ICE reports that Secure Communities has led to the apprehension and removal of over 42,000 unauthorized immigrants who had either been previously removed or had previously evaded final orders of removal/deportation. This represents approximately 19 percent of all removals of individuals identified through Secure Communities.

Rearrests are much more likely for those previously deported

Overall, 71 percent of all 517 unauthorized immigrants were rearrested at least once in the nine-year follow-up period. Bivariate analyses showed that among those with a record of previous removal, 91 percent were rearrested at least once compared with 64 percent of those never removed. This is a statistically significant and sizeable difference in likelihood of rearrest. 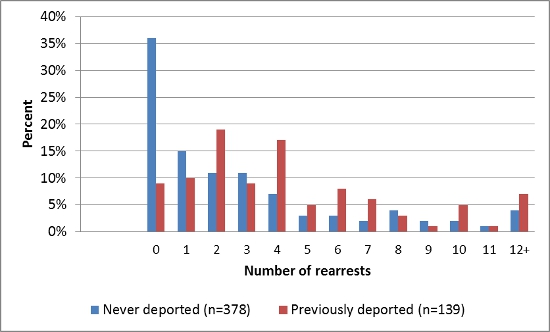 We also conducted more sophisticated multivariate analyses that included propensity score weighting and adjustments for a series of baseline characteristics. In these analyses, previous deportation remained a significant risk marker for recidivism. In comparison to unauthorized immigrants with no prior record of removal, those previously deported were 2.62 times more likely to be rearrested. Previously deported immigrants were also rearrested more frequently, with an average number of 4.5 new arrests over the nine-year period compared with 2.9 for the never-removed group. The time-to-rearrest findings were consistent as well, with previously deported immigrants showing a much more rapid time to first rearrest: 251.27 days compared with 484.03 days for those never removed.

Policy guidance is needed for the implementation of Secure Communities

Through the implementation of Secure Communities, willingly or not, local jurisdictions are now participating in locating unauthorized immigrants for potential detention or removal. Therefore, the policy question most relevant today (at least for state and local officials) may be how their resources can be most effectively applied in the communities they serve. To date, the field of criminology has conducted almost no work relevant to this question, largely owing to the extreme difficulty in accessing individual-level data on officially determined immigration status that can be merged with criminal records. State and local policymakers do not have the luxury of waiting (potentially decades) for researchers to build a conclusive body of evidence before deciding what to do about ICE requests for custody of specific arrestees through the Secure Communities mechanism. Our findings provide some empirical suggestion that those with a record of prior removal may be a group worthy of local review and policy consideration.

For federal agencies, it is important to increase focus on independent empirical analysis and open publication results related to immigrant populations. Agencies within the federal government must take some responsibility for prioritizing and supporting immigration and crime research, as it has for research on many other crime-related topics posing unsettled policy questions, such as community policing, domestic violence, and school violence. A similar level of federal commitment is needed to advance the field in the direction of empirically-informed policy guidance in the era of Secure Communities.

This article is based on the paper ‘Is Previous Removal From the United States a Marker for High Recidivism Risk? Results From a 9-Year Follow-Up Study of Criminally Involved Unauthorized Immigrants’, in Criminal Justice Policy Review.

Jennifer Wong – Simon Fraser University
Jennifer Wong is an Assistant Professor in the School of Criminology, Simon Fraser University. Her work employs applied and quantitative methods to study issues of delinquency/crime prevention and intervention, focusing primarily on evaluation and policy analysis in the areas of crime prevention and crime control policy. Her recent publications include systematic reviews and meta-analyses on gang prevention programs and community-based prevention programs for youth.

Laura J. Hickman – Portland State University
Laura J. Hickman is a Professor of Criminology & Criminal Justice at Portland State University and an Adjunct Behavioral Scientist at the RAND Corporation. Her work focuses on evaluating programs and policy responses to crime and victimization. Her work in the area of law enforcement and immigration includes leading the RAND evaluation of the Los Angeles County High Intensity Criminal Alien Prosecution program and Los Angeles County Foreign Born Jail Inmates Study. She has also published studies on a variety of crime policy related topics, including assessing factors influencing police recruiting and retention in the post-September 11th environment, the influence of police behavior on official reporting of repeat victimization, and the impact of a law enforcement program to impound vehicles of individuals driving with suspended/revoked licenses. Other recent work includes a multisite outcome evaluation of programs designed for children exposed to violence.