America’s 40 year ‘War on Drugs’ is widely regarded as a failure by most commentators. While recreational marijuana is now legal in four states and the District of Columbia, policies on more damaging drugs such as heroin have made drug cartels more powerful than ever. Daniel Faris looks at U.S. drug policy, and argues that we should look to emulate countries such as Germany, Canada and Australia, which have introduced supervised injection sites, as a way to remove as much danger as possible and to begin a societal discussion about how best to treat the problem of drug abuse.

The war on drugs is one of the most complicated issues of our time, and the recent rise in support for marijuana legalization is only the tip of the iceberg. While there’s no question that drug addiction is a public health concern that should be on all of our minds, it’s way past time to start accepting the fact that our current methods of dealing with the problem have failed spectacularly.

In a beautifully written piece over at the Boston Globe, Jack Cole, a cop with a 26-year service record, recently told it like it is when it comes to America’s failed crackdown on a very specific narcotic: heroin. As you might imagine, that single news story didn’t turn America’s drug war on its head, but it may yet help start a meaningful dialogue on the subject.

A time for change

It’s easy for people who haven’t had face-to-face encounters with drugs and their users to make grand claims about the “right thing to do.” But when somebody who’s actually been there says that America’s drug policy is a sham, it is worth sitting up and taking notice.

But one cop’s perspective, however enlightened, is not enough to turn the tide. Thankfully, Cole is in good company. Senators Cory Booker (D-New Jersey) and Rand Paul (R-Kentucky), have proposed a bill, the Redeem Act, which will attempt to de-stigmatize non-violent drug offenses by putting a limit on how long ex-convicts’ criminal records will count against them.

This bill comes at an important time; marijuana legalization is now supported by a majority of Americans, according to a CNN poll. With Oregon, Alaska, Washington D.C., Colorado and Washington leading the way, it’s only a matter of time before other state governments acquiesce to the will of the people. And all that fear-mongering about “drugged drivers” and widespread chaos following pot legalization? Such claims have almost universally been proved false. In some cases, the very opposite is true.

To be clear: neither Cole nor the kindly senators are calling for the legalization of heroin. After all, it’s frequently cited as one of the most damaging drugs on a community level. Even so, America’s heroin problem, which has occasionally been branded an “epidemic” over the years, is no such thing. As reported by the Washington Post, heroin use in the US is almost astonishingly low, notwithstanding several high-profile deaths that resulted from use of the drug, such as actor Philip Seymour Hoffman.

While the precise number of regular heroin users is still a bit of a mystery, what’s perfectly clear is this: the way we’ve gone about fighting the problem has gotten just about everything wrong. 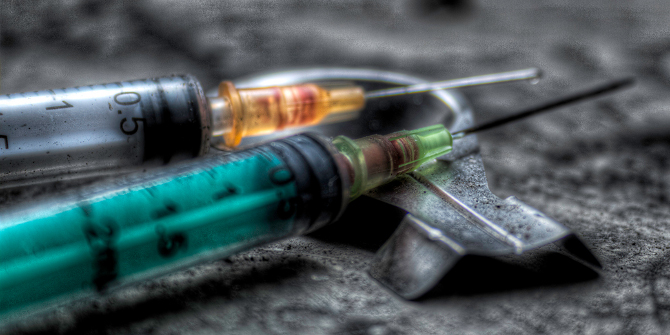 It’s time to face the fact that America’s war on drugs has done little more than make drug pushers and cartels more powerful than ever. In fact, from a certain point of view, our government’s actions have actually protected the interests of drug cartels.

So what’s the answer? Unsurprisingly, America’s fledgling marijuana legalization efforts seem to be one of the few things that have hit the cartels where they live – more successfully, in fact, than any other government initiative.

What we’ve created is a solution where control over America’s drug supplies are being put into the hands of – as Cole puts it – “the most unscrupulous and unregulated players.” The results really do speak for themselves: overdoses from heroin have doubled in just the last two years.

There are potential solutions already being implemented elsewhere in the world with positive results, but they might seem radical – at least at first – for some of us who live stateside.

Six countries across the globe, including Germany, Canada, and Australia, have established what they’re calling “supervised injection sites.” Yes, it’s exactly what it sounds like. These facilities serve as safe, non-judgmental places for users to inject heroin. It might sound appalling, at least until you realize that there are already more than 200 clean needle exchanges in the US – facilities that communicate to drug users that doing drugs safely is better, if only by a little, than doing it on the street with potentially contaminated needles.

The available evidence suggests that supervised injection sites have been successful in helping to reduce or eliminate quite a few of the potential health risks associated with using drugs “on the street,” such as HIV and even the threat of violence. A study of Insite, a Canadian facility and North America’s first safe injection site, confirmed its success.

While the ethical questions surrounding what some would call “enabling” drug use are many, it’s clear that this approach is miles ahead of the zero-tolerance approach we’re currently taking. Most of the nation’s rehab facilities – such as California’s Ocean Hills or Florida’s 12 Keys – feature the now-familiar 12 Steps Program. To be sure: supervised injection sites are not meant to be a substitute for proper addiction rehabilitation, but instead the gentle push that some drug users may need to recognize that their lifestyle is a dangerous and potentially deadly one. To see some of these traditional rehab centers begin to offer supervised injection might be alien, at least at first, but the gesture would renew our societal commitment to effective and well-rounded recovery efforts.

From there, it’s logical to postulate that the very first step toward fighting drug addiction is to eliminate as much danger as we possibly can from the equation, thereby creating a playing field where we can have a serious conversation about the problem, without the threat of death or incarceration looming over the proceedings.

That starts with our recognizing that drug addiction is the enemy – not the addicts.