In this year’s midterm elections only 36.4 percent of eligible voters turned out to cast a ballot. But are those who do not vote in such elections different from those that do? Anthony Fowler finds that marginal voters (those that would only vote because of a specific outside factor compared to those that vote who would vote regardless), tend to be significantly more Democratic than regular voters. He writes that this gap, combined with the fall in voter turnout during non-presidential year elections, may help to explain some of the Republican Party’s electoral success this year.

Abstention is common in American elections. At least 40 percent of eligible citizens will fail to participate in a typical presidential election, and this number can be significantly larger in less salient elections, such as at the recent midterms. Low participation leads to concerns that large segments of the population are under-represented or even ignored in the making of public policy. In order to assess and address these concerns, we’d like to know if those who regularly participate in elections differ systematically from those who abstain. Do the preferences of regular voters differ from those on the margins? Would election outcomes and public policies be different if more people voted?

These questions are difficult to answer for several reasons. Nonvoters may be difficult to reach with surveys, and they may be unable to tell us how they would have voted if they had participated. Furthermore, statistical analyses of surveys and polling data typically require strong, unjustified assumptions. However, in my recent research, I provide a new approach for comparing regular and marginal voters that relies upon observed voting behavior in real elections. I identify exogenous factors that influence participation in elections and use these factors to estimate the partisan preferences of regular voters who would have participated regardless of that factor and marginal voters whose participation decisions were influenced by that factor.

Many outside factors influence participation, and they can all be used to compare different populations of regular and marginal voters. For example, 1 in 200 citizens will participate in presidential election if the weather is good but will abstain if it rains or snows. For a more impactful example, 1 in 4 citizens in Australia appear to participate as a result of compulsory voting laws but would otherwise abstain.  In either case, we can utilize these effects to compare the partisan preferences of marginal voters (who will only vote in good weather or under compulsory voting) and regular voters (who would vote regardless of weather or compulsory voting laws).

Figure 1 below compares the voting behavior of the “on-cycle” states, whose elections coincide with presidential races to the “off-cycle” states, whose elections fall in odd or midterm years. In the top two panels, we see that these two groups of states behave in nearly identical ways in presidential elections. They turn out and support Democratic candidates at essentially the same rate. However, turnout in gubernatorial elections is 17 percentage points higher in on-cycle states, suggesting that 17 percent of eligible voters will participate in a gubernatorial race if it coincides with a presidential race but will otherwise abstain. To assess whether these marginal voters have systematically different partisan preferences, we can compare the partisan voting patterns of on- and off-cycle states in gubernatorial races. In the bottom panel of the figure, we see that voters in on-cycle states are 6 percentage points more likely to support Democratic candidates than those in off-cycle states. 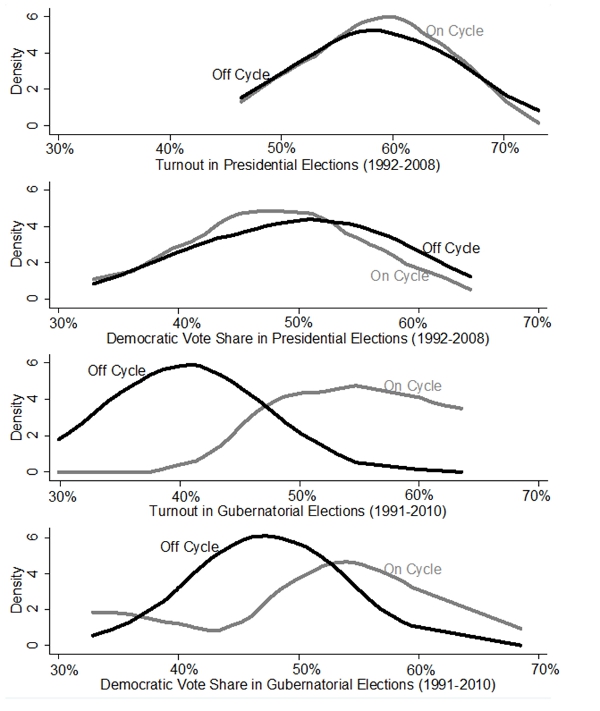 These results suggest that marginal changes in the size of the electorate can have important electoral consequences. However, to estimate the preferences of regular and marginal voters, further analysis is required. The underlying preferences of regular and marginal voters can be estimated from these aggregate election returns. With a little algebra, we can figure out how the marginal voters must have behaved in order to produce the aggregate results that we observe. Implementing this approach, I estimate that regular voters in gubernatorial elections (who would have voted regardless of timing) support Democratic candidates 47 percent of the time, while marginal voters support Democrats 68 percent of the time. This means there is a 21 percentage point gap in the partisan preferences of regular and marginal voters. Furthermore, this difference is enough to tip the results of many elections. Controlling for other factors, on-cycle states are 45 percentage points more likely to elect Democratic governors than off-cycle states, despite the fact that they vote identically in presidential races.

These results may help us to understand at least some of the Republican Party’s success in the recent 2014 midterm elections. Illinois and Massachusetts, two Democratic strongholds in presidential elections, elected Republican governors. Four Democratic senators (last elected in 2008) lost their seats and four more retired (perhaps strategically) and saw their seat go to Republicans. Before we attribute these results to the failings of President Obama and the Democratic Party, and before we even conclude that individual voters deviated from their typical partisan leanings, we should note that turnout was “abysmally low.” For whatever reasons, many marginal voters stayed home, and most of them were likely Democratic supporters. These abstentions may have had significant partisan consequences.

Across several different electoral settings, I find that marginal voters are significantly more Democratic than regular voters. The extent of this difference varies, as expected, across settings, time periods, and different marginal populations. Nonetheless, the results suggest that regular voters are not representative of the larger pool of possible voters. Citizens on the margins differ systematically in their partisan preferences, and this divergence may have significant consequences for election results and public policies.

This article is based on the paper ‘Regular Voters, Marginal Voters and the Electoral Effects of Turnout’ in Political Science Research and Methods.