With a wide-range of competing immigration reform bills being debated in a gridlocked U.S. congress, the question remains: can a compromise bill ever emerge and what is the optimal form it should take?  Surprisingly, there is little evidence on the immigration reform attributes most valued by the group who will be most affected: illegal immigrants themselves.  Grace Melo, Gregory Colson, and Octavio Ramirez examine the tradeoff and dollar value Hispanic immigrants place on different attributes of competing U.S. Senate and House immigration reform bills.  They find that illegal immigrants place a substantial value on long-term work visas, a path to citizenship, and the ability for family members to be eligible for visitation rights.  Notably, a green card is valued approximately the same as a ten year work visa.  Access to government safety nets including medical care and social security are valued to a lesser extent.

Immigration and potential reforms to immigration policies (e.g., S.744, H.R. 1417, H.R. 1772, H.R. 1773, H.R. 2131, H.R. 2278) are among the most contentious issues in U.S. politics with divides along political party, industry, and ethnic lines.  With an estimated 11.2 million illegal immigrants currently residing in the U.S., 81 percent of whom are of Hispanic origin, any actions that change the quantity and design of temporary work visas and enact either increased deportations or grant amnesty for current immigrants will have a marked impact on the U.S. economy, election outcomes, and the lives of millions of individuals unlawfully living and working in the U.S..  Surprisingly, despite regular polling, political discussions, and media coverage of immigration reform, an important piece of information is missing from the debate: the opinions and preferences of illegal Hispanic immigrants themselves.  This is the group that will be most directly impacted by any reform, yet quantitative evidence on their value for specific immigration reform elements is absent.

To quantify immigrants’ tradeoff between different features of a potential compromise reform bill, we conducted a survey and choice experiment with a sample of legal and illegal Hispanic immigrants were presented with a series of choices between different immigration policies and asked to choose the policy that they would most prefer.  Each immigration policy included five different key attributes: (1) Green card-eligibility, (2) Cost, (3) Family visitation eligibility, (4) Work visa length, and (5) Eligibility for federal benefits.  Table 1 illustrates the five different attributes and different characteristics that were considered based on current immigration reform proposals presented in Congress.

Table 1 – Immigration Policy Attributes and Levels in the Choice Experiment 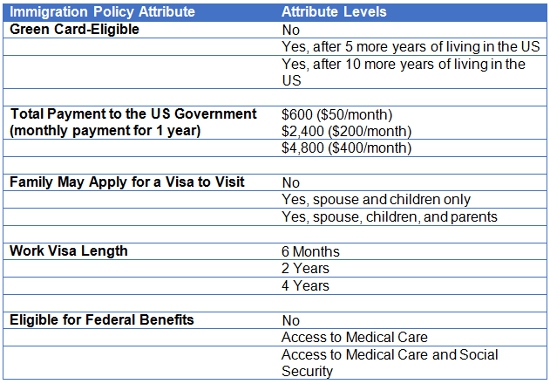 Table 2 shows an English translation of one of the twelve different choice scenarios presented in Spanish to the sample of immigrants.  In each scenario, the attributes making up the different immigration policy options were randomized from the set listed in Table 1. 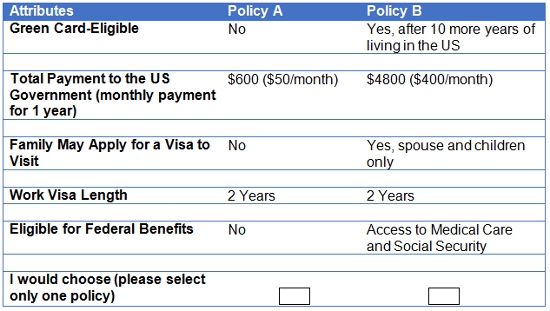 Analysis of responses to the choice experiment yields a measure of respondents average willingness to pay (WTP) for each of the immigration policy attributes.  Figure 1 presents WTP estimates for the entire sample of surveyed Hispanic immigrants and the subset of respondents who stated that they had illegally entered the United States. 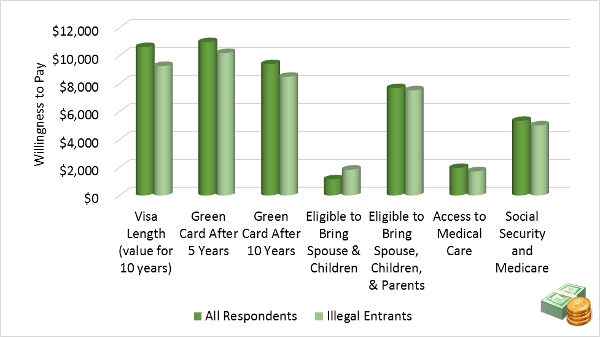 Three key results stand out.  First, eligibility for a green card is the most valued attribute.  However, the WTP for being eligible for a green card after 5 years of living and working in the U.S. is only slightly higher (about $1,500-$1,600) than waiting 10 years to being eligible.  This indicates that it is the path to legal permanent resident status, not the length of the wait, which is most important to Hispanic immigrants.

Second, the sample of Hispanic immigrants place a significant value ($925) on each additional year of a legal visa to live and work in the U.S. even without a path to legal permanent residence (obtaining a green card).  Considering that the average income of illegal entrants was about $1,244 per month, the ability to legally work in the US is highly valuable with illegal immigrants willing to pay a significant (~6%) additional annual income “tax” in exchange for the ability to even temporarily live and work in the US.

Third, of the non-work related immigration policy characteristics, eligibility for family to potentially legally visit is valued much more than access to medical care and even retirement benefits such as social security and Medicare.  However, neither the Senate nor House Bills offer expansions for family based visas for all types of temporary immigrant workers. This finding contrasts with the assertions by some news media and politicians that Hispanic immigrants come or stay in the U.S. attracted by the prospect of free medical care.

Overall, our results indicate that there are multiple avenues to a compromise immigration reform bill that could appeal to illegal Hispanic immigrants.  From their perspective, a reform with long-term work visas, a path to citizenship, family visitation rights, and access to social services would be optimal.  However, if all of these features are not possible in the current political climate, the evidence from the choice experiment indicate that there are several combinations of reform elements that would still deliver substantial value to Hispanic immigrants.

This article is based on the paper ‘Hispanic American Opinions toward Immigration and Immigration Policy Reform Proposals’, in Applied Economic Perspectives and Policy.