Late on Friday evening, a Grand Jury in Ferguson Missouri reached a decision not to indict police officer Darren Wilson in the killing of a black teenager, Mike Brown, in August. Shana Redmond writes that the decision is another example of the system acting to preserve itself at the expense of black communities. In the aftermath of the decision, which has seen widespread protests, state officials and police have reacted by asserting their commitment to the protection of property, rather than engaging with the protestors or their concerns. With protests spreading to other cities, she argues that for many, the events in Ferguson have become a symbol of the daily brutality of racism in America.

There is no amount of rhetoric that could have convinced most Black people in the United States that police officer Darren Wilson would face indictment for the murder of Black teenager Mike Brown. The history and present of Black life in the U.S. proves our extraordinary and collective disadvantage, especially within the legal system. This we know. Yet all of the knowledge and reason in the world does not prevent Black people from hoping against hope (and common sense) that the system that imperils Black life would turn on itself. For a brief moment, it was possible that an agent of the state would be held accountable for the death of a Black man. On Monday the system decided–as all do when given a choice–to preserve itself.

Black people now seek redress in the very streets that were recently sites of mourning over Brown, Ezell Ford, John Crawford, Eric Garner and many, many others. The numbers of the dead are only one indication of the state of siege faced by the African descended in the U.S. As Robin D.G. Kelley and others have documented, Black people are the enemy combatants of a long-term, low-intensity domestic war. One might be inclined to label it a Civil War if the participants could each make equally legitimate claims to and on the state. Unfortunately nothing could be farther from the truth. Mike Brown’s murder, in Ferguson, Missouri, was yet another exhibition of the fallacy of U.S. equality; from the excessive policing of Black and brown communities that led to his gratuitous jaywalking stop to the legal system that announced his murder as permissible, what we find instead is an entrenched and unrelenting system designed to render blackness criminal, dangerous, misbegotten, and abject in the eyes of the law and the society over which it mercilessly lords.

The reaction by Ferguson, St. Louis, and Missouri state officials to the on-going resistance is indicative of this war of maneuver. The escalation of the responsive police ranks from Ferguson Police Department (PD) to St. Louis county PD, to the National Guard represents the state’s attempt to keep pace with the increased numbers of rank-and-file who have denounced them as illegitimate. Instead of creating fear, the excessive use of force in Ferguson has emboldened these women and men, elderly and children, who are, overwhelmingly, peaceful and poised even in the midst of the chaos created by the state’s disorganization. Reports from Ferguson and other rebellious cities cite the reckless and intentionally incendiary nature of the policing that, for example, sets up safe zones and then proceeds to bomb occupants with tear gas. Police directives change from block to block; on one, moving groups are forced to stop while those who stand still on the next are forced to go elsewhere. These tactics are reminiscent of the Black Codes–a matrix of pervasive (extra)legal practices enacted during Reconstruction which, in order to disabuse the recently emancipated of their citizenship and freedom claims, ticketed and jailed Black people for any number of “offenses,” including both mobility and immobility. 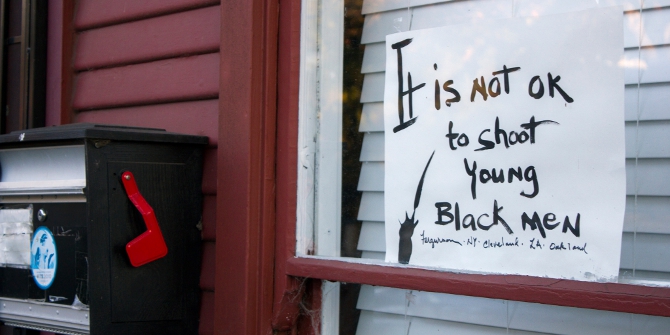 Post-Civil War police forces were often called upon to dispense Black Code violations and apprehend “offenders” at the behest of employers. Now, as then, U.S. police are beckoned as agents of private interest. While Black people continue to be jailed, tear-gassed, and otherwise exposed to radical harm, Ferguson police chief Thomas Jackson and Missouri governor Jay Nixon repeatedly assert their commitment to the protection of property. This striking juxtaposition announces the status of blackness in the political sphere: those who were once considered property are now its subordinate. The mainstream reporting of burned out and closed QuikTrip convenience stores far outpaces coverage of the brutalities faced by marchers and residents of Ferguson, many of whom are displaced and/or queer youth.

While it was Brown’s death that brought the spectacle of critical mass, it is the quotidian brutality of U.S. racism–defined by Ruth Wilson Gilmore as “the state-sanctioned or extralegal production and exploitation of group-differentiated vulnerability to premature death” (2007; 28)–that has shaped all that unfolds in Boston, New York City, Atlanta, Minneapolis, Milwaukee, Chicago, Oakland, and Los Angeles. Ferguson is a meta-site through which Black communities now struggle with the recurrent recognition that our citizenship is not comparable to others and life is not secure or guaranteed.

Disproportionate rates of incarceration and preventable death, unemployment and educational disadvantage, sexual violence and political disfranchisement are the cruelties that we know and yet we survive them every day. The battle for Ferguson is the choice to live and the will to collectively build alternatives to this frightening present.

Shana L. Redmond – University of Southern California
Shana L. Redmond is Associate Professor of American studies and ethnicity at the University of Southern California and the author of Anthem: social movements and the sound of solidarity in the African diaspora (NYU Press, 2014), which examines the sonic politics performed amongst and between organized Afro-diasporic publics in the twentieth century. She tweets @ShanaRedmond.