With releases from federal and state prisons on the rise, one aim of prison policy is to reduce the likelihood that former prisoners will reoffend, and then return to prison once again.  In new research, Valerie Clark finds that where parolees are released is very important in determining whether or not they will be re-arrested. She writes that prisoners released to work release centers have the lowest re-arrest rate, and those to emergency shelters or onto the street, the highest.  She argues that when deciding on the housing environment that former prisoners should be released to, case managers and corrections staff should take into account factors such as neighborhood disadvantage (which can increase the risk of recidivism), and individual prisoners’ characteristics.

Prison populations continue to shrink nationally while releases from federal and state prisons have outpaced admissions for four consecutive years. As former prisoners attempt to reintegrate back into communities, one of the first and most critical obstacles they encounter is finding and securing stable housing. Housing restrictions for convicted felons, financial hardships, and disrupted personal relationships all contribute to the housing difficulties faced by returning felons. Moreover, many prisoners come from and return to disadvantaged communities, which are often the same communities that increase the risk of recidivism.

The types of housing placements that former prisoners return to matters for recidivism, including transitional housing (i.e., “halfway houses”), work release centers, and homelessness. As Figure 1 shows, a slight majority of Minnesota state prisoners released in 2009 went directly from prison to private residential addresses, living either independently or with family and friends.  The remaining 45 percent of those prisoners went directly to short-term transitional housing, work release centers, emergency shelters or homelessness, and in-patient treatment centers for chemical dependency or other physical and mental ailments. 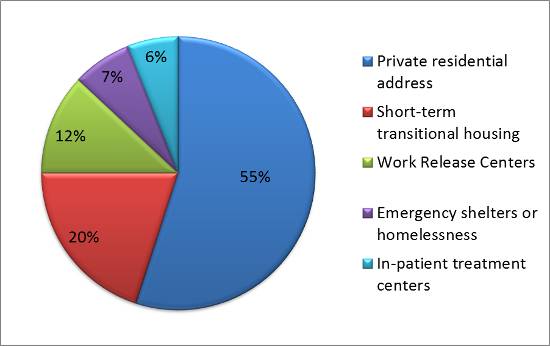 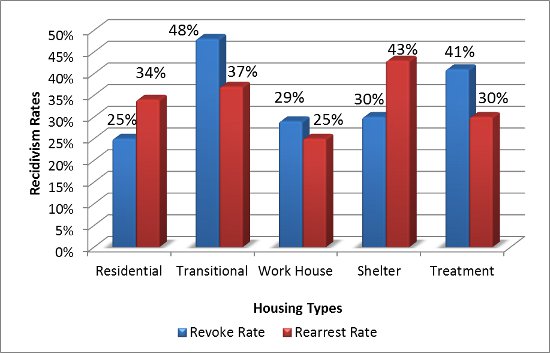 The rates of recidivism displayed in Figure 2 do not control for factors such as gender, age, and prior criminal history, which are all relevant factors in predicting recidivism. More thorough analyses of these data that accounted for basic demographic, offense, and confinement information revealed that going directly from prison to transitional housing, work release centers, and in-patient treatment significantly increased the odds of a supervision revocation within the first year of release compared to being released to a private address.  Going directly from prison to a work release center decreased the odds of having a new arrest relative to release to a private address, whereas going directly to an emergency shelter or complete homelessness increased the odds of re-arrest.

Figure 3 – Predicted Probabilities of Re-arrest Based on Neighborhood Disadvantage 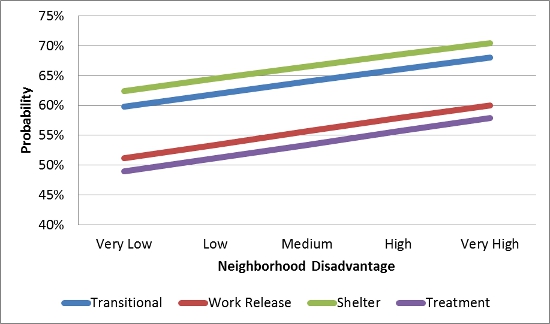 While the data did show that risk of recidivism varied significantly across neighborhoods and that neighborhood disadvantage increased the odds of re-arrest, a large majority of that risk could be explained by individual-level characteristics. That is, some neighborhoods might have had higher than average recidivism rates due more to the individual-level risk factors of the prisoners returning to those neighborhoods than due to the characteristics of those neighborhoods. Younger, male former prisoners with lengthier criminal histories (including prior convictions and prior supervision failures) who were under more intense levels of supervision upon release consistently had higher odds of re-arrest or revocation from supervision.

After the Pennsylvania Department of Corrections found that parolees released to correctional-based postrelease housing had higher rates of rearrest than parolees released to the streets, legislative leaders in both Pennsylvania and New Jersey concluded that halfway houses were failing. The fact that correctional-based housing (transitional housing and work release) significantly increased the risk of supervision revocation in the present study does not mean that this type of housing should not be used for newly released prisoners for two reasons. First, not only did transitional housing have a relatively small and nonsignificant relationship with rearrest, work release placements significantly reduced the odds of rearrest compared with private residential placements. Thus, some types of correctional-based housing may be beneficial to released prisoners depending on the programs being offered with the housing and the type of recidivism being measured. Second, transitional housing practices can vary from location to location both within, and between, states. Before concluding that certain housing placements are failing, prison administrators must carefully examine each venue and assess whether or not evidence-based practices are being followed. One type of recidivism should not be the lone measuring stick of program success.

Housing placements are likely a proxy for the level of social support a newly released prisoner receives in the community. Prisoners who are able to live independently or with family and friends likely have more resources available and higher levels of social support, which is integral to successful reintegration. On the other end of the spectrum, prisoners released to homeless shelters probably do not have supportive networks, and the lack of stable housing can disrupt important reentry activities, such as finding employment or participating in treatment.

Overall, these data highlight the impact that post-release housing placements can have on reentry. Institutional case managers and community corrections staff often have limited control over where offenders can be placed. Financial limitations, availability of certain types of housing, and restrictions on where certain types of offenders can live leave corrections staff with few housing options. Policy makers should work to ensure that correctional agencies have the resources needed to fit offenders to the most appropriate placements.

This article is based on the paper ‘Predicting Two Types of Recidivism Among Newly Released Prisoners: First Addresses as “Launch Pads” for Recidivism or Reentry Success’, in Crime & Delinquency.

Note:  This article gives the views of the author, and not the position of U.S.App– American Politics and Policy, nor of the London School of Economics, nor the Minnesota Department of Corrections.