After the midterm elections, the Democratic Party is now very nearly unrepresented in the Southern states of the U.S., the culmination of a political realignment that began in the 1960s. In new research, Rory McVeigh finds that those counties that experienced greater levels of activism by the racist Ku Klux Klan experienced a five percent greater swing to the Republican Party. He argues that these results show that social movement activism can be effective in bringing about change, as people’s votes changed because of racial interests as opposed to party loyalties.

The 2014 mid-term elections snuffed out what was left of the Democratic Party’s frail existence in the southern U.S.  While some southern Democrats remain in the House of Representatives, Republicans now occupy every Southern position in the U.S. Senate, every Governor’s seat, and they control every state legislature.  This represents the culmination of a significant political realignment, as the states of the former Confederacy, until the 1960s, were solidly in the Democratic camp.  Southern voters enthusiastically supported Democratic President Franklin Roosevelt as he enacted progressive legislation in response to the great depression of the 1930s.  Indeed, in the election of 1932, Roosevelt easily carried all southern states while securing more than 90 percent of the popular vote in Georgia, Louisiana, Mississippi, and South Carolina.

Although populist politics appealed to many southern voters in earlier times, the southern Democratic Party was also a key instrument in the defense of white privilege and racial oppression.  Indeed, African Americans were not allowed to register as Democrats in southern states and were largely disfranchised through a variety of other means.  The strong tie between white southern voters and the Democratic Party began to unravel with the passage of the Civil Rights Act in 1964 and the Voting Rights Act in 1965.  As national Democratic candidates increasingly embraced the cause of civil rights, white southerners began to defect to the Republican Party.  Figure 1 illustrates increases in the vote for the Republican candidate in the 2000 election (George W. Bush) over the vote for Republican Richard Nixon in 1960.  Most southern counties have shown substantial increases in Republican voting.  Yet the change has not been uniform across local contexts. 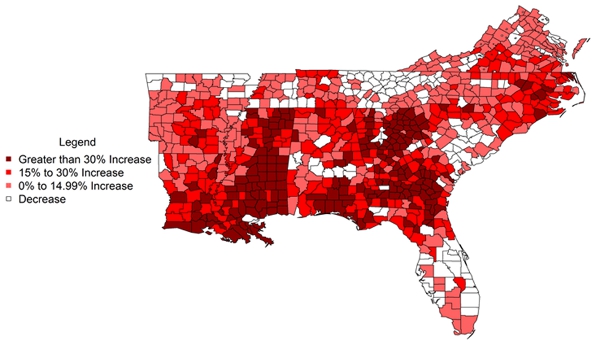 Historians and social scientists have studied the ways in which Republican candidates capitalized on backlash generated by the civil rights movement to win the sympathies of southern voters.  But in recent research, David Cunningham of Brandeis University and Justin Farrell of Yale University and I examined the role that racist extremism played in the realignment of voting patterns in southern communities.  Because the FBI was involved in an extensive surveillance campaign directed against the Ku Klux Klan in the 1960s, we have a good record of which southern counties had at least one Klan organization and which ones did not.  As Figure 2 shows, Klan organizations were spread primarily across ten southern states, with significant geographical clustering. 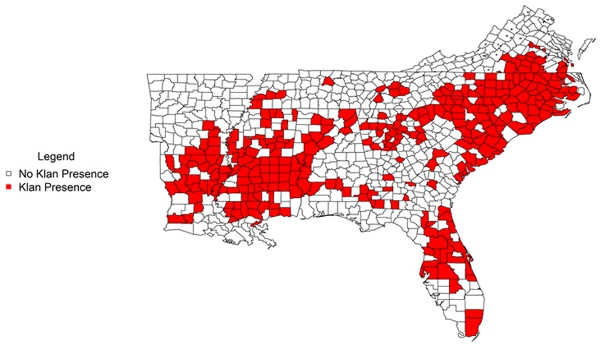 The primary question that drove our research is whether or not southern counties that experienced Klan activism in the 1960s showed greater increases in Republican voting than did southern counties that did not have Klan organizations.  We statistically controlled for numerous other changes that took place within counties over time.  Our analysis benefited from the fact that we had a measure of Republican voting prior to the resurgence of the Ku Klux Klan in the early 1960s, as well as measures of voting in subsequent elections that were held after the period of intense Klan activism had faded.

We found that Klan counties did, in fact, experience greater movement to the Republican candidates and, importantly, we found that the effect of Klan activism did not diminish over time.  For example, when we examined the difference in the Republican vote for Richard Nixon in 1960 and the vote for Republican George W. Bush in 2000, the growth in Republican voting was, on average, more than five percent higher in Klan counties compared to non-Klan counties, net of other factors that contributed to the change.  Given that the 2000 election was decided by an extremely tight race in the state of Florida, one might argue that the historical influence of the Klan represents the difference between a Bush presidency and an Al Gore presidency.

Our research was motivated by more general theoretical questions about whether, and how, social movement activism can bring about change.  In this case, our research addressed an under-explored question about how social movements may contribute to change that outlives the movement itself.  In our analysis we demonstrate that the Klan, in the short term, played a role in voting realignment by drawing attention to the shifting party stances on civil rights issues and by encouraging members and sympathizers to vote according to their racial interests rather than according to past party loyalties.  We argue that these voting shifts can be “locked in” when a movement becomes a hot topic of discussion within local settings, as the Klan clearly was during this time period.  Controversy generated by militant movement action can disrupt social ties, embedding individuals within new discussion and friendship networks that can reinforce newly emerging political divides as individuals break off associations with those who might otherwise, over time, draw them back into prior voting alliances.

Our interest in political polarization led us not only to examine change in county voting over time, but also to analyze how former Klan activism might be related to individual voting behavior.  We obtained survey data from the 1992 Southern Focus Poll to examine voting preferences decades after the Klan had declined.  We were particularly interested in how racial attitudes mapped on to voting preferences, and whether that differed depending upon whether the Klan had previously been active in the individual’s county of residence.  In multivariate analyses, we found that conservative racial attitudes did predict Republican voting, but that was only the case in counties that had experienced prior Klan activism.  In general, we feel that our analyses are capturing key dynamics that can lead to the kind of polarization that is reflected in U.S. politics today, where voters’ preferences across a broad range of issues have increasingly become aligned with positions promoted by a single party, leaving little opportunity or incentive to seek compromise across party lines.

This article is based on the paper ‘Political Polarization as a Social Movement Outcome: 1960s Klan Activism and Its Enduring Impact on Political Realignment in Southern Counties, 1960 to 2000’, in the American Sociological Review. This paper will be ungated until the end of March, 2015.

Rory McVeigh – University of Notre Dame
Rory McVeigh is professor and chair of the Department of Sociology at the University of Notre Dame.  He is the director of The Center for the Study of Social Movements and the editor of Mobilization: The International Quarterly Review of Social Movement Research.  His research focuses on identifying structural foundations of social conflict and investigating long-term consequences of social movement mobilization.  Much of his recent work addresses social and political consequences of different forms of segregation.  He is the author of The Rise of the Ku Klux Klan: Right-Wing Movements and National Politics (University of Minnesota Press, 2009).

December 17th, 2014|Democracy and culture, Elections and party politics across the US, Rory McVeigh|6 Comments
Previous post Next post