With the rise of inequality and the decline of suburban areas in some North American cities, ‘food deserts’ have become an increasingly important problem for urban policymakers. Using Edmonton, Alberta as a case study, Feng Qiu looks at whether community gardens and farmers markets can act to alleviate these urban food deserts, and increase food access amongst disadvantaged groups. She finds that community gardens and farmers’ markets tend to benefit those living in the city centre the most, and that their ability to alleviate fresh food deficits for the entire city, especially its periphery, is limited.

The term ‘food desert’ has frequently been used to describe situations in which consumers lack access to affordable nutritious food, typically a populated low-income area with limited access to full-service supermarkets. In addition to supermarkets which typically sell meat, fresh produce, dairy, baked goods, as well as canned and packaged goods, there is growing interest in the role of community gardens and farmers’ markets as solutions to food desert problems. A community garden is a plot of land that is gardened collectively by a group of people. It can provide group members and other local residents with fresh vegetables and fruits. A farmers’ market is a physical retail market featuring foods sold directly by farmers to consumers. Farmers’ markets typically consist of booths, tables, and stands, outdoors or indoors, where farmers sell fruits, vegetables, meats, and prepared foods and beverages.

Despite the prominence of farmers’ markets and community gardens, little research has been conducted to incorporate both, together with supermarkets, into food desert analysis. We use spatial data and analytical techniques and fill a gap in the quantitative research on this topic. We find that while community gardens can increase food access, this is only the case in certain areas, and not for the city as a whole. 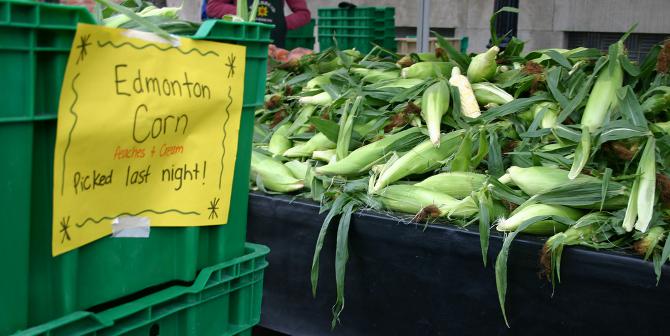 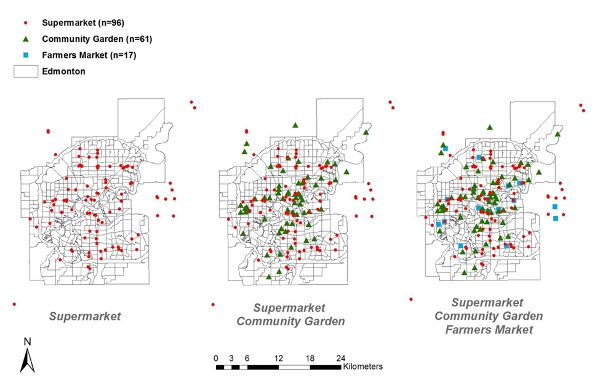 Figure 2 – Demographic and Socio-economic Characteristics at the Neighborhood Level 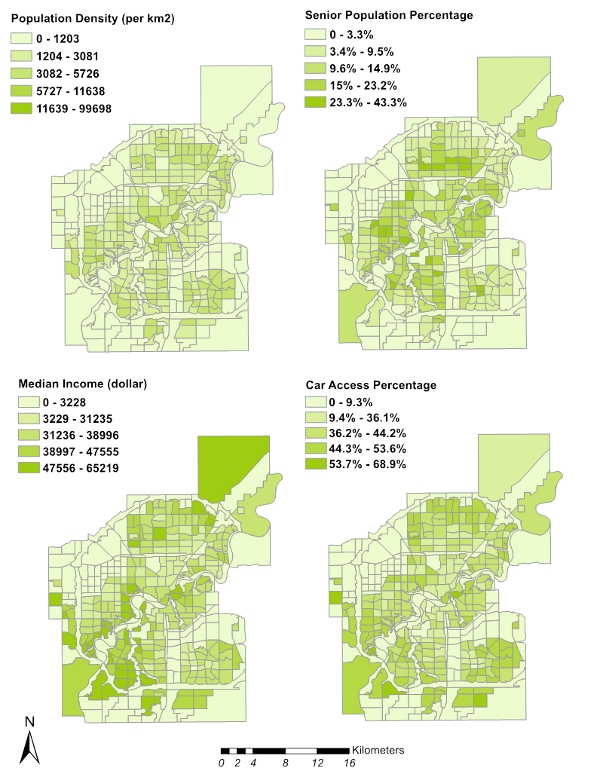 While several studies in the United States have found that neighborhoods with lower access to supermarkets tend to be located in areas of lower income, inner-city and predominantly African American or Hispanic communities, neighborhoods in Edmonton with low incomes generally have high supermarket accessibility. Several neighborhoods with dense populations and relatively high income and good access to vehicles (especially in the west, northeast, and southeast of Edmonton) have poor access to supermarkets. After community gardens and farmers’ markets are considered, the problem is somewhat mitigated in the western area while the problem remains in the other areas. People living in the city center appear to benefit most from these additional sources of fresh vegetables and fruits. With regard to the distribution, community gardens tend to cluster in highly populated neighborhoods, while most farmers’ markets are located in densely populated areas within a short distance of the North Saskatchewan River that crosses the city. A subset of highly populated neighborhoods in the southeast of the city lacks easy access to any of the three types of fresh food providers.

We further identified eight food deserts when combining criteria of low accessibility and high needs (Figure 3). Community gardens help relieve the food desert issue for three mature, inner-suburban neighborhoods (1, 3, and 5) and farmers’ markets help mitigate the food desert problem for neighborhood 5. Results imply that previous research on food deserts that did not take account of community gardens, farmers’ markets or other types of local food supplies might have overestimated the issue. Of course, it is important to recognize that community gardens provide fresh food for relatively small numbers of households and only for a few months each year, most farmers’ markets are held outdoors and are open from May through October. 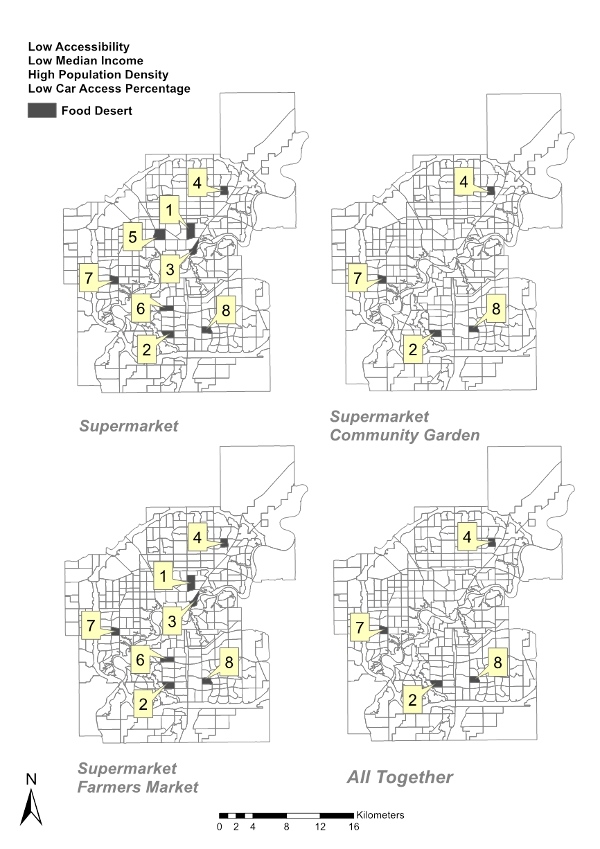 According to a series of regression analyses, we further find that community gardens, though they help relieve food desert problems for several neighborhoods (specifically, those with low accessibility, a low median income, low car access percentage, and high population density) as optional fresh food providers, have a positive association with the location of supermarkets. That said, they are more likely to be located in neighborhoods have good access to supermarkets and do not fully benefit neighborhoods with poor access in a general sense.

Overall, our results for the case of Edmonton show that community gardens and farmers’ markets can help increase fresh food access and relieve food desert problems to a certain extent, but their ability to alleviate the deficit of fresh food for the entire city area, especially the southwest, southeast, and peripheral regions, is limited.

The City of Edmonton has recently adopted a food and agriculture strategy called Fresh that seeks to build a resilient food system that contributes to the local economy and overall social and environmental sustainability. Results from this analysis have particular relevance for that strategy. First, Edmonton’s eight food deserts are not clustered in the inner city, as they are in many U.S. cities, but rather are scattered across the inner suburban parts of the city. A one-size-fits-all approach will not be appropriate to address those problems. Second, the areas of the city that have poorest access to supermarkets, the periphery and southwest parts of the city, tend also to be areas of relatively high income and relatively good access to private transport. Within those neighborhoods, there are bound to be individuals and families, particularly seniors, with greater need. Targeted approaches, such as Meals on Wheels programs or retail home delivery services may be appropriate to address those needs. Third, the 17 farmers’ markets that currently operate in Edmonton have been located to address food desert concerns in one area but the potential benefits are not yet fully effective from a social benefit perspective. The City of Edmonton could take a more proactive approach to support farmers’ markets in the food deserts in the northeast and southeast of the city and the areas of poor supermarket access in the peripheries and southwest. Fourth, the City of Edmonton could further expand the network of community gardens by making it easier for new and existing community groups to access vacant land public and private land in the city.

This article is based on the paper, ‘Can community gardens and farmers’ markets relieve food desert problems? A study of Edmonton, Canada’, in Applied Geography.

Feng Qiu – University of Alberta
Feng Qiu is an Assistant Professor at the Department of Resource Economics and Environmental Sociology at the University of Alberta. Her research interests include agricultural policy, price analysis, risk and insurance modeling, applied spatial statistics, and applied econometrics.