Is urban sprawl good for us? Recent years have seen a growing debate over the costs and benefits of urban sprawl compared with denser communities in areas such as public health and environmental sustainability. Using data from nearly 1,000 metropolitan counties across the U.S., Reid Ewing and Shima Hamidi examine the relationship between sprawl and fatal crashes. They find that while less dense areas tend to experience lower rates of fatal crashes, they have a greater number of crashes in total, as well as crashes which cause injury and property damage.

Across the U.S., the debate over metropolitan sprawl and its quality-of-life impacts continues.  For some, sprawl is at the heart of many of our urban problems.  For others, sprawl is a benign response to consumer housing preferences. Because the debate lacks an anchoring definition of sprawl, it has an unfocused, polemic quality.  There is little agreement on the definition of sprawl or its alternatives: compact development, walkable communities, transit-oriented development, and the catch-all term “smart growth.”  There is also little consensus about how sprawl impacts everything from housing affordability and traffic to open space preservation and air quality.

One topic that has been reasonably well researched is the relationship between sprawl and traffic safety.  Sprawl appears to be a risk factor for traffic accidents, particularly serious accidents. This makes sprawl a public health concern. Given the direct relationship between vehicle miles traveled (VMT) and crash exposure, compact development patterns that generate lower VMT per capita would be expected to have lower traffic fatality rates. Conversely, sprawling communities, which are known to generate higher VMT per capita, should experience higher fatality rates.

Traffic fatalities, however, are rare events. Only 30 percent of crashes result in injury, and only 0.4 percent result in a fatality. A focus on fatalities in the existing literature may bias results against sprawl and in favor of compact development patterns. The extant literature sheds no light on the relationship between sprawl and the more common occurrence of property damage or injury crashes.

In a recent research, we updated the original county compactness index from 2003, developed refined indices that account for more relevant factors, and validated the indices against commuting data. Finally we sought to test the theory that sprawl generates more crashes of all types, not just fatal crashes. We found evidence that supports earlier research that suggests sprawl leads to more fatal crashes, but that also shows that more compact areas have higher rates of crashes leading to injury and property damage.

Our sample consisted of 994 metropolitan counties in the United States.  The sample included all major urban centers that collectively house 83 percent of the nation’s population. To test the theory that sprawl generates more crashes of all types, not just fatal crashes, we sought crash data from all 50 states and the District of Columbia. The individual state crash data were compiled into a national database that includes nearly 6.1 million crashes, 1.8 million injury crashes, and 30,000 fatal crashes. All types of crashes by all user types were included in our crash statistics. County crash rates per 100,000 population were computed by dividing frequency counts by population in 100,000s obtained from the 2010 U.S. Census.

Figure 1 – Causal Path Diagram for Fatal Crashes in Terms of County Compactness, VMT, and Other Variables 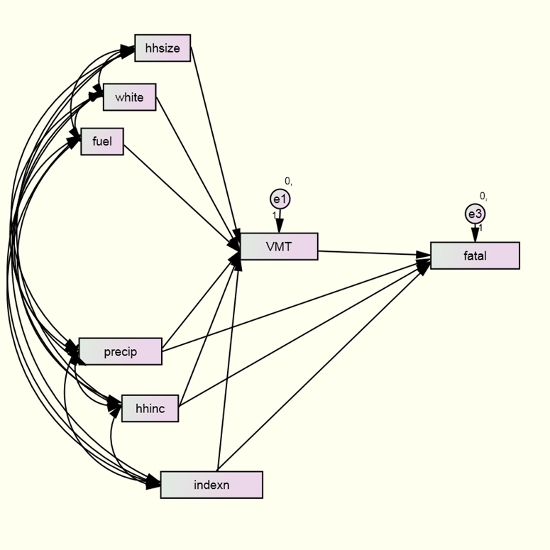 Consistent with the earlier literature, the compactness index was inversely related to the fatal crash rate, even after controlling for vehicle miles traveled (VMT) per capita. One possible explanation is that dense areas have lower travel speeds, which lead to less severe crashes.

The next analysis tested whether sprawling areas have higher or lower total crash rates than do compact areas.  Compact areas generate lower VMT per capita and hence less crash exposure than sprawling areas.  The indirect effect of compactness on total crashes is thus negative. At the same time, compact areas may have more fender benders due stop-and-go driving, even as they have fewer serious crashes due to lower travel speeds. The compactness index actually has a positive direct relationship to the total crash rate. We can envision concentrations of activity with lots of stop-and-go traffic causing many nonfatal crashes.

The final analysis tested whether sprawling areas have higher or lower injury crash rates than do compact areas.  We expected sprawling areas would have higher injury crash rates, but this was not the case. The compactness index has a positive direct relationship to the injury crash rate, and this overwhelms the negative indirect relationship through VMT.  Due to the large number of such crashes in our sample, and the intuitively plausible results for fatal crashes, we do not view this result as spurious.  Apparently the inherently large number of traffic conflicts in compact areas (mostly at intersections) result in more crashes of a serious nature but not so serious as to be fatal.

Our research confirms that county compactness is inversely related to the total traffic fatality rate. This is due to the lower vehicle miles traveled in a compact environment, and also possibly to the lower speeds of travel. Sprawl is both directly and indirectly a significant risk factor for traffic fatalities. More compact regional forms have the ability to reduce VMT to levels that also reduce population-level fatal crash incidence. The recognition of this relationship is key; as it adds traffic safety to the other health risks associated with urban sprawl, namely, obesity and air and water pollution. However, the strong relationships observed for fatal crashes do not extend to injury crashes or to total crashes, including those with property damage.

This article is based on the paper, ‘Urban sprawl as a risk factor in motor vehicle crashes’, in Urban Studies.

Reid Ewing – University of Utah
Reid Ewing is a Professor of City and Metropolitan Planning at the University of Utah, associate editor of theJ ournal of the American Planning Association, and columnist for Planning magazine, writing the bi-monthly column Research You Can Use. Earlier in his career, he was director of the Voorhees Transportation Center at Rutgers University, research professor at the National Center for Smart Growth, state representative from northwest Tucson, and analyst at the Congressional Budget Office.