White Americans are supportive of redistribution to foreigners of African descent, but for prejudicial and paternalistic reasons

White Americans are supportive of redistribution to foreigners of African descent, but for prejudicial and paternalistic reasons

Why are so many Americans supportive of giving aid to foreigners – especially in Africa? In new research, Andy Baker finds that Americans are more supportive of giving foreign aid to black foreigners compared to whites. By comparing respondents’ generosity towards blacks and whites in countries with roughly equivalent levels of GDP per capita, he finds that this difference in generosity is down to attitudes of racial paternalism, with Americans considering that black Africans are helpless victims, rather than active agents in their own development outcomes.

Social science has few, if any, findings that rise to the level of a hard and fast scientific law, but one that comes close looks at the role of cultural diversity and economic redistribution. In general, individuals are not very enthusiastic about economic redistribution if it entails redistribution across lines of ethnic or racial difference: People prefer to see their tax dollars spent “within the family,” so to speak. This would explain, for example, why the diverse U.S. has a smaller welfare state than the homogenous Scandinavian states, or why diverse U.S. cities have lower-quality public goods (e.g., education, roads) than its homogenous ones. Similarly, a host of studies on public opinion shows white Americans to be less enthusiastic about welfare payments to the poor if the payments are framed as going to African-Americans instead of to fellow whites.

But what about redistribution across lines of ethno-racial and international difference?  Every year, the U.S. federal government sends about US$30 billion overseas as foreign aid. Most of the world’s foreign poor are non-whites, so perhaps the meagerness of this sum—a mere 0.2 percent of GDP—stems from the same underlying dynamic: reticence to redistribute to entho-racial “others.” In recent research, I report on various empirical tests of this proposition. The results show precisely the opposite of what one might expect based on the social science consensus discussed above: White Americans are more supportive of foreign aid when cued to think about black foreigners than when cued to think about white foreigners.

I conducted two population-based survey experiments over the internet in 2011 and 2012 with white respondents. In one experiment, respondents began the survey by looking at a photograph of a poor, foreign family. One randomly chosen set of respondents saw a black family that they were told was Cameroonian, while another randomly chosen set saw a white family that they were told was Moldovan. Respondents were then asked a series of questions to gauge their support for foreign aid and their ideas about the foreign poor. Those cued with the Cameroonian family were more enthusiastic about foreign aid than those cued with the Moldovan family. In a second experiment, the design was similar, although this time the black family was reportedly from Guyana and the white family from Armenia. Again, those respondents seeing the black family at the start of the questionnaire were more supportive of foreign aid. 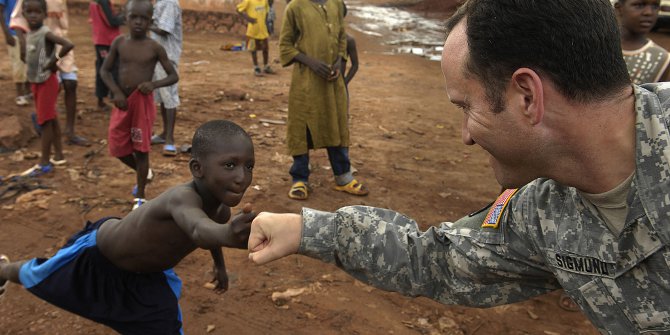 Does this mean, then, that racial prejudice does not exist in the realm of international economic redistribution? Unfortunately, the answer is “no.” The greater generosity among respondents in the black-family treatment groups is not due to greater material need in Cameroon and Guyana. In fact, the country pairings were chosen to hold objective need constant. At the time, Cameroon and Moldova had roughly equivalent GDPs per capita (as did the Armenia and Guyana pairing), and respondents were informed of the average income in the country of the family depicted in the photo.

Instead, the cause of the race-based difference in generosity lies in racial paternalism. Respondents in the black-family treatment groups were more likely to hold paternalistic attitudes toward the foreign poor—attitudes that effectively dehumanized them by downplaying their abilities to plan and follow through on efforts to develop and improve themselves. For example, those in the Cameroon and Guyana treatment groups were more likely than those in the Moldova and Armenia groups (respectively) to agree with statements like these: “When it comes to improving their economic standard of living, people in poor countries are like extremely sick or paralyzed patients; they are completely unable to help themselves.” Perhaps even more nefariously, respondents’ enthusiasm for aid to black foreigners did not exist when they were told that aid was given as cash “so that recipients can spend it any that they would like.” In other words, respondents liked aid to foreign blacks, but not when it did not have paternalistic strings attached.

It seems that American citizens have absorbed the dominant media narrative on Africa and the Caribbean, which emphasizes decimation from war, disaster, and disease. They thus conclude that the foreign poor of African descent are helpless victims in need of saving by the West, rather than active agents in their own development outcomes. In this instance, the near-scientific law on cultural diversity and economic redistribution is only half right: prejudice toward ethno-racial outgroups exists, but it need not always be accompanied by an uncharitable resentment. Of course, my point is not that all charitableness toward foreigners of African descent is prejudicial. Rather, it is charitableness (and media coverage) that downplays Africans’ status as participants in their own development outcomes that is troubling.

This article is based on the paper, “Race, Paternalism, and Foreign Aid: Evidence from U.S. Public Opinion” in American Political Science Review. Gated and ungated versions.