Budget rows in New York and Minnesota, Florida’s climate change ‘ban’, and Airbnb’s LA rental squeeze: US state blog round up for 7 – 13 March

Budget rows in New York and Minnesota, Florida’s climate change ‘ban’, and Airbnb’s LA rental squeeze: US state blog round up for 7 – 13 March

On Tuesday this week, NH Labor News argues that by voting for a business tax cut, the current GOP-controlled State Senate is putting business profits ahead of working families. They say that two new bills which would lower business profit taxes and the business enterprise tax will reduce state revenues by up to $80 million annually, and that that money could be used to build bridges, pave roads, repair schools, and employ people.

Moving south, Blue Mass Group of Massachusetts comments that the new state budget from Governor Charlie Baker is a ‘shell game’. They say that the budget numbers have been released so as to show that areas will have level funding, while Baker is planning to make cuts such as bringing in an early retirement program which will leave positions unfilled.

Rhode Island Public Radio reports this week that in an appearance to a local union group, Governor Gina Raimondo called on the state’s General Assembly to raise the minimum wage to $10.10, from the present $9. They suggest that the move may be a conscious effort on Raimondo’s part to mend fences with union groups after previously pushing for the overhaul of the state’s pension system.

New York’s State of Politics writes this week that Governor Andrew Cuomo has asserted that the state’s constitution gives him the power to link policy matters to spending in the state budget. Cuomo’s comments follow concerns from the state Assembly Speaker, Carl Heastie, who is worried that the state’s new ethics legislation have been linked to appropriations, including capital projects. 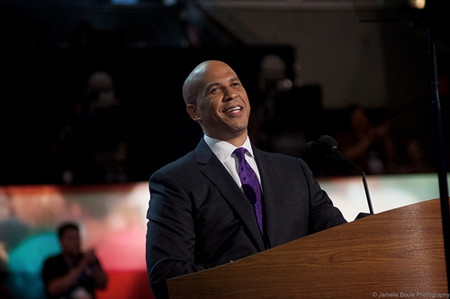 In New Jersey this week, Save Jersey says that the former mayor of Newark (and now Senator), Cory Booker has ‘disappeared’ from the city’s history, after a recent report found that Newark city government failed to charge millions in mandated health benefit costs. Booker is not mentioned at all in the report, despite having been ultimately responsible at the time. Staying in the Garden State, PolitickerNJ wonders how close Governor Chris Christie was to David Wildstein, a senior official in the Port Authority, who resigned in the wake of the scandal over lane closures on the George Washington Bridge last year. They say that photos and meeting reports involving Christie and Wildstein that have been emerging contradict Christie’s recent comments that the two had a ‘distant’ professional relationship.

On Friday, The Daily Signal reports that in West Virginia, the state legislature has overridden the governor’s veto of legislation that would ban abortion after 20 weeks. Earlier this month Governor Earl Ray Tomblin had vetoed the bill, which includes a 20 week ban on abortion in cases involving rape or incest, on ‘constitutional grounds’.

Moving down to South Carolina, FITS News writes this week that Governor Nikki Haley has ‘ripped’ members of the state House for proposing a massive borrowing bill, despite the fact that she herself proposed a similar bill two years ago. They say that this year’s proposed budget would borrow an estimated $500 million for infrastructure projects, including a $40 million training center for Boeing employees.

Florida was in the news this week after a report that employees of the state’s Department of Environmental Protection (DEP) had been banned from using the terms ‘climate change’ or ‘global warming’ since 2001. Saint Peters Blog says that an official from the DEP has stated that the story is not true, as had a spokesperson for the Governor, Rick Scott.

Moving west, Alabama’s Yellowhammer comments this week that hundreds of the state’s ‘dumbest’ laws may be soon getting the boot, as a new bill has been introduced into the legislature that will remove over 300 regulations that include a tax on turtle sales, and bans on running marathons and attending a bear wrestling match.

Oklahoma was also in the news this week, with two members of an Oklahoma University fraternity being expelled after a video emerged of them making racist chants. Freak Out Nation says that the fraternity had now hired a lawyer to consider a lawsuit against the university for shutting down the fraternity house.

In the Lone Star State this week, Hit & Run reports that a Representative has proposed that the filming of police by citizens be criminalized. They comment that given that the measure proposes a minimum distance of 25 feet for recording, this could mean that citizens would potentially be unable to document their own mistreatment.

eclectablog this week says that Michigan Governor Rick Snyder is continuing his assault on education by signing legislation that will divert nearly $170 million from the state’s School Aid Fund to fill a budget hole, and removing control of the State School and Reform Office from the state’s Department of Education and putting it under the Department of Technology, Management and Budget, which is under Snyder’s direct control. They comment that the moves betray his claims that education is at the top of his priority list.

In Wisconsin Political Heat reports that residents of Madison are mourning the death of black teenager, Tony Robinson, by a police officer in what they say are questionable circumstances. They say that while not much about the shooting is known definitely, it has happened at a time when too many people are being killed by U.S. law enforcement.

Heading west to Minnesota, True North writes on Monday that Governor Mark Dayton’s new budget is unsustainable, with what could end up being a 10 percent increase in spending to over $43 billion. They say that the budget has increased by around 200 percent since the mid-1990s.

On Wednesday, PoliticMO writes that members of the Missouri Legislative Black Caucus have accused state Republican leaders of stifling their bills that deal with issues stemming from the shooting of Michael Brown, a young black man, by a white police officer last year in Ferguson. The measures include placing body cameras on police officers and enhanced police training. Only one day later, Wonkblog reports that two police officers were shot in Ferguson, following the announcement that the city’s Police Chief, Thomas Jackson, would resign.

Outside the Beltway this week wonders what the matter with Kansas is, given that a new bill that allows teachers to be prosecuted for using ‘harmful’ lesson materials has been approved by the state Senate. They say that the law could open up teachers to fines and jail for using materials that some conservative legislators consider to be ‘pornographic’, including novels from Nobel Prize winning authors.

On Thursday, The Daily Signal reports on the regulatory tribulations facing yoga instructors in Colorado. They say that not only must yoga teachers be certified by the state, it costs the best part of $2,000 to do this. They comment that local government should do more to help these sorts of one-person small businesses, not cripple them with regulation after regulation.

This week Blog for Arizonan says that the state is failing the ‘moral test of government’, with the legislature proposing a ‘stealth’ budget behind closed doors overnight. They say that the ‘amoral’ budget is balanced on the backs of children and the poor, while preserving tax breaks for corporates and campaign contributors.

Recent years have seen the increasing popularity of the Airbnb website, which allows people to rent out their homes to tourists for a fee. According to California’s Capital and Main, Airnb is squeezing out renters in Los Angeles, where it has over 11,000 units. They say that a new report has shown that rents are rising twice as fast in Airbnb’s top ten neighborhoods in the city as they are citywide.

Blue Oregon writes this week that Oregon’s Secretary of State, Jeanne Atkins has announced that she will not seek a full term in 2016. They comment that, with this in mind, at least eight Democrats have expressed interest in running for Atkins’ job next year.

Heading north to Washington, Townhall comments that the city of Seattle’s adoption of an increased minimum wage, to rise every year until 2023, is a ‘slow-motion-accident’. They say that many restaurants in the city have already closed, and at least one manufacturer is to move some of its operations to Nevada, which has no income tax.

Hawaii’s Honolulu Civil Beat this week looks at how the state’s problem of low salaries might be overcome, in a state with relatively high housing costs.