Nearly half a million brownfield sites currently exist in the United States, many of which contain hazardous pollution that needs to be cleaned up to ensure the land can be developed safely. With developers often bearing the cost of this clean-up, state and federal government have put into place a number of financial incentives and liability relief to encourage development. Adam Eckerd and Roy L. Heidelberg write that in practice, private developers use these incentives to make profitable redevelopment projects more profitable, not to take on projects that they otherwise would not.

In the United States there are over 450,000, and potentially many more, known brownfields – properties in which the potential presence of hazardous materials impedes redevelopment, reuse, or expansion.Brownfields are diverse, ranging from shuttered dry cleaners or gas stations to large-scale former chemical manufacturers or coal yards. Most are located in urban areas, and the sites pose several problems, the smallest of which is that they can be an eyesore. Pollution can seep into groundwater or the air, affecting the health of nearby residents and, depending upon its severity, on an entire jurisdiction. Common pollutants at brownfield sites include asbestos, lead, petroleum, polychlorinated biphenyl (PCBs), and volatile organic compounds (VOCs) such as formaldehyde or benzene.

Properties often become brownfields when the business that was operating on the site closes down and, given the complex pollution remediation needs and potential liability issues, there is little incentive to purchase these properties. Consequently, brownfields often remain abandoned, generating nothing for the community and no property taxes for the local jurisdiction. Land values nearby are likely to decline as those who can afford to move away do so. These housing market effects can amplify poverty-related problems such as crime and joblessness. Brownfields, particularly in poor communities in need of economic development, need to be cleaned up to ensure efficient and safe use of land.

With so many sites needing cleaned up, governments lack the resources to fully address the problem. Federal approaches historically focused on providing financial assistance in locating potentially responsible parties (PRPs) and coordinating state and local cleanup funding. Since public funds are insufficient to cover cleanup costs, sites are unlikely to be cleaned up without identifying a PRP. Ideally this party can be located, is the polluter, and can be held liable. But this is rare. The firm that caused the pollution is often no longer in existence, and the pollution could have occurred decades ago. Thus, courts have determined that current owners can be held responsible for the cleanup costs of contaminants that they did not create, meaning that ownership presents the risk of unforeseen costs for cleanup or liability. This creates significant impediments to private sector involvement, and thus few sites are remediated. Those that are tend to be on valuable land, which is contrary to the goal of using brownfield remediation to bring needed development to communities.

Developers pushed for reforming liability rules and the offering of protection to promote more private sector involvement in projects. The policy response was to incentivize private sector involvement, shifting administrative functions from enforcement and compulsion to incentivizing the redevelopment of brownfield sites. To spur private sector involvement, Congress provided limited liability relief for site owners that did not cause the pollution. The law was modeled after state programs that emerged to encourage brownfield remediation through regulatory relief, liability relief, tax-related incentives, expedited permitting processes, supportive public infrastructure investments, and relief from the discovery of previous contamination or from future changes in regulatory standards. 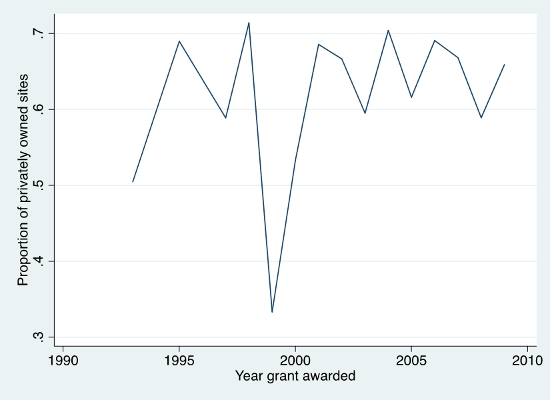 We see the redevelopment for brownfields as being in line with those who argue that private interests will become involved when they perceive economic promise regardless of public incentives. Private involvement is generally more likely in communities with higher home ownership, a large supply of vacant houses, comparatively lower poverty and smaller minority populations (particularly African Americans) – all conditions that have been found to be associated with gentrification. Developers are not typically the first investors in a neighborhood, tending to follow trends that have already begun and look for areas with high potential value. High vacancy rates along with high ownership rates may indicate transitional communities – the very sort of area that may be appealing as a potentially profitable investment regardless of public incentives.

Adam Eckerd – Virginia Tech
Adam Eckerd is assistant professor in the Center for Public Administration and Policy at Virginia Tech, where he conducts research on the complex relationship between government decisions and social outcomes, particularly with respect to environmental justice, public participation, and nonprofit organizations. He holds a doctorate from the John Glenn School of Public Affairs at The Ohio State University.