Since the Supreme Court’s 2010 Citizens United decision, which allowed corporations to make campaign contributions, much of the commentary on the ruling has centered on how it would affect election outcomes. But what has the impact been on policy outcomes? Timothy Werner argues that corporate managers will use the influence of their new spending ability to push for corporate governance laws that will protect their positions from competition. In new research which uses data from 38 states over 15 years, he finds that states are likely to pass one additional antitakeover law when corporate independent expenditures are allowed, and that this effect tends to occur when state legislators feel electorally vulnerable.

When the U.S. Supreme Court announced its ruling in Citizens United v. FEC in 2010, critics of the decision, including president Obama, argued that the independent expenditures allowed by the ruling would lead to corporations dominating spending on electoral campaigns.  As a result, much of the commentary on the decision, as well as the immediate academic work on it, focused on whether the decision would help Republicans (as business’ natural ally) in the 2010 congressional elections and beyond.  In contrast to this focus on elections John Coleman and I investigated what policy outcomes might shift as a result of the decision, and by exploiting variation in state-level campaign finance laws, we were able to investigate whether the ability to make independent expenditures allows firms’ managers to engage in politics in ways that benefit them at the expense of their shareholders.

We examine state-level relationships for two reasons:  first, even prior to Citizens United, some states allowed corporate independent expenditures to be made to influence their elections, and second, state governments control most aspects of corporate law, at least with regard to firms that are incorporated within their boundaries. We find that in states where corporate independent expenditures are allowed, additional antitakeover laws are passed which has the effect of entrenching and protecting corporate managers against the interests of shareholders.

Scholars of campaign finance primarily offer three theories for why firms engage in electoral politics.  The first and most straightforward views such activity as investment that will provide returns to the firm in either the short or long run.  This view informs the critics of Citizens United.  A second approach argues that political activity is not an investment, but rather a form of consumption by managers, principally because the money donated to a candidate from any single firm ultimately comes from the individuals who work there and is a relatively immaterial amount to both the candidate and firm.  The final view of corporate political engagement argues that this activity stems from the agency problem created by the separation of firm ownership and control and that, as a result, firms’ political activities can serve the interests of their managers and not their shareholders.

Our research stems from this last theory, and we believe the question we investigate provides the strongest test of the theory, as both the form of political spending and the policy outcome we examine are related to agency problems.  That is, the money for independent expenditures comes from the corporate treasury, which is clearly the shareholders’ money, and the policy outcomes we analyze are state-level antitakeover laws. We focus on antitakeover statutes as they have the effect of making it more difficult for a firm to be acquired by a buyer. Legal scholars largely view antitakeover statutes as entrenching managers by shielding them from the discipline of the market for corporate control, and as a result, these laws are perceived as being antagonistic to shareholders’ interests.

Figure 1 – Number of states with each antitakeover law 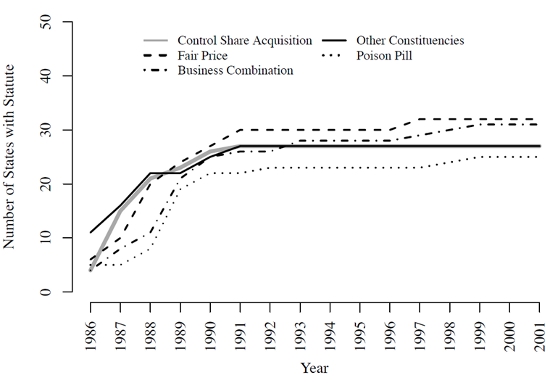 We find a significant and positive effect for allowing independent expenditures on antitakeover lawmaking, even after controlling for lobbying and other factors likely to affect the supply and demand for such laws.  On average, we find that states pass one additional antitakeover law (out of the five possible) when corporate independent expenditures are allowed.  This effect represents a 40 percent increase in the entrenchment of management, as the average state-year pair in our analysis only had 2.5 laws.

Additionally, beyond this main effect, we find that the competitiveness of state legislative elections moderates the relationship, with the effect of independent expenditures on antitakeover laws only being significant and positive when a state has reasonably competitive elections.  More precisely, as Figure 2 shows, the effect of independent expenditures (IEs) matters only when more than 22 percent of the seats in elections to a state’s lower chamber are competitive (we define each individual election as competitive if the winner of the legislative seat received less than 60 percent of the vote).  This circumstance applies in almost half of the election cycles we analyze, as the chart at the bottom of the figure reveals by displaying the distribution of electoral competiveness.  This suggests that the pressure to pass antitakeover laws that management can bring to bear via independent expenditures only works if legislators feel electorally vulnerable. 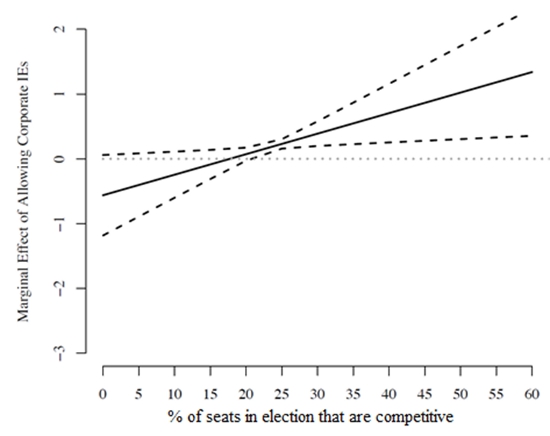 We believe that our findings have a number of important policy implications.  First, in contrast to our own earlier work in which we examined the effect of independent expenditures on state minimum wage rates, inequality, and policy liberalism; we actually uncover an effect for independent expenditures in this study.  This suggests that, consistent with the broader public policy literature, organized interests like business will have their greatest influence in specialized policy subsystems that govern over issues that are less important to people, such as corporate law.

The second policy implication is that one of the groups most affected by Citizens United will be shareholders, as managers can use shareholders’ own money to pursue policy outcomes that benefit management over ownership.  Although this may appear a relatively narrow problem given the doomsday-like predictions following the announcement of the decision in the case, over 50 percent of American adults own stock in publicly traded firms.  Further, because there are ways to engage in politics using independent expenditures at the federal level that do not require disclosure, it is difficult for individual investors or even institutional investors to monitor management’s political activity, much less attempt to control it, and this agency problem directly contradicts the Supreme Court’s casual dismissal of shareholder protection as a rationale for keeping the federal corporate independent expenditure ban in place.

This article is based on the paper ‘Citizens United, Independent Expenditures, and Agency Costs: Reexamining the Political Economy of State Antitakeover Statutes’, in The Journal of Law, Economics, and Organization.

Timothy Werner – University of Texas at Austin
Timothy Werner is an Assistant Professor of Business, Government & Society at the McCombs School of Business, University of Texas at Austin. His research interests include corporate political activity, non-market strategy, campaign finance, and private politics. In addition to a book published by Cambridge University Press, his work has appeared in leading journals in economics, management, and political science.