In 2001, the U.S. government gave a major tax rebate to Americans of $300 per person. In new research Paige Marta Skiba examines the impact of this rebate to those with outstanding payday loans, which can have annualized interest rates of up to 600 percent. In a study of nearly 47,000 payday loan borrowers, she finds that rather than using the rebate to pay back debt, most spent or saved their rebate, and did not decrease their loans by a large amount. She argues that while payday loans may appear to make financial sense for those who are unable to get credit from other sources, the onerous interest payments may help to drag them into a cycle of revolving debt.

In the US, April means tax season. This is often a time to take stock of our financial situations, including the decisions (good and bad) that got us where we are. For low-income households, tax season often means a large refund, which could be used to pay off debt or to make a big purchase. For 10 million such households, the past year has included borrowing on payday loans—small, high-interest loans that last just a couple of weeks. The typical borrowing level of $300 on a payday loan will cost around $50 in initial interest, meaning annualized interest rates are 400-600 percent. Most borrowers won’t just pay $50 in interest, however. In the typical loan transaction, a borrower “rolls over” the loan by making the initial interest payment, after which they will owe another $50 in interest on the date of their next payday.

An interesting quasi-experimental situation arose in the US in 2001, shedding light on how and why people use payday loans and these cycles of debt. In recent research, I studied the 2001 tax season, during which the federal government mailed checks to Americans in order to stimulate the economy. In a wave of mailings that autumn, most single people received $300 and couples $600.

The US government didn’t literally conduct an experiment, but their wave of mailings allowed me to use the data as if an experiment had been run. The timing of the checks’ arrival depended on the last two digits of borrowers social security number, an essentially arbitrary number. This, coupled with the fact that the stimulus checks were about the same size as a payday loan, allowed me to assess the reasons or motivations behind people’s use of payday loans. 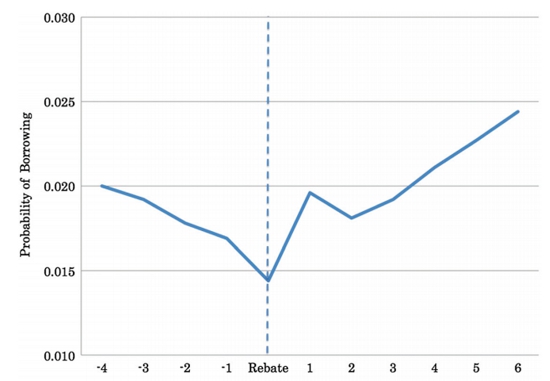 Source: Author’s calculations based on administrative data from a major payday lender. The vertical axis measures the mean probability of taking out a payday loan in a given week. The dotted vertical line marks the week the rebate was received.

Overall, my exercise reveals a small, short-lived impact of the tax rebate. Whatever consumers did with the sudden cash, the vast majority were not using it to retire payday loan debt. They appear to have spent (or saved) the money rather than paying off debt—good news, perhaps, for the policymakers who had hoped to stimulate the economy in the short run with tax rebates.

My broader research interest is in the financial lives of low-income households. A typical payday borrower earns just $20,000 a year and has borrowed half of her net biweekly pay; in this situation, making the triple-digit interest rate payments sounds like a challenge. But, despite their costs, payday loans can be perfectly rational. Theoretically, the loans could help borrowers smooth budget shortfalls they might experience between paychecks, resulting in an overall benefit despite the high interest rates. If, as lenders advertise, using the high-cost funds for, say, a car repair means the borrower has the ability to get to work tomorrow, the borrower could have perfectly aligned the costs and benefits and made a rational choice in taking out a payday loan. But do people really use payday loans in this way?

In another study, my coauthors and I found that payday loan borrowers have had a long history of financial problems, not merely a one-time budget imbalance like that created by the need for a car repair. In the time period leading up to their first payday loan application, people applying for payday loans have a long history of low and worsening credit scores in the bottom quartile of the US average (the equivalent of a 520 FICO score), of being maxed out their credit cards, and of having numerous delinquencies, as well as a history of undertaking intense searches for credit during this time. When they finally apply for a payday loan, it appears to make sense financially. But these borrowers likely do not anticipate how hard it will be to come up with half of their take-home pay plus interest in two weeks. The result is a cycle of revolving debt.

The interest rates of payday loans are regulated by state usury laws. The loans will soon also be the target of broader federal regulation, which will almost surely have the effect of curbing lending: just last month, the Consumer Financial Protection Bureau—the US federal agency that regulates payday and other types of consumer loans—said it will now require lenders to take into account borrowers’ ability to repay the loans when making lending decisions. Lenders might be surprised how difficult it is to find borrowers who can realistically repay.

This article is based on the paper, ‘Tax Rebates and the Cycle of Payday Borrowing’, in American Law and Economics Review.

Paige Marta Skiba – Vanderbilt University Law School
Paige Marta Skiba is an Economist and Professor of Law at Vanderbilt University Law School. She has conducted innovative research in the area of behavioral law and economics and commercial law, particularly on topics related to her economics dissertation, Behavior in High-Interest Credit Markets. Her current research focuses on the causes and consequences of borrowing on high-interest credit, such as payday loans, auto-title loans, and pawnshops, as well as the regulation of these industries.