Most people would agree that political parties are one of the most important components of national politics. But this is not the case in local politics, where candidates tend to run as individuals without party affiliation in races that many voters fail to participate in. Alex Garlick argues that adding party labels to candidates may be beneficial for these down-ticket races, as knowing candidates’ party affiliations will help inform voters’ decisions, and increase their likelihood of voting.

In a democratic system, elections are the primary opportunity for citizens to hold their representatives accountable. If the electorate disapproves of the performance of its government, it can replace officials through elections. However, it is not clear how elections should be structured to ensure they serve this function.

In the United States, the role of political parties varies in elections. Races for national office like the White House are partisan contests, where the candidates run as members of the Democratic, Republican or a minor party. But in most local races, candidates run as individuals without any party affiliation. There are major differences between these types of elections; for example, there is much more coverage in the news media about national politics compared to local, or even state politics.

In order to deduce the impact of party labels, I look to the state level, where elections are typically partisan. However, due to an historical quirk, Virginia did not label candidates according to their party for state-level elections until 2001. By looking at the elections that immediately preceded and followed this change, I found voters were less likely to skip down-ballot races with party labels. American ballots are typically structured with major races (e.g. president or governor) at the top of the ballot. Following the major races there are a series of elections for smaller jurisdictions below; many voters fail to complete this portion of the ballot. Non-completion of the ballot is termed roll-off, and party labels reduced roll-off by about fifteen percent in contested state legislative races. This boost in participation was especially true in areas with more African-American voters. Roll-off was higher in precincts with more African-Americans before the reform, and those areas experienced a greater reduction after the labels were applied.

Party labels made voters in state level races behave more as national partisans. This behavior is shown in Figure 1 by a greater association between the two-party vote share of Republican state-level candidates and the vote share of George W. Bush, the Republican candidate in the 2000 presidential general election. 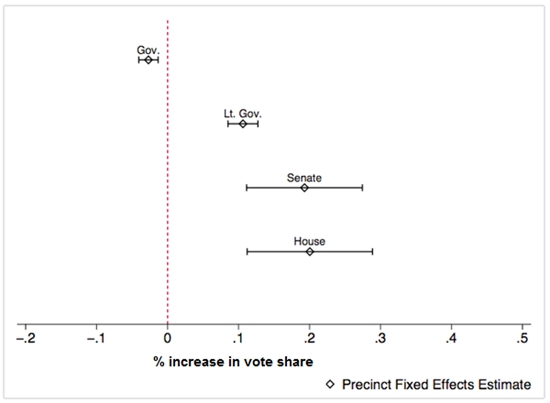 Note: Figure 1 shows the effect of a 1 percent increase on the precinct’s vote share for George W. Bush on the vote-share of down-ballot candidates. Bars indicate 95% confidence intervals.

These results suggest that party labels are beneficial for down-ballot elections.

The increase in participation is a good thing. Having more citizens participate in the electoral process broadens and deepens our democracy. This is especially true for a minority population, like African-Americans in Virginia. Elsewhere in the United States today, a number of different states have instituted election policies that limit participation, like voter identification laws. My analysis suggests that making an election non-partisan could have a similarly dampening effect on participation.

However, nationalized voting in state and local elections would be a legitimate concern if it was just the result of blind party voting. For true accountability, voters should be reacting to performance of government officials, and not just voting based on the letter after a candidate’s name.

The evidence suggests this was not the case. Returning to Figure 1, the lack of a nationalization effect for Governor suggests that adding party labels did not lead to blind party voting. It only led to party voting for elections the voters knew less about, those that were not at the top of the ticket.

Returning to the point about the information level, if we judge a correct vote as one being made under conditions of full-information (so that people vote for the candidate who aligns best with their beliefs and interests), as the political scientists Richard Lau and David Redlawsk do, then voting with party labels is more correct. This matters for accountability. Even though voters may not know much about the candidates on the ballot, they probably know how they feel about that candidate’s party. Partisan elections give voters a chance to update their beliefs about the parties in context of state, local or judicial races.

There are other consequences of partisan contests for the way campaigns are conducted or the way legislators behave in office. However, as detailed by the political scientists Brian Schaffner and Gerald Wright, parties tend to add order to conflict in legislatures, which also makes it easier for the electorate to hold its representatives accountable.

Ultimately, it is unfortunate that voters often hold precious little information about the candidates they are considering for state and local elections. We need to come to grips with this reality and provide as much information to the electorate as we can. Therefore the informational value that can be conveyed by a party label is good for the process. Partisanship may not be the best thing in the local context, but it’s better than the alternative.

This article is based on the paper, “The Letter after Your Name” Party Labels on Virginia Ballots’, in State Politics & Policy Quarterly.

Alex Garlick – University of Pennsylvania
Alex Garlick is a Ph.D. candidate in American politics in the political science department at the University of Pennsylvania. His primary research interests are legislative institutions, electoral institutions, federalism and political parties. His research has been published in State Politics and Policy Quarterly and his commentary has been published in the US News and World Report.