This week saw President Obama push Congress to grant him the Trade Promotion Authority that would give him the ability to complete free trade negotiations for the Trans-Pacific-Partnership between the U.S. and eleven countries in the Asia-Pacific region. Obama had public disagreements this week with some in his own party over the trade deal. Wonkblog writes Monday that the President had ‘harsh words’ for Massachusetts Senator, Elizabeth Warren, rejecting her claims that the deal would undermine financial regulation and also accused her of playing politics.

PoliticusUSA comments this week that President Obama has failed to learn from his, and the Department of Education’s mistakes, in the area of charter schools. They say that both Republicans and the Obama administration love to ‘pander’ to the charter school industry, with the latter recently asking Congress to increase funding for charter schools, despite the fact that the program is an ‘abject failure’ in their view.

Moving to the party more generally, the Monkey Cage looks at recent research which has found that black people in the U.S. have ‘excess mortality’ – that is that they tend to die sooner because of health inequalities compared to whites. They say that this trend among blacks may have cost the Democratic Party seven Senate elections and 11 gubernatorial elections between 1970 and 2004 through lost votes. Staying on the Democrats, The Federalist writes Wednesday that the party has become Elizabeth Warren’s (mentioned above), as evidenced by her anti-trade influence in the Senate which caused President Obama headaches this week.

Moving on to the Republican Party, Hit & Run discusses the party’s inconsistency over its limited government principles in the context of a bill in Congress which would impose a 20-week term limit on abortions. They say that despite the fact that the Constitution does not empower Congress to regulate state medical procedures; Republicans are still likely to press on and violate their principles when they conflict with their political agenda. The Atlantic meanwhile looks at the GOP’s ‘amnesia’ over the Iraq war, after presidential hopeful and former Florida Governor, Jeb Bush’s statement that he would have supported the war knowing what we know today. They comment that the conservative wing of the party is ‘furious’ with Bush’s comments because they know that in order to win the presidency, they must nominate a candidate who can keep their distance from Iraq.

On Sunday, Daily Kos comments on laws which keep citizens of U.S. colonies from voting. They say that across places like Guam, American Samoa, and Washington D.C, more than 4 million U.S. citizens cannot vote, due to these people not enjoying full citizenship rights because of a century-old law.

Looking towards the 2016 Congressional elections, National Journal says that the Democratic Party needs former Wisconsin Senator, Russ Feingold to win back his seat from Republican Senator Ron Johnson. If Feingold, who announced his candidacy this week, wins then it will be that much easier for the Democrats to re-take the Senate.

Turning to general commentary on the 2016 presidential election, Outside the Beltway writes on Sunday that the election is likely to be close, but noncompetitive, with only seven states in real contention. They argue that the polarization currently showing in the Electoral College means that it is not only undemocratic, but also unhealthy. National Journal meanwhile, reports that despite the election being many months away, the GOP and their allies are already buying up the most valuable online ad space.

Highlights from the Democratic side of the 2016 race this week include:

Heading over to the Republican field:

On Tuesday, The Daily Signal looks at why government forecasts make Social Security look more secure than it actually is. They argue that Social Security forecasters have consistently overstated the well-being of the program, and their prediction that its funds will run out in 2033 does not make realistic assumptions about birth rates and life expectancy, meaning that funds may run out sooner. Hit & Run, meanwhilereports that the Veterans Administration (VA), has been wasting $6 billion a year in violation of federal contracting rules, all while asking for more and more money.

Moving on to the House of Representatives, Outside the Beltway writes Thursday that House Republicans were able to pass the bill (mentioned above) which would ban abortions after the 20th week of pregnancy, a law which may well be unconstitutional. On Thursday, The Atlantic reports that the House passed a bill this week that would end the National Security Agency’s bulk-data collection program, following a Circuit Court of Appeals decision last week that the collection program had not been authorized by the Patriot Act. Crooks & Liars bemoans Congress’ ‘bad timing’ after a House draft appropriation bill this week proposed to cut $300 million of Amtrak’s funding, just after a horrific train crash which killed eight people.

On Tuesday, President Obama lost an important Senate vote to debate fast-track trade legislation, 53 – 34, with many Democrats against the measure, reports Daily Kos. Obama’s defeat was relatively short-lived, says The Atlantic, with lawmakers making a deal Wednesday which would see votes to crack down on currency manipulation and give preferential treatment to imports from African countries, on top of the bill to give Obama trade promotion authority. Staying in the Senate, Wonkblog writes that the Senate Banking Committee is looking to increase Congressional oversight over the Federal Reserve, with proposals to give the Fed’s regional presidents more power, and require the head of the New York Fed to be nominated by the president and confirmed by the Senate.

Informed Comment wonders why neither the U.S. nor Israel is willing to ratify the Comprehensive Nuclear Test Ban Treaty, while at the same time pushing for sanctions against Iran over that country’s nuclear program.

On Monday, The American Prospect says that we should ’re-litigate’ the 2003 Iraq war in the 2016 campaign, in light of Jeb Bush’s recent comments on the topic. They say that candidates like Hillary Clinton will need to explain how the Iraq War will inform her thinking about the foreign policy challenges which face the next president. Talking Points Memo comments that Jeb Bush has triggered an ‘Iraq War watershed’, with GOP hawks now stating that it was a mistake –something which shows that the debate over the war is really now over.

Meanwhile, the White House Dossier reports that the Obama administration has pushed back hard against the notion that the cancellation of Saudi King Salman’s meeting with President Obama is a ‘snub’. They say that the message, even if the White House is denying it, is that Saudi Arabia is unhappy with the current deal being struck with Iran.

This week also saw a story published in the London Review of Books which claims that the Obama administration lied about the details of the raid against Osama bin Laden four years ago. The Daily Signal says that the article is a distraction from the problematic terrorism policies of Pakistan, which has also received nearly $30 billion in U.S. economic and military aid over the past 13 years.

On Sunday – Mothers’ Day – The American Prospect argues that if the U.S. really cared about mothers, then reproductive healthcare would be available to all. They say that maternal death rates are higher in the U.S. than in 40 other countries, and that abortion is not easily accessible in many states. Later in the week, Daily Kos reports that the Obama administration has released new guidelines that stipulate that insurers must provide a full range of birth control options at no cost to consumers.

On Monday, The Daily Signal says that the Affordable Care Act (ACA) introduced new regulations that have actually made health care more expensive, and that the law’s subsidies were intended to mask the effects. They argue that removing the ACA’s three mostly costly insurance requirements, the age rating restrictions, benefit mandates, and minimum actuarial value requirements, could reduce premiums for less expensive plans by up to 44 percent.

On Saturday, Daily Kos looks at where the U.S. currently ranks on the minimum wage – 27th out of 29 countries. They say that it would move up to 11th place, if there a $12 minimum wage was instituted by 2020. Low wages are undoubtedly a major influence on poverty in America, though Representative Darrell Issa (R-CA), the wealthiest member of Congress, seems to think that the country’s poor are the ‘envy of the world’, from his recent comments. Outside the Beltway reports that Issa made the comments during an interview with the CNNMoney program. For many, playing the lottery may be one way that people believe they can get out of poverty. The Atlantic comments this week on ‘America’s $70 billion shame’, writing that in the 43 states where lotteries are legal, Americans spent more on them than the entire country did on sports tickets, books, movie tickets, and recorded music sales.

Last week President Obama made a plea for the Trans-Pacific-Partnership whilst visiting a Nike factory in Oregon. Wonkblog says that while Nike has stated that the trade deal may help the company to create 10,000 engineering jobs in the U.S. these will only be replacements for the workers it has been losing in recent years.

On Tuesday, Americablog looks at a new report on religious affiliation which has found that all major Christian denominations have seen declines in their population share, with the overall falling from 78.4 percent to 70.6 percent between 2007 and 2014. They say that this fall should come as no surprise, as ‘Christian’ is increasingly being associated with ‘socially conservative’. Townhall meanwhile, argues in favor of free speech in the wake of the shooting last week at a contest to draw Mohammed in Dallas, Texas organised by anti-jihadist blogger, Pamela Geller.

Sabato’s Crystal Ball has a quiz which asks you to match the presidential candidate with their home town, from Abilene to Yorba Linda.

Wonkblog has a helpful map which shows where in the U.S. it’s cheaper to buy than rent.

More seriously, The Volokh Conspiracy examines whether or not the U.S. is a Republic or a Democracy.

Silver’s Senate forecast, Obamacare’s court challenges, and is Rand Paul the future of the GOP? – US national blog round up for 22 – 28 March 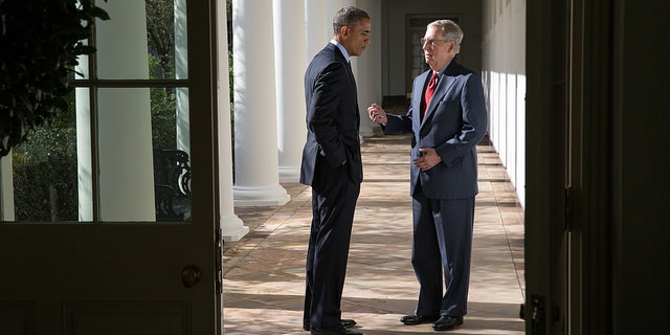 Obama moves towards immigration action, Obamacare subsidies under threat, and the quiet end of Ebola panic: US national blog round up for 8 – 14 November

GOP surrenders on the debt ceiling, Obamacare’s employee mandate is delayed, and Jeb Bush for 2016? – US national blog round up for 8 – 14 February