In New York State this year, the legislature has already seen the resignation of its Assembly Speaker and Senate Majority leader over allegations of corruption. But how prevalent are legal forms of patronage in the government of the Empire State? In new research which looks at earmarking in New York, Yonghong Wu and Daniel W. Williams find that the smaller Republican controlled Senate has allocated far more money than the Democratic controlled Assembly.

There are two major forms of earmarks: one is associated with revenue policy while the other is associated with patronage. Revenue policy earmarks designate a particular use of a revenue source, for example lottery revenue could be designated to fund education. Patronage earmarks involve legislative designation of the end recipient, often a contract awardee, of appropriated money. In the United States, this form of earmark is sometimes called “pork barrel” spending and it is thought to be associated with corruption.

Over the last decade, New York State has seen many legislative members, including leaders, charged with, and often convicted of, corruption. The state Assembly Speaker, Sheldon Silver, was charged with corruption related crimes in January 2015, and the state Senate Majority Leader, Dean Skelos, was similarly charged in May. In the most glaring recent example of patronage corruption, State Senator Pedro Espada, switched party allegiance twice in 2009 to attain the role of Majority Leader and then sought to direct patronage earmarks to an organization he controlled. In 2012, he was convicted of corruption related crimes related to that organization.

In New York State, overt earmarking is found in a budget category called the “Community Projects Fund.” New York State, and perhaps other state and local governments, may be especially vulnerable to patronage earmark corruption because in contrast with the US Congress, the New York State legislature exhibits a weak link between committee structure and earmarking. As a consequence, more power is concentrated with the chamber leaders.

In other respects, the New York State earmarking practices in the Community Projects Fund are similar to those of the US Congress. Members of the majority party receive substantially more earmark funding than do members of the minority party. Earmark funding is associated with the length of legislative term in office. In the Senate, there is more funding for legislative leaders; while in the Assembly, there is more funding for members of the Ways and Means Committee. 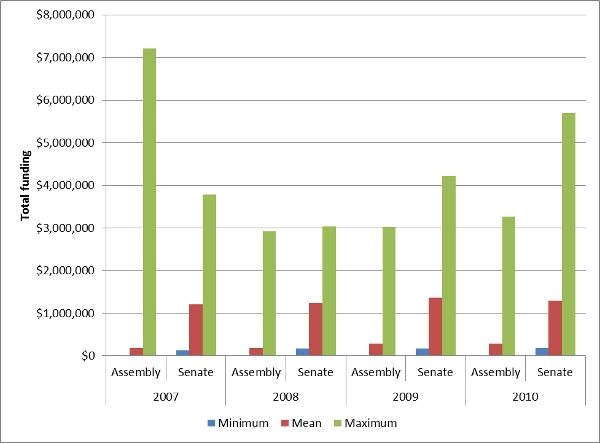 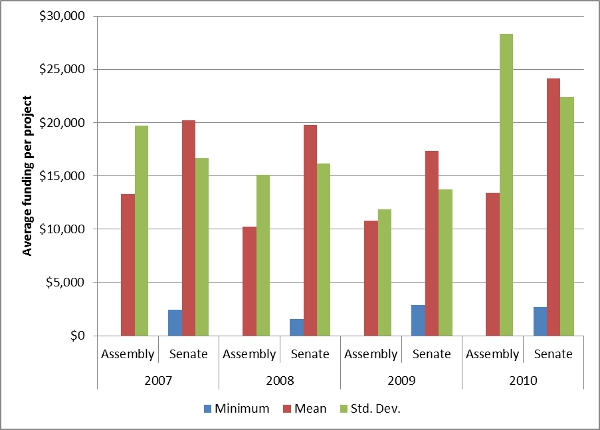 For most of the years studied, the majority party for the New York State Senate has been Republican, while the majority for New York State Assembly has been Democratic throughout this period. The Senate has 62 members, while the Assembly has more than twice that number at 150. Even adjusting for this, the Senate allocates much more money per member for Community Projects.  These phenomena suggest a partial explanation for one finding: Republicans receive about twice as much earmark funds as Democrats. The dollar advantage results from being in the majority in the smaller chamber.

In recent years, the Governor has eliminated New York State’s Community Projects Fund in the proposed budget. However, less transparent earmarking remains. This change, which is publicly discussed as a reform, could have the opposite effect, making this practice less visible to voters and monitors.

We were able to study these New York State practices because recent open government reforms have led to detailed publication of Community Projects Fund commitment via the Internet. However, these sorts of reforms appear uneven. The availability of the same sorts of data in other localities could contribute to a much more complete understanding of subnational earmarking. Other idiosyncratic characteristics, such as the use of the term “Community Projects Fund,” often require research engagement by local researchers.

This article is based on the paper, “State Legislative Earmarks: Counterparts of Congressional Earmarks?” in State and Local Government Review (forthcoming).

Yonghong Wu – University of Illinois at Chicago
Dr. Yonghong Wu is an Associate Professor in the Department of Public Administration at the University of Illinois at Chicago. His fields of specialization include state and local public finance, and science and technology policy. Dr. Wu’s research agenda is composed of two components: one component explores public finance issues in science and technology policy arena; the other addresses state and local tax policy-making.