In the U.S. today, driving is easy, accessible, relatively affordable, and convenient. But Americans’ reliance on the car has huge impacts on CO2 emissions and encourages unsustainable urban sprawl. Camille Kamga writes that making better and more efficient cars is not the answer to these problems; he argues that more, better, faster rail services are needed. These kinds of investments will take advantage of emerging trends away from driving and car ownership and will help to decarbonize America’s transportation.

The United States was mostly built after the rise of the car, meaning that fewer options for mobility are available and using private cars for daily trips has been the top mode choice and in some areas, the only choice available to travelers. The predominance of cars for transportation in the U.S. has been reinforced by government policies and a vast infrastructure built over many decades that cater to road travel. Government policies support driving by financing roads, highways, and other infrastructure, supporting the auto industry, and through incentives such as gas prices kept artificially low due to a federal fuel tax that has not been raised in 20 years. The privileged position of cars has detracted from the development of more environmentally friendly transportation options and created a national landscape built for cars. Driving is easy, accessible, relatively affordable, and convenient. Add to all of these conditions a culture saturated by media and advertising whose message is that cars are cool, and it is not surprising that when Americans go to work, to play, or to shop, they drive.  Nearly 90 percent of all U.S. passenger trips are taken in private road vehicles. This heavy usage contrasts with just 50 percent of trips in Europe taken by car and 15-30 percent of such trips in the developing world.

Americans enjoy the use of highly convenient and relatively affordable cars. Yet Americans also pay a high social and environmental price for their heavy car use. Some of the detrimental effects are related to cars themselves, while others are a byproduct of the infrastructure built for cars. Cars determine the layout of towns and cities, and they structure how people spend their time and money even when they are not mobile because cars affect the air people breath, the water they drink, and their fitness and health. The costs of car dependence are both short- and long-term, and with its energy expenditure and CO2 emissions, a matter of both local and global concern.

For decades, the effects of emissions leading to global and local air pollution have been recognized as negative consequences of automobile use. The current transportation system in the U.S. has broader problems than just the vehicle emission as they include a high death toll on its roads and the negative health, environmental, economic, and social costs of an over-paved landscape and unsustainable sprawl. With an historical average of one death every 13 minutes, the U.S. leads Western nations in the total number of traffic fatalities. Despite the huge capacity of U.S. highways and roads to accommodate the high level of trips, the number of cars on the road regularly overwhelms the system, leading to congestion. Heavy automobile traffic leads to delays, lost time, stress, inactivity, and wasted fuel, and, according to one estimate, an additional 56 billion pounds of CO2 emissions per year.

A common response to highway congestion has been to add more lanes and roads, even though studies have shown that adding capacity simply draws more traffic. This phenomenon, known as induced demand, is acknowledged in theory but often ignored in practice. Currently, most efforts to resolve the problems of energy, emissions, and the negative health effects of transportation are being addressed not by rethinking the system and developing a more balanced, multimodal system, but by improving the efficiency of car design and operation. These efforts include developing more sustainable vehicles, increasing fuel efficiency, exploring alternative fuels, promoting more efficient driving techniques, and developing safer vehicles, including driverless cars.

Alternative fuels, electric cars, energy-saving behaviors and other measures are important innovations. However, achieving sustainable transportation and meeting the mobility need will take more than remediating the existing system with better fuel and vehicle technologies, eco-driving, eco-flying, and other similar efforts. These efforts are insufficient to right the current transportation imbalance and instead only add more of what already doesn’t work: more roads, more cars, more airports, more planes, more congestion, and more underfunded trains that chug along on marginal tracks. Nor will these efforts be sufficient to end U.S. dependence on fossil fuels, whose full carbon costs are coming due as global warming continues unabated.

Technological improvements that remain within the existing paradigm are insufficient to address what are much larger systemic energy and environmental challenges. A European Union study concluded that only a third of the cuts needed to reduce GHG emissions to 90 percent of 1990 levels by 2050 could be achieved by technology alone. In the United States, with fewer mobility alternatives than Europe and an expected 7.3 percent population growth rate, a more fundamental structural change will be required to cut oil use and emissions in transportation.

In a recent work, I argue that addressing all of these concerns can be accomplished by replacing the high dependence on cars and the high environmental costs of planes with alternative modes, including trains and high speed rail (HSR). Already, significant sectors of the public are showing more interest in trains, transit, biking, intercity buses, and walking. A transportation paradigm shift is underway in the United States as travelers move away from cars and planes and toward other forms of mobility, including rail. As Figure 1 shows, Americans across all age groups and young Americans in particular, are losing interest in driving and owning cars; instead, they are taking conventional trains, riding buses, sharing cars and biking. Baby boomers are rethinking the car-dependent lifestyle they grew up with and moving away from car-reliant suburbs. These two large demographic groups want access to more transportation choices, a trend that is forcing planners to re-think the current imbalance of the U.S. transport system. 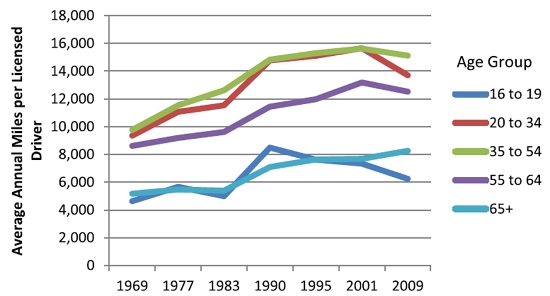 Rising Amtrak ridership, shown in Figure 2, up even without HSR, points to a growing market for the kind of fast and reliable intercity rail service that HSR could provide. HSR could be the first transportation infrastructure project built by a generation grounded in the principles of livability and sustainability. In the U.S., HSR could complement cars, planes, and conventional rail and help ensure that each mode is used in its most efficient and sustainable niche. 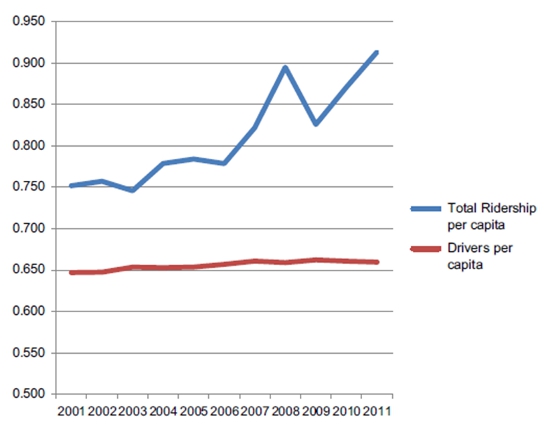 HSR’s capability to help reduce energy and emissions costs goes beyond its low-carbon electric service to include the way its intermodal hub stations serve as catalysts for urbanization. Growing urban density reduces the need to drive and raises the efficiency of transit. It helps move Americans out of their fossil-fuel based, internal-combustion, single-occupancy vehicles and onto more sustainable public transportation services and sidewalks. By investing on the expansion of passenger rail and HSR, the U.S. not only will begin to meet new travel demands of Americans of all age groups in general, more importantly for young Americans and baby boomers, but it will fully embark on the process of decarbonizing the nation’s transportation and takes a major step toward ensuring a more sustainable future.

This article is based on the paper ‘Emerging travel trends, high-speed rail, and the public reinvention of U.S. transportation’, in Transport Policy.

Camille Kamga – City College of New York
Camille Kamga is an Assistant Professor of Civil Engineering at the City College of New York and the Director of the University Transportation Research Center (UTRC) – a consortium of 19 U.S. academic institutions. He is leading UTRC in innovative research, education, and technology transfer programs; addressing issues of urban mobility and sustainability; as well as concepts and technologies related to Big Data applications to transportation and traffic engineering.