Last November, President Obama caused outrage among conservatives by using his executive authority to give legal reprieve to many undocumented immigrants. White House Dossier reports Tuesday that a panel of federal appeals court judges has declined to reverse an earlier ruling from a district court judge which blocked the executive action. They say that the Obama administration is likely to appeal, but that it is uncertain whether the case will go all the way to the Supreme Court. On Wednesday, Daily Kos says that the White House is increasing pressure on the Senate to find a way to save the Patriot Act, before its provisions which allow the National Security Agency (NSA) to collect telephone meta-data run out on Monday. They comment that the NSA’s program is overdue for reform and oversight.

Moving on to the Democratic Party more generally, Ten Miles Square looks at new data which shows that Congressional Democrats have become more ideologically homogenous than their counterparts in the GOP. They comment that as Southern and rural whites have continued to abandon the party, it has grown more and more ideologically cohesive. 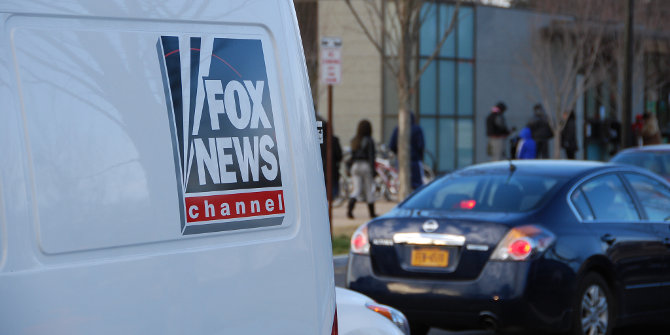 Turning to the Republican Party, PoliticusUSA points out that the party has passed precisely zero jobs bills over the 140-odd days it has had control of Congress, compared with five attempts to repeal or undermine the Affordable Care Act.  Crooks & Liars meanwhile covers a CNN interview with Bruce Bartlett, a former adviser to Presidents Ronald Reagan and George H.W. Bush. In the interview, Bartlett warned that Fox News has damaged the Republican Party by creating a bubble for conservatives to ‘brainwash themselves’. On Wednesday, The Atlantic examines what they say is the GOP’s embrace of ‘anti-Islamic’ bigotry. They say while American politicians have become less overtly bigoted towards most minorities, Muslims are still an acceptable target, at least for Republicans.

This week, RedState looks ahead to 2016’s Senate races, writing that the Democratic Party is likely to have a weak bench going into the election. They attribute this problem to the Democrats’ using President Obama’s election victory to push an agenda that was far too aggressive for voters and then not fielding more moderate candidates in the wake of their defeats in the 2012 and 2014 Congressional elections.  Roll Call’s Rothenblog says that out of only 14 open House seats going into next year’s elections, only four are really competitive for either party.

Moving on to the 2016 presidential race, The Atlantic has a new cheat sheet of declared and undeclared presidential candidates from both sides, including links to candidates’ ‘404’ pages on their websites, some amusing, some not.

On Thursday, Political Animal covers what they call ‘the poll from hell’ for the GOP’s presidential field. Why this sobriquet? Five candidates are all tied on 10 percent. Turning to some of these candidates (and some others):

Moving on to the Democratic field:

The big news out of the Supreme Court this week was its decision to accept a case for review which would decide the meaning of “one person, one vote”, by resolving if districts should have the same number of people or the same number of eligible voters. Outside the Beltway writes that the Court’s decision is likely to spark a new round of litigation over Congressional redistricting after the 2020 census. Monkey Cage, meanwhile has two helpful maps which show where changing the way districts are determined would matter the most – voters in areas with a substantial number of people under 18 would have power.

On Wednesday, The Hill’s Congress Blog writes that two years on from the country learning of the Internal Revenue Service (IRS) targeting of conservative political groups, the agency remains ‘reckless and corrupt’. They say that not only is the IRS still targeting such groups, it is also subsidizing the green energy industry against Congress’ will.

Moving on to the House of Representatives, Hit & Run wonders if Florida Democratic Representative, Alan Grayson actually is the most awful representative on the Capitol. 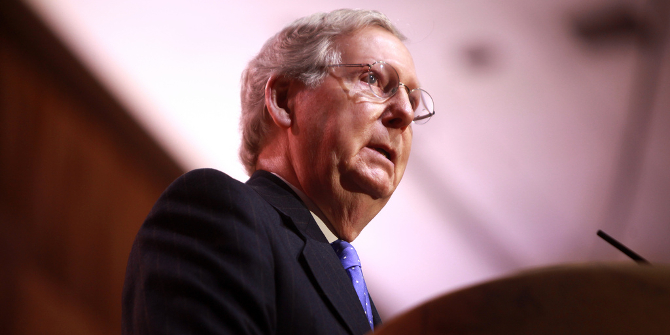 On Tuesday, Monkey Cage examines why the GOP Senate Majority Leader, Mitch McConnell is unable to keep the promises he made when he took over the Senate earlier this year. They say that McConnell’s oft-criticized parliamentary practices reflect the partisan hand he was dealt – a strongly polarized legislature that means that he has to resort to cloture to limit debate and amendments. Hit & Run says that this week the Senate failed to pass the USA Freedom Act, recently passed by the House, which would have restrained the NSA’s mass data collection program. They also report that there were even fewer votes for the extension of Section 215 of the Patriot Act (supported by McConnell) which would extend the data collection without any changes.

On Saturday, The Daily Signal has five steps that the next president could take in order to boost the U.S. relationship with Latin America. Step One: “Support a principled, human rights-based policy toward Cuba”.

Last week saw the GOP tie itself in knots over the question of whether or not it was right to have invaded Iraq in 2003. The Federalist argues that presidential candidates should support the invasion, and that the past 12 years would have been worse with Saddam Hussein still in control of the country.

On Tuesday, Townhall argues that the U.S.-Iranian cooperation to defeat the Islamic State makes sense, writing that the U.S. cannot defeat IS alone, and that Iran has the military power to do so.

The American Interest this week looks at China’s ‘furious’ reaction to the backlash against its territorial plays in the South China Sea. They say that it has blasted the U.S. over its flights over what China says are exclusion zones around artificial islands which it has created.

Much has been made about the Republican Party’s lack of an alternative to Obamacare. This week FreakOutNation says that Senator Chris Murphy (D-CT) introduced the symbol, “¯\_(ツ)_/¯”, indicating a shoulder shrug, into the Congressional record, describing it as a summary of the GOP’s Obamacare plans. In a similar vein, Political Animal wonders if there is any real interest in fixing Obamacare amongst Republicans, if its state subsidies are thrown out by the Supreme Court later this summer. RedState, meanwhile looks at what they say is a ‘terrible’ idea – that some states could merge their failed Obamacare exchanges in order to cut costs.

The Atlantic has a close look at a new barrier to women getting an abortion in some states- a state mandated extended waiting period between deciding to have the procedure and getting one. They say 26 states now have such delays, and that they may well make even costlier to have an abortion.

On Memorial Day this week, The Federalist wonders whether it is disrespectful to celebrate the occasion, given that it is a means to better remember the country’s war dead.

On Tuesday, Wonkblog has an interesting story on the crisis of Puerto Rico’s healthcare system, which may be near collapse. They say that 400 of the island’s 11,000 physicians leave every year due to low Medicare and Medicaid reimbursement rates.

In response to Congress’ failure to pass a comprehensive transportation funding bill, The Hill’s Congress blog says that it is time to end the government’s role in highway funding. They advocate for the federal gas tax to be phased out in favor of state and local government taxes and interstate tolls. 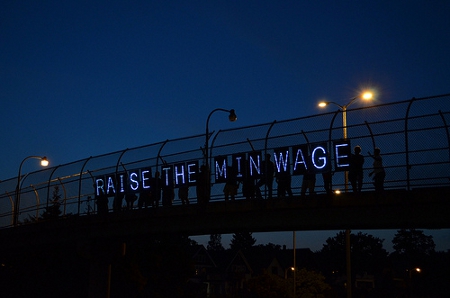 Last week the city of Los Angeles brought in a $15 minimum wage. Townhall discusses the costs of raising minimum wages, arguing that while the intentions behind such increases are good, they will lead to reduced employment and business closures. Also writing on employment matters, Hit & Run writes Tuesday that while family leave policies are supposed to help women, they actually trap them by making it harder for women to earn more and rise higher in the workplace.

Wonkblog maps the price of marijuana in every state, with those that have legalized the drug unsurprisingly enjoying lower prices compared to those which have not.

Hit & Run reminds us of the time that President George W. Bush offered to officiate a lesbian wedding.

After leaving their loaded guns in public bathrooms, Capitol police are going to get some toilet training (Daily Kos).