Does participating in high school athletics programs help or hinder students from getting good grades? In new research, Ryan Yeung finds a link between academic achievement and athletic participation in high school. Using data from a study begun in 1980, he finds that those students who were athletes or athletic leaders had grades between 8 and 13 percent higher than those that were non-athletes. He argues that the skills developed as a participant or leader on an athletic team are also useful in the academic sphere.

In recent research I examine this iconic aspect of American education and find that there are achievement benefits to participation in varsity athletics as well as to leadership on varsity on teams, though these benefits are focused on Caucasian and female athletes.

Estimating the effect of school athletics on student outcomes, in this case, performance on standardized test scores is not a straightforward matter – student-athletes are not a randomly selected group. How do we know that it is participation in school sports that results in higher test scores, and not the things, observable and unobservable, associated with student athletes? Ideally, one would conduct a random assignment experiment to examine the relationship between participation in school sports and student outcomes. We would randomly assign a group of students to experimental (participation in varsity sports) and control groups (no participation in varsity sports). But this is not possible in reality. Athletic ability cannot be randomly assigned. An experimental approach is simply not possible in this case.

I study the effect of varsity sports participation on student achievement using two econometric methods. The first method involves controlling for school fixed effects – aspects of schools, both observed and unobserved, that do not change over time. The second method relies on an instrumental variable strategy, based on a method first used by Eric R. Eide and Nick Ronan. The idea is to find a variable which correlates with being a student athlete – I used student height as in the Eide and Ronan study.  Intuitively, with a few exceptions like gymnastics or equestrian, it makes sense that taller athletes are likely to be better at sports and hence more likely to participate in them. This theory is borne out by the data as presented in Figure 1. The average athlete in the data is 67.3 inches or 5 foot 6 inches tall, 1.67 inches taller than the average non-athlete. Athletic leaders are even taller. 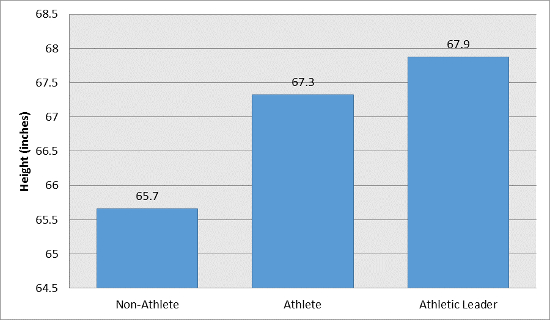 The data for this study comes from the High School and Beyond Survey (HSB), sophomore cohort, conducted in 1980. The HSB was published by the National Center for Educational Statistics and contains data on students, parents, schools, and performance on cognitive tests. One of the best aspects of the HSB is the wide range of examination data available that is available. HSB tested students in five different subject areas: reading, two mathematics exams, civics, science, and vocabulary. In addition to the measures of athletic participation and leadership, I control for several variables that have been shown by theoretical and empirical research to impact educational outcomes.

The results are significant in four examinations: in reading student athletes score 9 points better than non-athletes and in Math I 8 points, science, 13.5 points and vocabulary, 11 points. These positive benefits however are concentrated on female and Caucasian athletes. I also find that athletic leaders score better than non-leaders on every exam. The gain to athletic leadership is slightly less than 10 points in reading and Math I.

In an influential study in the 1960s, Sociologist James S. Coleman proposed that athletics and academic achievement behaved as a zero-sum game. In many schools, particularly smaller schools, Coleman argued that the inherent social system meant that it was important to be an athlete or a scholar, but not both. I find little evidence of this – students can have their cake and eat it too. Indeed, athletics and academics appear to reinforce each other. The skills developed as a participant or leader on an athletic team are useful in the academic sphere as well.

This article is based on the paper ‘Athletics, Athletic Leadership, and Academic Achievement’ in Education and Urban Society.